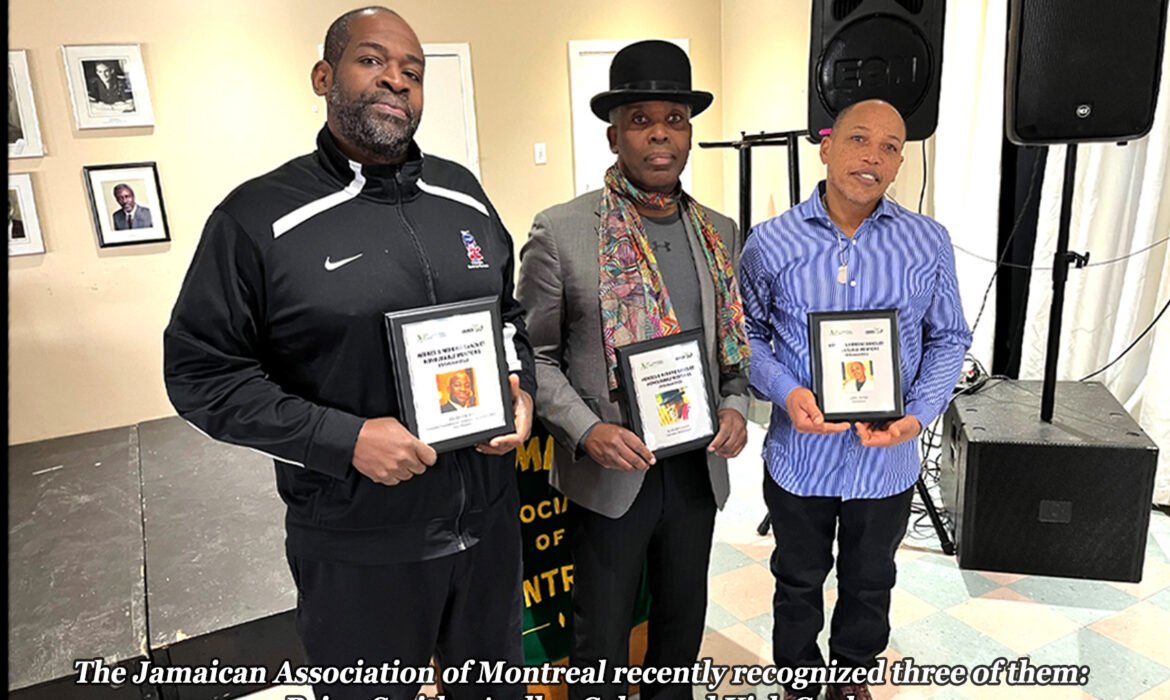 Audley Coley, Kirk Gayle and Brian Smith recognized for their efforts to lift others

Audley Coley, Kirk Gayle and Brian Smith have become well known in our community just by their but they have also made their mark on Montreal through their individual efforts to empower and improve the lives of others.
The three, who claim Jamaica in their heritage were honored late last year by the Jamaica Association of Montreal for their work, some of which extend beyond our community and well into the realm of Canada-wide recognition.
Coley has become known across Quebec and indeed across Canada for his contributions in changing the conversations around mental health awareness. As a familiar face and voice on the Bell ‘Let’s Talk’ initiative on mental health, he’s continuously advocating for more openness and clarity around the disease.
His book, ‘Audley Enough’ first published about nine years ago has been reprinted and has become a part of the conversation on the affliction identified as bipolar disorder and he has appeared also CBC Television’s “You Can’t Ask That” show.
Coley, who born in Jamaica but spent much of his life in Canada, living and working in Toronto, Montreal as well as in Nunavut became known for prowess as a dancer and personal fitness trainer. In this city, he has worked extensively with the highly prestigious Atwater Club.
Gayle, an emerging entrepreneur prefers to do his good deeds away from the glare of the public spotlight but is equally passionate about helping people through difficulties.
As the new owner of Barry’s Rustproofing, Gayle has his hand filled with the challenges of maintaining the landmark enterprise that was built and sustained for decades by the inimitable businessman Barry Dan, but it does not deter him from finding time to assist those in need.
Over the past couple years, he has made it his business to lend a hand to students whose parents had difficulty paying their fees at basketball summer camps, especially at the Shawn Browne Summer Basketball Camp.
“It was important for me to find ways to help some of those students because one of my sons benefitted from the guidance they received at the camp,” says Gayle, a father to four boys. “So, by helping others, it’s a way for us to give back.”
Over the years, Gayle has been seeking out single parents to offer them special gifts for the Holidays and beyond. Recently eight families received $100 Walmart gift cards to assist with back-to-school supplies.
What’s most important to him, he says, is to do his good without the fanfare.

“The aim is not to show people at their lowest but to help.”

Brian Smith brings a powerful presence in the arena of financial literacy, standing as the vice president of the Canadian Foundation for Economic Education (CFEE) and a board member of the CFER— Riverdale Centre de Formation et Recuparation, Training and Recovery Business Centre.
He is best known in the community as the driving force behind the Monnaie Money Financial literacy project, which for the past 10 years has been hosting its annual flagship show that features performances by up-and-coming artistes from across Montreal for cash prizes.
The event is also an opportunity to share the basics of financial literacy with the many young Montrealers who jam-pack the Oscar Peterson Concert Hall every year.
Over the past two decades, Smith’s passion for assisting young Montrealers strengthen their awareness around financial issues has led him build alliances among the community, nonprofit organizations, governmental agencies, educational institutions, foundations and the private sector.
Smith , who worked for many years at Carrefour jeunesse-emploi de Cote-des-Neiges in Montreal, also has an extended track record in employment and career counseling and entrepreneurship services for young adults in the Greater Montreal area.
At a year-end photo-op event, Mark Henry, president of the Jamaica Association of Montreal, reiterated his organization’s pride in being able collaborate with the three do-gooders, whose work should be a source of pride to all Montrealers.