Advertise with Us
Home News Lifting the curtain on blackface

Lifting the curtain on blackface 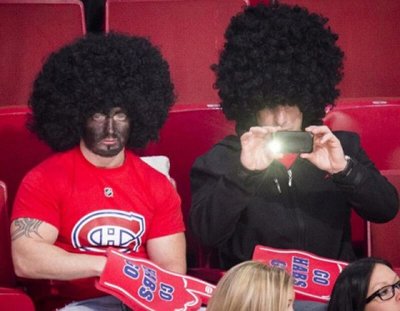 As a reporter, my job is to stay neutral and report both sides of any given conflict or story. We are trained to seek out balance, and to deliver it by presenting opposing perspectives. A large part of our job, as journalists, is to observe.
Since December, a controversy has been simmering – and lately intensifying – in Quebec over blackface.
In an annual satirical year-in-review production at Théâtre du Rideau Vert, a white actor depicted Montreal’s beloved Habs defenceman, P.K. Subban, by darkening his face with makeup.
Was it a harmless, humourous sketch innocuously employing face paint as a practical and legitimate theatrical disguise, or was it a crass and culturally-insensitive faux-pas that harkens back to the dark days (forgive the pun) of minstrelsy when Blacks were gleefully mocked and outrageously stereotyped by white actors taking to the stage, skin slick with shoe polish?
Was this truly blackface (insert scandalized reaction proclaiming racism here), or was it simply stage makeup (insert defiant reaction dismissing racism here)?
I, as well as many others, have been observing this conflict with keen interest. Anyone who’s been reading comments on social media or on newspaper websites knows just how heated this debate has become. It can be observed that, at times, the debate ceases to be constructive and the discussion descends into little more than acrimonious and egotistical bickering, peppered with personal attacks.
The most vociferous arguments on both sides of the debate were in response to opinion pieces written by white male columnists – columnists who defended the practice, denounced it, grappled with it, or explained it within the context of an Anglo/Franco cultural divide regarding what’s considered racially offensive “chez nous” and elsewhere.
Seeking out various viewpoints on this contentious issue, it occurred to me that in a situation such as this one, it would be interesting to hear the perspective of a Black newspaper columnist. A columnist, of course, being someone who is paid to regularly tackle the topical issues of the day and help shape public discourse through informed opinion. But then I was struck with this realization: I don’t know a single one at a mainstream daily newspaper in Quebec.