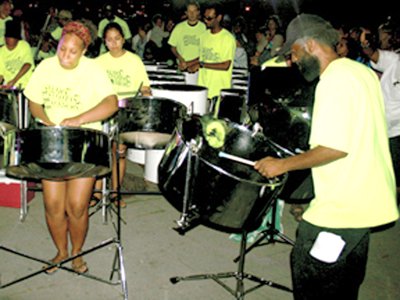 For more than a decade, Salah Steelband Academy has perched itself on the pinnacle of steelband competitions in Canada, with 6 national titles (including 4 consecutive) in Toronto to go with its 10 victories in Montreal.
On Sunday, August 9, the band will have an opportunity to prove its mettle against the best in the world when it competes in the International Panorama Competition in Trinidad and Tobago. The competition will be the featured event in a week of activities that run between August 2-9 and will include an international conference on the steelpan.
Based on its stellar track record, the Academy, under ace arranger Salah Wilson, was one of 30 steelbands from around the world chosen to participate in the inaugural event, which will be staged in the country where the instrument was forged and perfected.
Twelve of the competing steelbands will be from T&T, acknowledged as the “Mecca Of Pan” and the other 18 have been drawn from among the best in Asia, Europe, New Zealand, North America and the Caribbean.
After dominating Canada for many years, Salah, a virtuoso who recently completed his Master’s degree and is on his way to a PhD in Ethnomusicology at York University in Toronto, sees it as an ideal opportunity to pit his skills against the top arrangers in the world.
“Indeed it’s an honor for us to be chosen to compete with the best, and I’m confident that the Academy will represent Montreal in the best way possible,” he told the CONTACT.
However, Salah says he will need the best players in the city to be part of the band making the trip to T&T, and he is inviting all pan players who want try their hands at it to get involved.
He says because of the nature of the competition, each player must be prepared to play at the highest level. The song of choice is a 2015 composition titled “Outta de Box” written by T&T’s Scion Gomez and Mark Loquan and sung by Shanaqua.
Pan Fantasy of Toronto is the other Canadian steelband chosen for the competition.
Montreal pan players interested in playing with Salah Steelband Academy at the international Panorama Competition in T&T should call (438) 875-1426, or 1-647-832-4820.