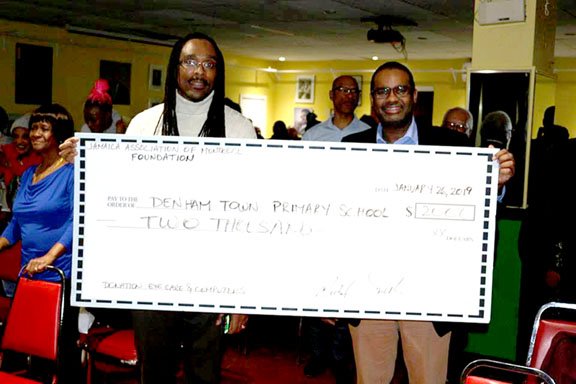 Campaign launched to raise funds for primary school in Kingston

Following a 2017 visit by Jamaica’s minister of Local Government and Community Development, the Honourable Desmond A. McKenzie, officers and members of the Jamaica Association of Montreal committed themselves to more outreach in their home country.
So when George Grant, honorary consul for Jamaica at Montreal, indicated the need among many students at Denham Town Primary School for eye care services, which could not be met by parents, the association decided to do something about it.
In summer 2017, Grant, and the association’s 1st vice-president Mark Henry visited the school and met with the administrators and students to assess needs and better understand the situation.
Those needs morphed into areas, which now include eye care services and computers.
To this end, the Association has embarked on a fundraising campaign to raise $10,000, which they say will continue until this goal is reached.
The official launch took place on January 26, with the Uptown Gospel Concert that featured a line-up of Montreal’s top gospel voices including Sophia Sinclair-Campbell, Zina Edwards, and Mark Henry, which placed $3,000 into the coffers of the newly established foundation of the Association.
In June 2019, Grant and some members of the association plan to visit Denham Town Primary again, this time to start the process of disbursing funds to suppliers for eye care and the purchase of computers.
As the campaign continues, the association is calling on the community and all Montrealers to assist in making a difference in a child’s life in Jamaica.
All donations made by cheque should be made out to the Jamaica Association of Montreal Foundation and sent or brought to 4065 Jean Talon W. (H4P 1W6). Donors who give more than $25 will receive a tax receipt for 2019.