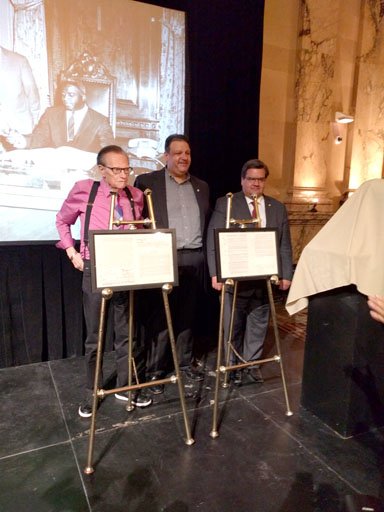 Two contracts signed by Jackie Robinson over 70 years ago during his playing days were unveiled at Montreal’s City Hall on Wednesday, June 22nd. The contracts, one from the Montreal Royals of the Independent League and the other from Major League Baseball’s Brooklyn Dodgers, are valued at $36 million. A bust of Robinson was also unveiled during the ceremony.
Montreal mayor Denis Coderre, television and radio host Larry King, and Mykalai Kontilai, the owner of the contracts and founder of Collectors Café, were among the guests on-hand for the ceremony.
“I got goose bumps,” said Coderre after the unveiling. “The fact that Jackie Robinson had [these contracts] in his hands.”
“Jackie Robinson is probably one of our greatest icons, one of our greatest models,” Coderre continued. “He was able to make sure that no matter the colour of the skin, you can fulfill your dreams.”
The documents were originally obtained by a Brooklyn historian not long after Robinson signed them, and were locked away in a safety deposit box before they were acquired by Collectors Café. It isn’t clear which contract is worth more, but according to Kontilai, after consulting with experts, the Montreal contract has more historical value.
“Everyone goes ‘Brooklyn, Brooklyn, colour barrier’, right?,” said Kontilai. “These aren’t valued at $36 million because they’re sports documents, they’re documents of freedom.”
Larry King grew up in Brooklyn, New York, and has fond memories of Robinson.
“I loved watching him play, loved watching him steal home, which he did seven times in one year,” said King. “He changed the game. I loved watching him play. He added an excitement to the baseball game. It was an extra dimension.”
Robinson spent the 1946 season with the Montreal Royals, a minor league affiliate of the Brooklyn Dodgers, where he posted three home runs, 40 stolen bases, 66 runs batted in during the 124 games he played. In his lone season, Robinson and the Royals won the Junior World Series.
“He told me the best year of his life was [in Montreal],” said King. “Never saw prejudice here. Was always treated well in Montreal was a great player here, was Rookie of the Year. Montreal is forever etched. It’s not only a beautiful city, but it’s a city that has had racial harmony for a long time.”