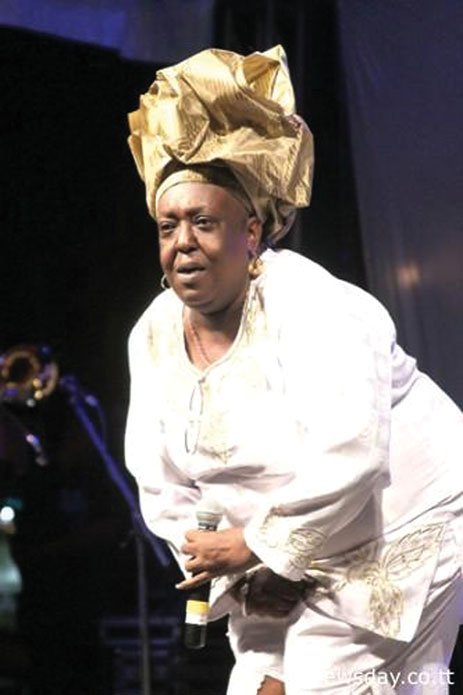 In annals of calypso in Trinidad and Tobago, Singing Sandra (Sandra Des Vignes Millington) stands as an icon for her achievements and contributions to an artform that was once dominated by men and machismo.
Today, she remains the only woman to win the coveted Trinidad and Tobago Calypso Monarch title twice, in 1999 and 2003, but even important in the eyes of many is her uncompromising voice for female empowerment and on behalf of the marginalized. Her songs Dignity and Voices From the Ghetto are pieces de resistance on those two fronts.
Sandra grew up in Morvant, a bedroom community just outside of Port of Spain awashed in musical creativity. A veteran, Dr. Zhivago, drew her into the calypso arena in 1984 the following year she was recruited to Mighty Sparrow’s Youth Brigade tent.
In  1987, she won the National Calypso Queen title and won it a second time in 1992.
Then came her two mega hits in 1999, “Song for Healing” and “Voices from the Ghetto” which stamped her name on the national title, and she followed up in 2003 with another mark on the title with “For Whom the Bell Tolls” and “Ancient Rhythm.”
Sandra made a very successful visit to Montreal in the late 1990s and comes back by popular demand on Sunday, Nov 23, at 6767 Cote Des Neiges. The event is titled The Power of woman, The Power of Song. Joining Sandra on the bill is Lady B, Singing Designer, Sheryl, Ezra Lewis, Master J, The Grenada Ensemble and ACD Drummers.
Masters of ceremony for this Caribbean Expression production will be Jaalie, and Carlos. Info. (514) 699-3591, (514) 369-2082, (514) 595-3901.