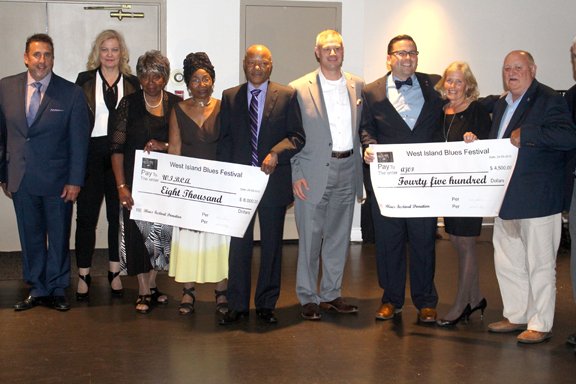 This year marked another important milestone in the partnership between the West Island Blues Festival and the West Island Black Community Association (WIBCA), which has been the main beneficiary of proceeds garnered by the popular summertime music extravaganza.
On September 24, the Blues Fest made a hefty donation of $8,000 to the coffers of the community organization, which was founded in 1982 to provide a range of educational, social and recreational services to all residents of the region.
The presentation was made at WIBCA’s annual banquet, which this year celebrated the association’s 34th anniversary.
Two other West Island-based organizations also benefited from this year’s proceeds: Action Jeunesse de l’Ouest de l’île (AJOI), which received $4,500 towards working with at-risk youth in the area, and the Alzheimer’s Group, which also received $4500 to help raise awareness on the various forms of dementia that afflict so many around Montreal.
In the 13 years that the Blues Fest has established itself as a signature summertime event in the West Island, WIBCA has been the main beneficiary of its community outreach efforts, receiving more than half of the $117,000 donated.
The money has helped the association consolidate the wide-ranging set of objectives in its service to West Islanders that include spreading awareness on health issues, particularly those common among the various cultural communities in the region, and providing outreach services to youth, adults and seniors.
WIBCA also prides itself as the only community organization that owns a building for operational purposes.
Errol Johnson, founder of the Blues Festival, says it’s an honour to be able to support an association that has made itself an important institution in our community.