Tristan and Letitia make History at the METAs 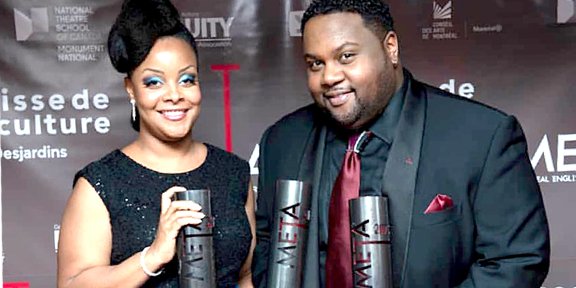 When the Montreal English Theatre Awards (METAs)were handed out on October 14, Tristan D. Lalla and Letitia Brookes did what has never been done before.
They became the first husband and wife to walk away with the top awards in their categories, snagging   the META for outstanding actor and outstanding actress respectively for the role in the Black Theatre Workshop presentation of The Mountaintop.
In an interview with the CONTACT, the young actors, both children of our community,  spoke about what the win signifies for them.
Lalla, who has been acting for the past 20 years and comes from what could be described as an illustrious artistic pedigree (his grand father Rudolph Charles was a pioneer and leader of the steel pan movement in Trinidad and Tobago) has been blazing a trail of excellence on the acting circuit ever since.
And he has been prolific.
“I have done about 70 stage plays, acted in about 20 movies and has done voices for over 40 video games and other animations. I am pretty fortunate to work in all areas of performance.”
On his recent win he feels humbled for the award.
“I work really hard and it feels nice to be recognized for what I have been doing. It wasn’t always like this, when we were coming up it was difficult there wasn’t as much diversity and representation in acting,” he says.  “But today it is encouraging to see us not only be recognized but win awards for the work we do.”

Brookes, who graduated with a BFA in Theatre from Concordia University in 2012, says women in theatre have come a long way but have much further to go.
“And it’s still not a smooth sail for women more so black women.”
About her accomplishments at the METAs, she sees it as part of the on-going challenges.
“I am honored to have not only been nominated but to win in the Outstanding Actress category.
However, it wasn’t easy, as a woman doors and not waiting to open for you, you have to keep knocking and if they do not open, be prepared to create your own opportunities.”
Brookes started her own theatre company while still in school, Nu Spyce Productions, in 2011 which she used to stage the production of For Colored Girls Who Have Considered Suicide, where she was both producer and co-actor.
“I firmly believe in creating your own opportunities, with The Mountaintop, I took a risk and approached the Black Theatre to see if this is something that could be staged and they agreed.”
Brookes’ Theatre credits include Twelfth Night, The Lamentable Tragedy, The Sound of Cracking Bones and To Kill a Mockingbird (Geordie Theatre Productions). Recent film and TV credits include The Gift, Zoe, Jack Ryan, 19-2, Being Human, The Will and A Stranger in My Home. She was a member of Black Theatre Workshop’s 2013/2014 Artist Mentorship Program, and was honored with the 2014 Gloria Mitchell-Aleong Award at BTW’s Vision Gala.
She enjoys working with her husband Tristan, and says they are able to push each other and bring out the best in each other.
“And its easy to get comfortable around one another because we familiar with each others nuances.”
And she says if the opportunity arises, they will be happy to share the stage with each other again.
In winter of 2019, Tristan and Letitia will be bringing The Mountaintop to theatres in Ottawa.
More information at BTW 514 932 1104