THE INTRODUCTION OF GRACE TO Résidence Pearl & Theo 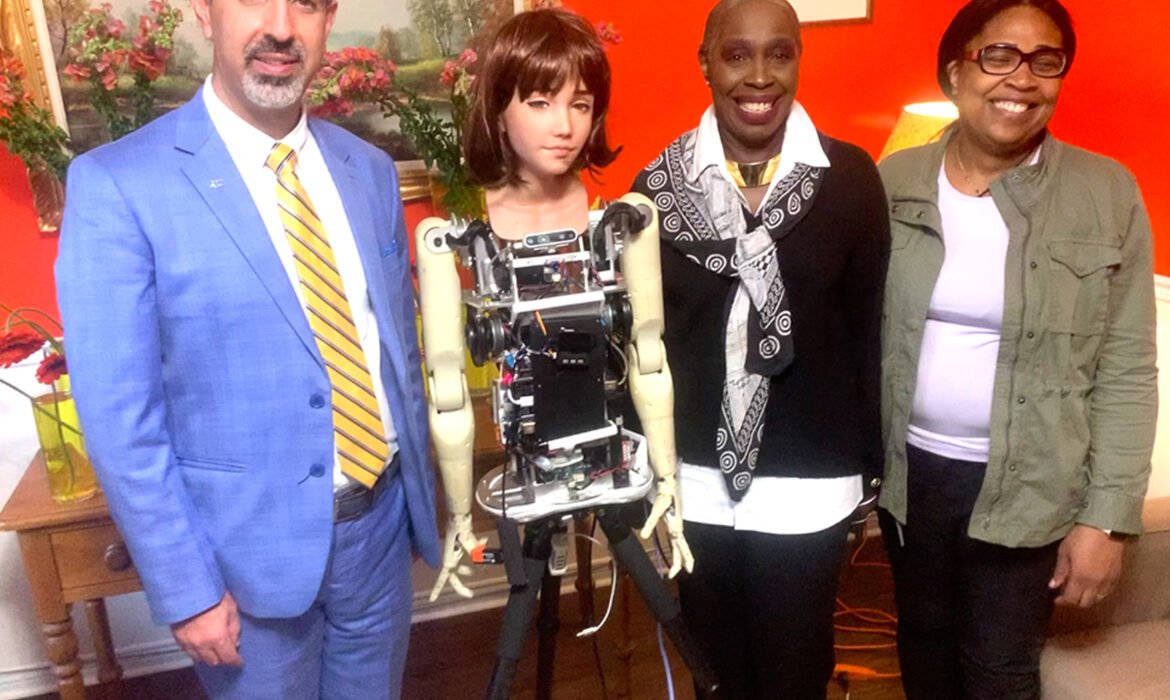 It was early afternoon October 20, and Grace-The Humanoid Robot was in her element among the seniors at Résidence Pearl & Theo in western Notre Dame de Grace.
She interacted with one of the residents of the long term care home, under the watchful eyes of her creators, a team of scientists and researchers from GeriPARTy Research Group, who are proposing that through those interactions with Grace, isolated older adults can experience a decrease in loneliness and improvement in their mental health.
Programmed to interact specifically with seniors, Grace is designed to engage in conversation, answer questions, tell jokes even do reading exercises by listening to people and generating responses from her expansive computer derived data base.
For seniors’ interactions with Grace takes on a more human like tone because she is programmed to move the yes the neck and hands.
The introductory experience at Residence Pearl & Theo was not as smooth as might have been expected with one or two… er … computer glitzes but Grace was in fine form fielding some of the questions that came her way.
One way or the other, the team in charge of the project has an eight week timeline to work out the kinks.
Grace will be making twice weekly visits to the residence (30-minutes sessions) to allow them opportunities to gauge ways to improve its interactions with seniors.
According to a statement from The GeriPARTy Research Group the aim of the project is to integrate human-like robots like Grace “to serve in retirement and long term care homes throughout Canada.”
Theodora Montoute runs Résidence Pearl & Theo, which has the distinction of being chosen out of many to host the pilot project.
She says the humanoid robot has a place in her industry today and in the future.
“Because the entire industry is so understaffed there’re times when we as caregivers are too busy to engage and interact with our residents, the robot can definitely fill that gap,” she told the CONTACT.
She and some of her clients will provide feedback to the GeriPARTy Research team of how to fashion the robots to best meet the needs of the seniors with whom they will be interacting with in the future.
The project marks another significant milestone for Montoute and the establishment that she and sister opened five years ago as an option to care for their ailing mother who was stricken with dementia.
Earlier this year Résidence Pearl & Theo was also chosen to pilot another project of significance to seniors. This time it was part of an Alzheimer project with the CIUSSS du Centre-Ouest-de-l’Île-de-Montréal.
Montoute says the fact that these health care institutions show confidence in her establishment means that she and her team are doing something right.
It was in February 2019, when she and Pearl, her younger sister purchased the business, which was a senior-care home serving kosher meals.
“At the time the business was at its lowest point but we were determined to rebuild it because there was no other option for us when it comes for our mother,” Montoute recalls.
She says in the weeks and months that followed, they worked non-stop bringing the place up to scratch.
“Those were very trying times,” she says. “It took lots of sweat, tears and lonely hours to make it happen but it happened.”
Montoute says in about a year and a half they were in a position to determine the type of service that they were best prepared to offer and were exceeding expectations.

“We were seeing growth in almost every area of the business: our annual income is moving in the right direction and most importantly our clients and their families are extremely contented with our service.
The truth is success came because our clients and their family believed in us and the path we were taking and they chose to remain with us throughout the difficult days.”

She also says the business, with a clientele of 12 and a cadre of loyal and hard-working staff is well-positioned to continue to grow.
She recalls that in 2021, upon the passing of her mother she was prepared to sell the business and return to her previous life as a part-time entrepreneur and a little bit of a global jet-setter, but was convinced not to by a professional in the industry.
Today, Montoute and Résidence Pearl & Theo stand as an example of dedicated entrepreneurialism fuelled by a desire to provide the highest level of service to those in need.
And with Grace the robot as part of the future, it looks brighter.