The Door Closes at JCCWLM 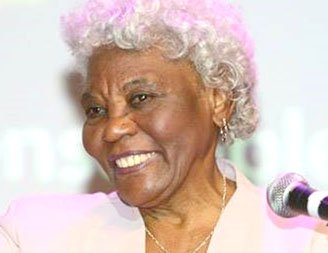 For fifteen years and six months Miss Ivyline Fleming fought the good fight in the community development arena. She did so at a time when many of her peers were caught up with the challenges of aging and health related issues.
She was well into her 70s when she founded the Jamaican Canadian Community Women

‘s League of Montreal Inc. (JCCWLM)  with an objective that was simple and honorable: “I was committed to enhancing the lives of women of all ages.”
That was back in 2001 and she spent almost every working day since striving towards that ideal by using the organization as a forum to foster educational and social growth among its members and other Montrealers.
In so doing she touched the lives of many who benefitted from the network she built with politicians from all levels of government as well as from the regular seminars, workshops, educational excursions and social events staged by the JCCWLM over the years.
She talked about “a feeling of satisfaction and contentment,” looking back over the years. “My only hope is that I made a difference in society,”she told the CONTACT in a recent sit-down at her offices on Queen Mary Road in Snowdon.
The offices were bare and the atmosphere was heavy.
You see, the interview took place in the week leading up to the dissolution of the JCCWLM.
On June 25, 2016, Miss Ivyline Fleming turned the key to door of the organization for the last time and is taking a long walk into the future, still committed to the cause of women in society and still driven by the call of community service but at 92 years of age she knows it time to move on.
She has only one regret.
“Ideally I would have loved for someone to take over and keep the dream alive but these days it is difficult to find people willing to take on the responsibility and accountability that goes with running an organization such as this one.”
So it is with a heavy heart that she has closed the doors.
Still stately and regal in her golden years, Miss Fleming walks away proud of what the JCCWLM has accomplished in just over a decade and a half on the frontlines of socio/political/education advocacy on behalf of women.
She is especially proud of the more than a dozen students who have benefitted from the $1000 scholarships that helped them through college and university in nursing and other health care related programs. Four students also received academic bursaries for their educational endeavors.
Then there were the recurring number of financial literacy programs and workshops that allowed youth, women in organization and others to benefit from the advice of experts.
Montrealers of all stripes and persuasions will forever remember the times spent at those signature events, including the annual banquets, galas, and the Pancake Breakfasts organized by Miss Fleming and her ladies at the JCCWLM.
Miss Fleming was a veteran community worker having been involved with the Negro Citizen Association alongside Dr. Dorothy Wills, who she credits being one of her mentors from the time she arrived in Canada in 1957 and then in 1962 with the Jamaica Association of Montreal Inc. where she served in various capacities for several decades having the distinction of being the only female president in the history of the organization.
She joined with four other like-minded women, Delrose Blackford, Peggy Faulkner, Maude Gordon and Valery Shakes to establish the JCCWLM because in her estimation, the environment was not conducive for the empowerment of women in the community or the city.
In her drive to build the organization and establish a foothold in Montreal, she was relentless in building a network of political contacts including approaching then Premier Jean Charest  to assist in her cause.
Her confidence and commitment enabled her to side-step the challenges along the way, among which were one or two detractors, but in her words: “Who God Bless, No Man Curse.”
“I really feel as if God created this opportunity for me to help others but to also show my abilities and I feel privileged to have been able to do it.”
Whenever the opportunity arises, countless number of women in our community and other Montrealers  have offered testimonies on the impact that Miss Fleming’s work has had on their lives.
Boston University trained community worker and financial literacy advocate Brian Smith who is currently the Vice-President of the Canadian Foundation for Economic Education, has had firsthand experience on the power of Miss Ivyline Fleming when it comes to “making things happen.”
He has been working with her as a consultant and assistant at the JCCWLM since day one. Working alongside Miss Fleming for the past 19 years has been a great learning experience.  It is also great when a senior and a younger person can work together to help the community.
“She is an excellent role model. In fact other women look at her as the Queen,” he told the CONTACT.
“I have learned a lot from her over years. She has an amazing capacity to make things look easy by doing it right.  However I think what everyone admires in her over the years has been her commitment and consistency. People saw that she was always willing to make the necessary sacrifices for her community.”
To carry on the work with financial literacy education, the JCCWLM has made a generous donation of $3000 to the Canadian Foundation for Economic Education to support their programming in the province of Quebec.
Now that she has decided to dissolve the organization that has been so dear to her heart, she says she is aware that the task is unfinished but she did as much as she could and she did it with dignity, class and pride.
She would like to thank all the board members, members, supporters and friends of the JCCWLM who contributed towards its success:  “May God bless you all.”
It’s safe to say to Miss Ivyline Fleming  the community  “wishes you all the best as you have given us your best.”