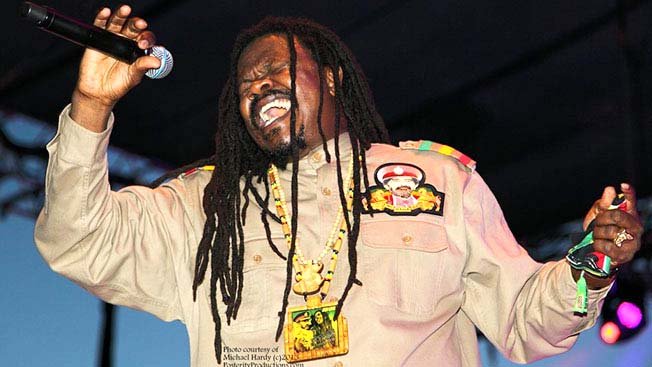 The Messenjah will be at the Food Factory

After almost three decades on the music circuit, Luciano stands today as one of reggae’s most revered artists.
In addition to an outpouring of adulation from fans the world over the singer, defined by music that is conscious and inspirational, has built an impressive international profile that include:
• receiving the “Key to Kansas City” in 1999
• receiving an Order of Distinction from the government of Jamaica for his outstanding services in the field of entertainment
• his landmark performance leading the Royal Philharmonic Orchestra in the Netherlands in 2014
• the naming of “Luciano Day” in Hartford, Connecticut in 2015, and unverified reports that
• In 2010, Luciano was reportedly gifted a parcel of land for residence in the Gambia by President Alhaji Dr. Yahya Jammeh.
Here in Montreal, fans do not have such illustrious gifts, but they sure do love and adore the man they call the Messenjah, who caught the attention of reggae lovers in the early 1990s with a collaboration with Freddie McGregor with a do-over of “Shake it Up Tonight.”
Two years later, his debut album ‘Where There Is Life’ announced to the world that the man born Jepther Washington McClymont, now known as Luciano or “Luchie” to his true, true fans, was for real.
From that album came a number of timeless hits like ‘It’s Me Again Jah’; ‘Who Could It Be’; ‘Lord Give Me Strength’ and ‘Your World and Mine’, all of which soared to #1 on charts around the world.
Following that album, music fans so impressed by his enchanting voice, his ability to hold his own on a variety of instruments such as the guitar, flute and piano, it was easy to see that this guy was destined to ascend into the realm of superstardom.
What followed was a meteoric rise to greatness that took him to concert halls and outdoor stages in front of hundreds of thousands of fans on every continent – Africa, Asia, Australia, Europe and North America.
He secured Grammy nominations in 2002 and 2016.
Today, 40 albums later, Luchie still can elevate audiences to the clichéd “higher heights” with his inspiration and soul-searching lyrics and entrancing melodies.
Last year, he released the long-awaited album entitled “In The Name Of Love.”
Luciano is no stranger to Montreal, but it doesn’t matter when last he has been here because his is always a welcomed presence in this city for music fans.