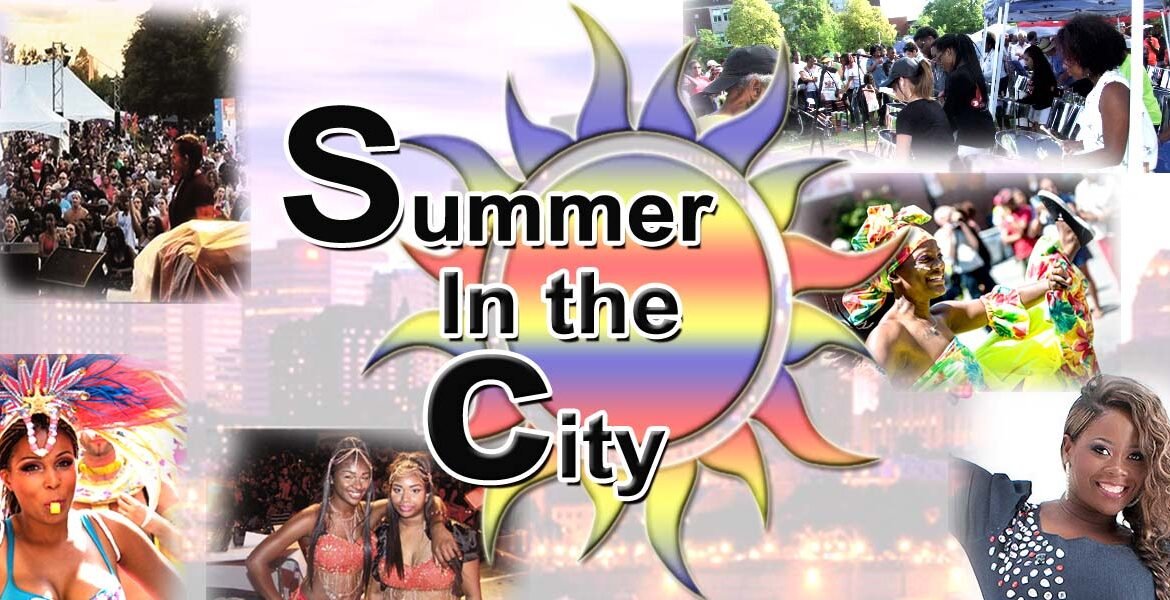 SOLEIL : THE ULTIMATE OUTDOORS FETE
Party in the sun with the beautiful people

On Sunday, June 30, fete-loving Montrealers will gather at 5020 Saint Ambroise Street, in St, Henry on the edge of Cote St. Paul for Soleil, one of the biggest outdoor all-inclusive parties of the year.
In addition to the non-stop dancing there’ll be food, a variety of drinks and lots of beautiful people.
To ensure a good time, organizers are bringing one of top systems, Sonic Boom and The Jugglers Sound System will keep the music pumping all day and the fun will be in adequate supply.
The best option is to buy your early bird ticket as early as possible because this event, presented by Soca Survivors represents the future of fun in the city.
Call for those tickets now 514-415-4683, 514-746-3103

West Island Blues Fest at Dollard des Ormeaux Park on June 15
Freddy’s Back: There will be dancing… lots of dancing

Organizers are bringing back to the stage of Montreal’s fastest growing outdoor event, the West Island Blues Festival Freddy James and The Freddy James Project, in what they deem to be by popular request.
The festival, celebrating its 16th edition this year, takes place on June 15.
For two years, 2016 and 2017, the extraordinarily popular James and his group brought a spectacular energy to the festival that had audiences on their feet for much of the evening with an extended repertoire of soul and funk music.
On June 15, they will be back to headline a line-up of top acts at the Dollard des Ormeaux Park in the West Island. Joining them will be Brian Greenway, Deacon George, The Third Stone, Big J and the All Starz and the enchanting Sylvie Desgroseillers.
The Chicago-born James moved to Montreal as a child with his mother Geraldine Hunt, a star on the North American music circuit. He was 12-years-old when he released his first self-titled album and first mega-hit, “(Everybody) Get Up and Boogie” which earned him two Juno nominations.
He went on to make a few films and stage appearance before touring the USA, Europe and Asia.
Freddy’s return to the WIBF is sure to bring a spark to the thousands that have made the event part of their early summer routine, as they enjoy a day of family fun and feast before dancing the night away under the stars.
Now in its 16th year, the WIBF, founded by well known community entrepreneur and Dollard Des Ormeaux city councilor, Errol Johnson, has become an integral part of the West Island community, involving several of the major municipalities as partners, while sharing its profits with groups and associations in the area.
Over the years, it has handed out tens of thousands of dollars to organizations such as the West Island Black Community Association, West Island Women’s Shelter, the Alzheimer’s Group, AJOI a group serving disenfranchised youth in the West Island and Literacy Unlimited.
For more information, visit www.westislandbluesfestival.com.

‘Come for Fun, Feel the Love’
Every year without fail, they gather by the thousands at Brown’s Bay, Mallorytown, in Thousand Islands, Ontario, for a day of fellowship, renewal and fun with their compatriots and friends.
The park is transformed into a carnival of activities: hundreds, maybe thousands of colourful tents housing entire families from babies to grannies; deejay music blaring, smoke-spewing BBQs and the ubiquitous and inviting aroma of food; entrepreneurs and their booths hawking everything from clothes to arts and crafts and activities for kids, above it all the endless din of Vincy conversations.
The annual Vincy Unity Picnic has become a heritage event in Canada that draws people from cities across North America, sometimes the Caribbean and Europe.
It started in 1999, with groups of families from Montreal, Toronto and Ottawa, coordinated by the various associations representing nationals of St. Vincent and the Grenadines, and blossomed into what many has determined to be one of the biggest outdoor events in Ontario.
This year, as it has been for the past two decades, they will gather again on the third Saturday of July, on July 20, renew old acquaintances and share a plat of food or a drink.
They will be there from as early as 7 AM and spend the day, until 6:00 PM, then make their way back from whence they came.

Marking its 38th anniversary, Jamaica Day stands as one of the longest standing outdoor events in our community.
And year after year it never fails to offer Montreal families an authentic taste of the Caribbean paradise that is Jamaica: its culinary delights, the arts and crafts that helps to define it, and most importantly its music.
So it will be come July 13, for another Jamaica Day at Parc Jean-Drapeau as part of this year’s Les Weekends du Monde celebrations.
In addition to all the attractions, including the endless supply of jerk chicken, jerk pork, escovitch fish, Jamaican patties, as well as other Caribbean ‘tasties’ and drinks, the day will be flavored by music.
This year, organizers have pulled out all the stops, bringing in Iba Mahr, one of Jamaica’s leading reggae stars.
Mahr is one of Jamaica’s leading voices on the conscious and cultural reggae as well as lovers’ rock scene today.
He is a child of the St. Catherine district in Linstead, where he tiptoed on the reggae circuit in 2008, while still at university. His first two singles were respectably received and led to his first album, Diamond Sox, in 2015.
Along the way, he copped the Jamaica ‘song of the Year award’ in 2014.
Over the years, he has appeared on some of Jamaica’s biggest reggae stages and with some of the biggest artistes, including at Reggae Sumfest, Rebel Salute, Sting, Western Consciousness, and Air Jamaica’s Jazz and Blues Festival. He also toured extensively, from Europe to the USA and the Caribbean.
Sharing the stage with this reggae icon will be several top-rated Canadian performers, including the acclaimed Kaisha Lee, Jason Valentino, Mysta (Ottawa) Gospel dynamo Zina Edwards, as well as foundational roots band INUSASO. Other Montreal acts will also be there, including Corey Don, Salah Steel Pan Academy and West Can Folk Performing Company, Sativa Sound and DJ TLC.
High-energy performer King Shadrock will once again host the day of activities.
Doors open at 2PM. FREE Admission all day. For more information jamaicaday@jam-montreal.com or 514-737-8229.

The excitement at last year’s Spice Island Cultural Day was intense as thousands of Montrealers enjoyed everything Grenada, from its food to its music to its spicy atmosphere.
Well that was just a primer for this year’s celebration, which takes place on July 13 at the same venue in Little Burgundy, Vinet Park. Except this time festival-goers will be enjoying the scene in the presence of the country’s prime minister, Dr. The Right Honorable Keith Mitchell.
Along with the PM, three of Grenada’s leading calypsonians and Soca stars, King Scholar, Shortpree and Kenny C will make the trip to share A Taste of the Spice (this year’s theme) with Montrealers.
Joining the line-up will be several of the community’s big time performers, such as Doggies, Love Man Kent and Delta Antoine, as well as Jab Jab Orchestra and West Can Folk Performers.
Ted Blaize, who is now serving as president of the Spice Island Cultural Day Association, which organizes the event, is eager to share what the event has in store for Montrealers.
“From the beat of the steel drums, Soca, Calypso and Reggae artists, dancers adorned in feathered carnival costumes, Children Corner with Bouncies and face-painting, and Grenada cultural masqueraders, the second annual Spice Island Cultural Day is guaranteed to be exciting and fun for the entire family,” he says.
Another feature of the Day is the availability of a number of award-winning Caribbean rums that will be part of the mélange of drinks and other tasty delights to tantalize festival-goers. Several DJs will also be on hand to keep the music pumping all day long.
The event gets underway at 1:00 p.m. till 9:00 p.m. Free Admission.
Vendors are welcome. For further information log on to: www.spiceislandculturalday.com. Call (514) 620-6612.

After a two-year hiatus, Trini Day is back, and organizers say it’s bacchanal time.
The event, which has grown to be one of Montreal’s biggest outdoor parties, attracts tens of thousands to Parc Drapeau for a day of family fun. It will be held on Sunday, July 7.
And as if to compensate the two years of postponements, organizers have been offered a prime location on the island, at Zone De La Corinne (the site of the popular Osheaga Festival) in close proximity to the metro for this year’s Trini Day.
They promise a full day of activity from 2 PM to 10 PM and what is usually referred to as the culture of Trinidad and Tobago will be on full display. That means endless Soca, calypso, chutney and steelband.
Early in the day, children will take centre stage with performances by young dancers, drummers, singers and masqueraders. Then a line up of heavyweight performers from Montreal and Toronto is expected to fill the evening with action before the massive outdoor party with DJ Professor gets underway.
As it has been for the past decades or so, there will be thousands of flags in the air.
Even as the Red, Black and White will be flying high, Trini Day will be a celebration of Montreal, and the call is for all to join in the day of fun, and that’s why organizers urge people to represent their country by showing off their national colors.
Info.: 514 334 0270 or 514 929 9235

On Saturday, August 10 and Sunday August 11, CEGEP Andre Laurendeau will be transformed into an Island In The Sun for the 2019 Montreal Invitational All Fours Round Robin Tournament and the Caribbean Extravaganza that comes with it this year.
Organizers say while teams from across North America, mostly Toronto, New York, Florida and Boston fight for the thousands of dollars that are at stake on the inside, the parking lot outside will be transformed into a massive island fete.
There will be booths selling everything and there’ll be a massive stage with live performances by calypsonians, steelbands and other musicians and dancers keeping the party going all day. There’ll also be a children’s corner to ensure a weekend of family fun.
.For information call 514 487 8953

For decades the Westmount Seventh Day Adventist Church
stood as a beacon of hope in our community, a place to worship and celebrate family events.
These days, the structure is not as solid as it was with parts of the building becoming a little unstable. That’s why some of its members have been embarking various fundraising initiatives to assist in shoring things up.
This year, their annual Fundraising Summer BBQ takes place on Sunday, June 23 at 11 Bethune St., Kirkland H9H 4H3 from 11:00 AM. And organizers are promising a variety of West Indies dishes will be on the menu in addition little bits of entertainment. Non-stop music will be supplied by DJ 610.
Tickets for this event will be $30 for adults and $15 for children. Contact: Patricia Beckford 514-236-3127, Ann Spence 514-603-7632

-International Fireworks Loto-Québec La Ronde (June 29 – July 27) Parc Jean-Drapeau, Montreal, QC
The 35th edition of the fireworks competition can be enjoyed on Wednesdays and Saturdays from the Old Port or Jacques Quartier bridge.

The largest international comedy festival in the world.