Advertise with Us
Home News Leaders stake out their ground

Leaders stake out their ground 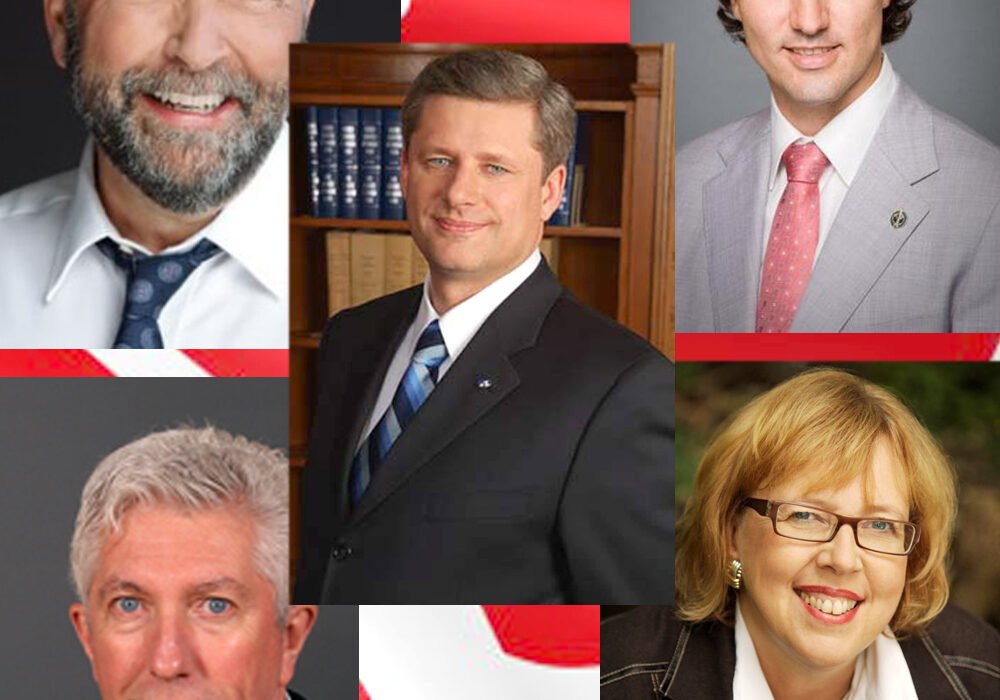 It’s still very early in the marathon campaign leading up to the October 19 federal elections, but early polls show Prime Minister Stephen Harper is in for a tough run as Canadians lean towards the NDP to form the next government.
One poll gives the NDP as much as an 11 point lead on the Tories and 15 points on the Liberals in the days following Harper’s visit to Gov. Gen. David Johnston asking him to dissolve Parliament and launching Canada’s longest election campaign in recent history.
But for the most part, a round-up of reputable polls shows a more even split among the three parties with the NDP holding solid   between 30 and 34 per cent; the Conservatives scoring between 28 and 33 per cent, while the Liberals hold steady between 25 and 26 per cent.
Those numbers mean that over the next weeks or so, Harper and other leaders Tom Mulcair of the NDP and Justin Trudeau of the Liberals will be doing their best to convince voters that his party is best positioned to deal with priority issues for Canadians.
Those priorities seem a little different for each.
In launching his campaign, the prime minister warned voters about “risky plans that could harm our future”
“Canadians will make a critical decision about the direction of our country, a decision with real consequences, a decision about who has the proven experience today to keep our economy strong and our country safe,” Harper said.
However, his appears to be an uphill battle, as Canadians seem to have grown wary of his promises in the face of an impending recession and a number of scandals that have tainted many of his appointed senators and his party in recent years.
He is also being widely criticized for calling the elections so far in advance of the set election date, a move widely believed that gives his deep-pocketed Conservative Party a chance to out-spend the other parties in the advertising battle. A claim from which he doesn’t shirk, taking the opportunity instead to reinforce the dominance of his party, which has been in government the past ten years.
“In terms of the advantages this party has, in terms of the fact that we’re a better financed political party, a better organized political party, and better supported by Canadians — those advantages exist whether we call this campaign or not.”
For Mulcair, this is his first federal campaign. He became leader of the NDP in 2012. Not surprisingly he zeroed in on the economy, employment and a better deal for middle class Canadians as the defining issues of the campaign.
“We will kick-start the economy and get Canadians back to work. This is our number one priority,” he was quoted as saying as he launched his campaign.
Also, he holds steady to the core principles of the NDP, quoted at a recent campaign stop saying:
“I am so excited for the progressives across Canada to work with the progressives in Quebec.”
And he talked about tax breaks for small and medium-sized businesses creating more jobs and implementing a federal minimum wage of $15 per hour.
Trudeau is off to a decidedly unspectacular start in the campaign but the “big red machine” of the Liberal Party and its capacity to reach Canadians means he cannot be written off.
He continues to lag in the polls and is finding difficulty getting traction on the issues, especially with Mulcair nudging the NDP closer to the centre of the political spectrum, but his popularity with Canadians remains a factor in this race.
He launched his campaign in the heart of Stephen Harper’s Nation Alberta where the Conservatives hold all but one of the ridings.
And he went on the attack.
“When the plan isn’t working, the real risk is sticking with the status quo,” he was quoted as saying about the current government.
Trudeau even targeted Harper’s accomplishment or lack thereof on the province’s economy, the oilsands, and the accompanying issues of pipelines. He told Albertans Harper didn’t much to show and was bad for business.
“Instead of a better future for Alberta’s energy industry, Harper’s divisive diplomacy pitted western Canada against everyone else, including our American allies,” Trudeau said.
At 44-years-old, Trudeau is the youngest by far of the three leaders, (Harper is 56 and Mulcair is 60) in these early days of the campaign. Many are reacting to how he is being slighted by the two older men.
Both Harper and Mulcair insist on calling him by his first name and not his surname. The suggestion being that they are afraid of the popularity of the Trudeau brand.
Green Party Leader Elizabeth May started her re-election bid by attacking the prime minister’s decision to launch an extended campaign, which she says is going “to cost Canadians tens of millions of dollars more.”
Stephen Harper has been the leader of the Conservatives since 2004. In the 2011 elections, they won 166 seats with 39.5% of the vote.
Thomas Mulcair was elected leader of the NDP in March 2012 following the death of former leader Jack Layton. In the last elections the NDP became the official opposition with 103 seats. Justin Trudeau became leader of the Liberals in 2013, succeeding Michael Ignatieff. They only secured 34 seats in the last elections.
At the dissolution of Parliament, the Conservatives held 159 of the 308 seats in the House of Commons, compared with the NDP’s 95 and the Liberal Party’s 36.
The Bloc Québécois, the Forces et Démocratie party and the Green Party had two seats each. There were also eight Independent MPs and four vacant seats.