GNAM CELEBRATES 50th WITH AN EVENING OF ELEGANCE 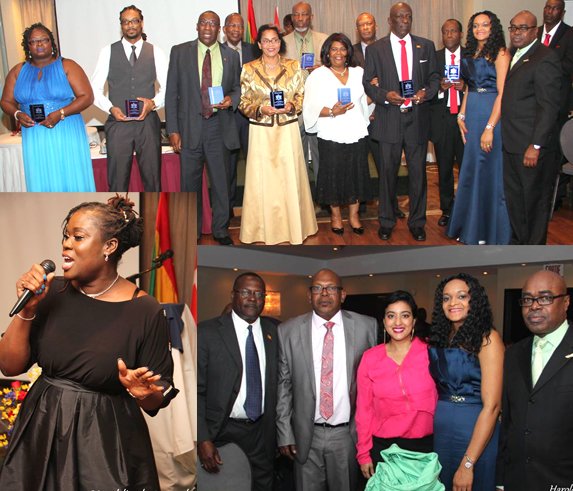 On Saturday, October 15, approximately 200 patrons dressed up in their nice “dandan” defined elegance as they joined officers and members of the Grenada Nationals Association of Montreal in a celebration of its roots and 50 years of activities by paying homage to founding members, past presidents and the Grenadian community.
The event, which was held at the Holiday Inn on Cote de Liesse, was described as “one for the books”, which had patrons raising their glasses for a celebration. It started with a Red Carpet cocktail reception followed by dinner and presentations. The theme of the night was “Giving Thanks and Acknowledgement to Our Founding Members and Grenadian Community.”
Following the invocation by Reverend Jim Bennett and a welcome address by association president, Karen Parke-Bernard and Derrick James, Consul General for Grenada in Canada, gave the keynote address and extolled the importance of volunteerism and giving back to community.
Madam Anju Dhillon, MP for Dorval—Lachine—LaSalle delivered a congratulatory message from Prime Minister Justin Trudeau. Five Montrealers were recognized for their dedication and contribution to the association and the community, including  Ms. Hermes Cobb, Mrs. Lona Williams, Mr. Roosevelt Alexis, Dr. Bertha Pitt-Bonaparte, and Mr. Eric Llewellyn, who recently passed away.
Several past presidents were on hand to accept service awards, including Mr. Kenny Calder, Mr. John Cruickshank, Mr. Peter “Uncle” Charles, Ms. Theodora Davis, Mr. Osbert Greenidge, Dr. Bertha Pitt-Bonaparte, Mr. Desmond Williams, Ms. Joan Berkeley, Mr. David Lewis and Ms. Claudine A. Noel. Ms. Shaaira Alexis’ plaque was accepted on her behalf by her son Khaliyl. Mr. John “Spanky” McMillan’s posthumous award was accepted by his family.
The event was not only an occasion for guests to meet and reconnect with family and friends, but also an opportunity to reminisce with a photo-slide presentation of activities and events over the years.
The gala affair was punctuated with music by big name Montrealers such as Martin Albino on steelpan, who played during the cocktail hour, and Delta Antoine-Parris, Constantine Greenaway, and Joey the Saxman.
Ms. Christiana Davis, a past president and Honorary Consul served as master of ceremonies.
Several high profile Grenadians such as Leonard Wharwood, Honorary consul  of Grenada in Montreal, Theodore Blaize deputy Honorary Consul, and John Cruickshank, former Honorary Consul were also on hand for the evening.
The association takes the opportunity to thank all who helped to make the event a great success. The include Ms. Sharon Baptiste (reigning 40 plus Queen), Mrs. Hilarie Cruickshank, Mrs. Rita Alexander-Samuel, Ms. Joan Berkeley, Ms. Nicole Swann and the author of this article.
The evening was captured by Toronto photographer, Mr. Harold Chitan.