G’da diplomatic team on the move 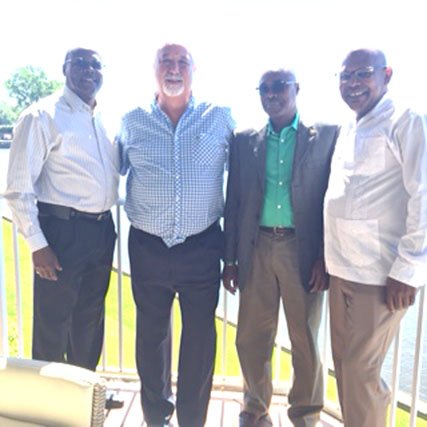 New Services for Grenadians in Canada. Job opportunities for nationals at home

It was an action-packed weekend for Grenada’s Consul General, Ambassador Mr. Derrick James, as he made an official visit to Montreal, Quebec, 500 kilometers from his base in Toronto, Canada.
The visit began on Friday, June 17, with the launch of what is described as a new focus for Grenadian seasonal temporary workers in Canada.
The Ambassador led a diplomatic team comprising of, Honourary Consul for Grenada in Montreal, Mr. Leonard A. Wharwood and Honourary Deputy Consul for Grenada in Montreal, Mr. Theodore Blaize to St. Paul D’Abbotsford, a two-hour drive from Montreal to visit VERGER THOMSON FARM.

The 500-acres apple orchard employs several Grenadian nationals in Canada on the Temporary Foreign Workers Program (TFWP). It is listed within the top three apple producers in Canada.
The diplomats had a meet-and-greet with Mr. Dean Thomson, the owner of VERGER THOMSON FARM and held discussions which lasted over an hour. One very positive aspect of the visit was the offer by Mr. Thomson to set up a meeting of the Farm Owners Association and the Consul General sometime next month, to garner further support for the Canada/Grenada TFWP project.
Optimism is high among Grenada officials, at home and in Canada that the current effort will lead to an increase in the numbers of Grenadian coming to Canada to work on farms.
On Friday evening, a meeting was convened at the residence of a group of 13 Grenadian male workers, whose work day ended around 5:00 pm. The conversation was very open and cordial as Ambassador James and others in the delegation discussed issues that affected the workers such as medical insurance, sick benefit and the general working and living conditions.  Contrary to some recent bad press about TFWP, there were no complaints or negative aspersions related to the working and living conditions of the nationals, many of whose first tour dates back to 2010 and before.
On the Saturday morning, with president of PlayMas Montreal, Gemma Raeburn –Baynes, as the facilitator, Montreal’s  impresario Sheldon Kagan invited the team, led by Ambassador James, to a breakfast meeting at his home in Dorval.
Mr. Kagan who, for the past 35 years is recognized in Canada for producing and promoting some of the largest shows and wedding expositions,  has the potential to enhance Grenada’s tourist product as a wedding destination. Both Sheldon and Linda Kagan, now retired, made it clear that they were not motivated by money but see this an opportunity to give back.
Later in the evening, the team – attended the Grenada Nationals Association of Montreal annual harvest. The Ambassador was introduced as making his first official visit to Montreal and proceeded to address the nationals and friends of Grenada, Carriacou and Petite Martinique.
Ambassador James urged nationals to contact the offices in Montreal and Toronto, saying he and his team are here in Canada to serve the people of Grenada Carriacou and Petite Martinique.
He also outlined his vision and the enhanced services the office of the Consulate General will offer to nationals, not only in Toronto but throughout Canada.  Apart from the usual Passport renewal service, Mr. James itemized some of the additional as:
* Nationals are no longer required to produce a police report stating the loss of their Passport
* Nationals are no longer required to pay a lawyer for an Affidavit attesting to the loss of the Passport
* The new services now available at the Consulate General provide Grenadian applicants with their requests for birth certificates, death certificates, emergency travel documents, and others.
The Honourary Consul in Montreal has always assisted nationals with their application for a new Passport or the renewal of one. But, as of June 18, 2016, the Consulate for Grenada in Montreal will offer additional services such as
* Deputy Honourary Consul Blaize, with his certification as a Commissioner of Oaths in Quebec, will prepare and sign an applicant’s documents requesting a new Passport to replace a lost or stolen Passport
* Applications for birth or death certificates
* Applications for police certificate of good conduct.
In Montreal, nationals should contact the Mr. Wharwood or Mr Blaize for the application forms and assistance to complete the said forms.
The Grenada Consulate in Montreal has embarked on new sustainable services to nationals in the seasonal temporary workers, in conjunction with the office of the OECS, with periodic visits to the farms. It is the intent of the Consulate Offices in Canada to always offer and assist nationals with new and improved administrative services.