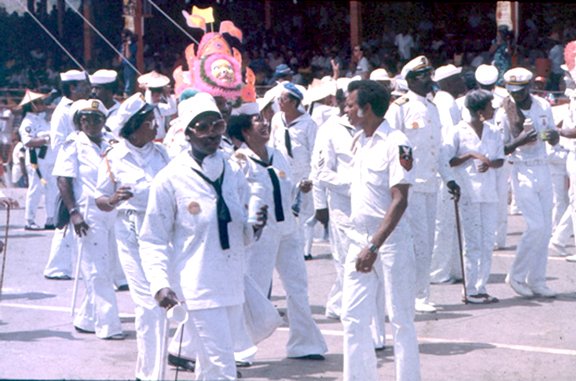 For Carifiesta 2016, the streets of downtown Montreal will be awash with the traditional sailors of carnival, as a group of mas lovers have made it their business to bring back a taste of traditional masquerade to our summertime parade.
Helen Baptiste, one of the coordinators of the newly established FrienZ Mas Band, says she and her cohorts Gary Johnson and David St. John have been planning for the past two years to bring this touch of excitement to the local carnival.
“Sailor mas’ has been around for a very long time, well before the 1880s (and…) is today, still one of the most popular traditional mas played in Trinidad and Tobago at carnival.”
The band is called Sailors Ashore, and will be accompanied on the road by Trinidad Playboys Steelband and, as is usually the case, it is expected to be a magnet for people seeking to have a fun time in any carnival parade because of the free flow of sweet music, things to drink and food with pepper.
Baptiste says the band will also have some visual appeal, as it will be lead along the parade route by a Moko Jumbie (stilt walker), which is another traditional staple of carnival.
Sailors Ashore will be launched on April 23rd at 4410 Westhill in N.D.G from 5:00 to 9:00 PM, and organizers are inviting mas lovers, culture lovers and the general public to come by to browse some of the pictures. Contact us at (514) 234-8549, d.village@sympatico.ca. Visit our website www.sailorsashoremtl.ca.