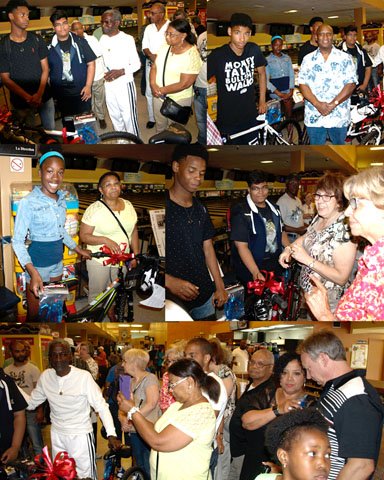 Every kid should have a bicycle to move around the neighborhood

Four students in the community are feeling a lot better about themselves this summer after receiving spanking new bicycles from the Producers III and Friends, a group of Montrealers committed to helping those around them.
Two of the four, Tayah Austin and Jacob Williams are students at LaSalle High School, while Edron Johns is of Union United Church, and Altamash Sheik is from Notre Dame de Grace. They were chosen to receive the gifts by Carole Reddick who teaches at LaSalle High.
As it was last year when two other students received bicycles, the presentation was made at the annual Bowling Tournament at the Rose Bowl Bowling Lanes in NDG on Fete St. Jean, June 24.
Speaking at the event, Ronnie Williams, the driving force behind the initiative encouraged the students to exercise caution as they enjoy their new gifts.
He told the Contact that it is gratifying to see the excitement of the youngsters and the appreciation of their parents.
“I believe that kids should have a bicycle to move around their neighborhood,” he says. “Parents can’t thank me enough.”
In turn, he thanked the many individuals and families that donated towards the cause, especially the Christmas family, former Montrealers now living in Ontario, who donated a bike. They also committed to donating one in the coming years.
But according to Williams, much of the money comes from donations made from those participating in the Bowling Tournament. He sends out about 70 invitations and says the response is always “very encouraging.”
Each bike they purchase cost around $220 and the gift package include a helmet, a lock and a kickstand.”
The Producers III Group also includes community workers Wayne Thomas and Ronnie Durant.
And for the past couple years they have been donating to the ALS Society on behalf of the Kenny Rockhead Pool Tournament. So far $3,600 have been donated toward that cause.