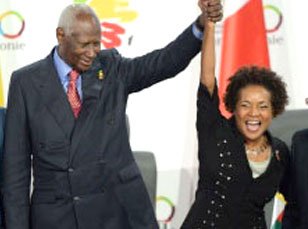 Four years after her tenure as governor general of Canada ended, Michaëlle Jean is set to assume the position of secretary-general of la Francophonie.
The Haitian-born Jean was named to the position on Sunday, November 30 at the summit of French-speaking nations in Dakar, Senegal.
In becoming the first woman and non-African to secure the position, since La Francophonie was created in 1970, the 57-year-old Jean had to beat back challenges from five candidates vying to replace Abdou Diouf, who stepped down after more than 10 years on the job.
Her mandate will run for four years.
Following her appointment, Jean said in a statement: “I am very excited to work with all these women and all these men who make and live the Francophonie daily.”
She was also quoted as saying that a sharply focused economic strategy can provide “new relevance for la Francophonie… countries, peoples and civilizations came together by doing business together, by exchanging economically together.”
Her nomination which was unanimous among the 57 members, followed her extensive campaign to secure the job and is also seen as a big score for Canadian Prime Minister Stephen Harper, who together Quebec Premier Phillipe Coulliard and New Brunswick Premier Brian Gallant, backed her campaign and travelled with her to the summit.
Harper expressed his enthusiasm over Jean’s appointment and it’s potential for the future in a statement.
“She will embody the renewal and modernity that la Francophonie of the 21st century needs, and will listen to heads of state and government and their citizens,” he said.
Canadian Gov. Gen. David Johnston also issued a statement.
“We are confident that she will fervently and passionately defend not only the French language and culture, but also respect for the shared values of peace, democracy and human rights that have solidified the belonging of each nation in la Francophonie,” he said.
Jean was born in Port-au-Prince on Sept. 6, 1957, during the era of the Duvalier dictatorships in Haiti. Her family moved to Thetford Mines, Que., in 1968.
She attained her undergraduate degree in languages and literature from the University of Milan and Literature from the University of Montreal. Her Masters is in Comparative Literature.
Before carving out an illustrious career as a broadcast journalist with CBC and Radio Canada, Jean taught Italian Studies for a brief period at University of Montreal.
On August 4, 2005, she was approved as Prime Minister Paul Martin’s choice to become Canada’s governor general, the first person born in the Caribbean, the third woman and fourth journalist to hold the position.
On November 8, 2010, she was appointed by the Secretary-General of the United Nations to serve as special envoy to Haiti for the United Nations Educational, Scientific and Cultural Organization, for a four-year term.
Since 2012, she has been serving as chancellor of the University of Ottawa.
Her appointment to La Francophonie is expected to heighten the profile of the organization in North America.
La Francophonie, which has 57 members and associated member-states and 20 observer nations, was formed to promote economic development among members and the French language around the world.
It has been likened to the Commonwealth.