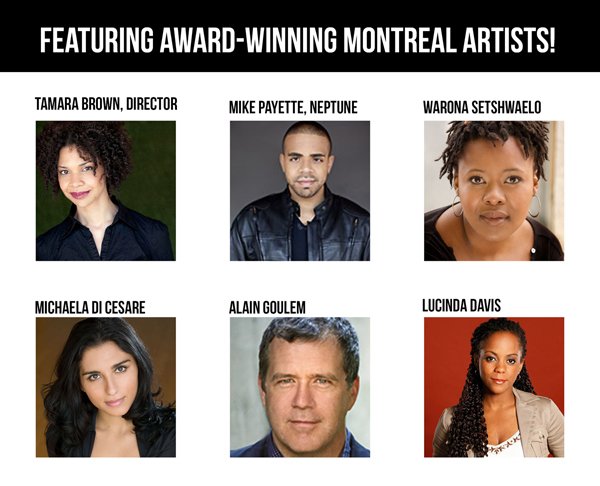 On Monday May 4th, as part of their annual Discovery Series, Montreal’s Black Theatre Workshop will be presenting a staged reading of Leah-Simone Bowen’s The Hallway.
Taking place just a few years after the Harlem race riots, during a stiflingly hot summer, The Hallway is a sultry portrait of the lives of five people living in a boarding-house above a juke joint in 1930’s Harlem.
The CONTACT spoke with The Hallway’s director and Black Theatre Workshop’s artist-in-residence, Tamara Brown, about the need to showcase diverse voices in theatre and the magic of coming together to tell a story.
Brown, a graduate of Concordia’s Theatre Performance Program, has been working with the Black Theatre Workshop since 2004. Her own career is a testament to the importance of the kinds of spaces and opportunities being provided by the BTW for Black Canadian playwrights, director and actors.
Formerly operating as an amateur theatre group known as The Trinidad and Tobago Drama Committee, BTW was established as a non-profit in 1972, and for the past forty-three years has been committed to promoting unheard and underrepresented voices in Canadian theatre.
The need for diversity in theatre is a dire one and programs like the BTW’s Discovery Series are crucial for both the producers of theatre and audiences, who are hungry for new perspectives.
As Brown explains, there is a whole cross-section of society that is not being represented in the arts and when we do not see ourselves represented, we are denied of our humanity and we are rendered invisible.
This is why it is essential that we support organizations like the BTW, who make the conscientious effort to avoid the status quo. Not only are stories like The Hallway necessary and relevant, they are also fascinating and wonderfully rendered. By keeping the cost of tickets to only $12, the Discovery Series is an accessible way for Montrealers from all walks of life to experience the joy of theatre.
Though it is set in 1936, Brown believes that audiences will relate to the characters of The Hallway. There are no heroines or villains, only people, flawed and marginalized, but great in their humanity. Though much has changed since 1936, in many ways so much has stayed the same.
At the tail end of the Great Depression, during a time of racial unrest, police brutality and economic uncertainty, the sense of alienation and longing to connect felt by the characters of The Hallway will surely resonate with contemporary audiences.
But it is not all darkness, the play takes place at the end of the Harlem Renaissance; a movement that revolutionized African American arts and culture, and the characters in The Hallway, like all of us, are on a journey to carve out their own stories in this uncertain world.
For Brown, this is what makes theatre so unique. It engages the audience so they become part of the story themselves, coming together for a specific moment in time in a way that can inspire real empathy.
A staged reading of The Hallway will be presented at the MAI Café, at 3680 rue Jeanne-Mance. Call 514-932-1104 to reserve tickets. You can also reserve tickets online at www.blacktheatreworkshop.ca or by visiting BTW on Facebook or Twitter @BTW_Tweets