Celebrating Port of Spain in Montreal and T&T 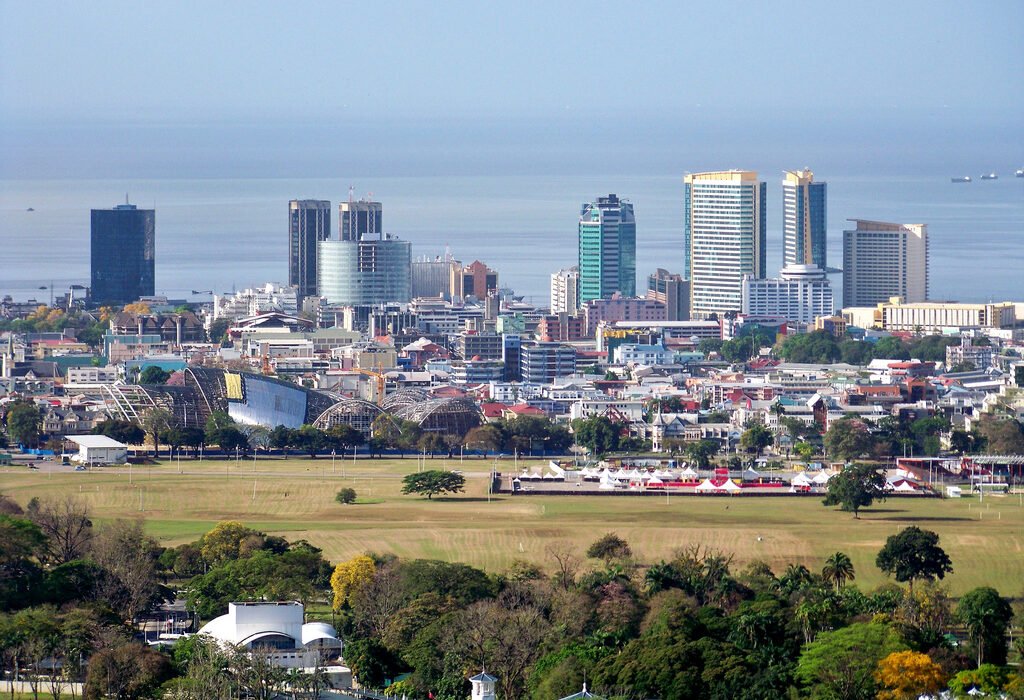 When the mass of Montrealers, young and old, gathered on Park Drapeau on Ile St. Helene to participate in the annual Trini Family Day (Montreal in Harmony), they found themselves also celebrating the 100th Anniversary of the founding of Trinidad and Tobago capital city, Port of Spain.

Organizers Cecil Alfred and Arnold Paris say it was important to mark the milestone here in Montreal because of the role that Port of Spain has played in the development of steelpan, calypso, chutney and soca, the musical culture of Trinidad, which fuels some of the biggest festivals in cities across North America.
The celebration was marked by the cutting of a grand 100th Birthday cake supplied by Sister Lee of the congregation at the Church of God of Prophesy and a special tribute to the city together with the flying of the flag of Port of Spain alongside that of this city.
In Trinidad and Tobago, Raymond Tim Kee who was appointed mayor of Port of Spain last November is set on ensuring that POS consolidates it status as the regional economic capital.
He points to a number of infrastructural changes that have been put in place by former mayors and under the “2030 Vision” as put forward by former Prime Minister Patrick Manning as evidence of the city’s forward-looking stance.
“It was under that vision that we began to see a change in the face of the city, and a change in the skyline, especially with the construction of the financial complex which provide space for multi-nationals and other international investment agencies,” says the 66-year-old former businessman, who also serves as president of the Trinidad and Tobago Football Association.
He says that it is because of the “2030 Vision” Port of Spain was able to host several world class events such as the Fifth Summit of the Americas whose guests included U.S. President Barack Obama and U.S. Secretary of State Hillary Clinton and the Commonwealth Heads of Government Meeting in 2009 and the Commonwealth Business Forum two years later.
However, he says there is a lot more to be done in order to push the POS forward to take its place among top cities in the world.
Addressing the ever-present question about crime that continues to hurt the image of the city and cripple businesses around POS, Tim Kee says his plan will include dealing with some of the root causes that are driving young people into lawlessness, which include education, training and poverty.
He says part of his mission is to continue the work of his predecessor, Louis Lee-Sing, and improve in areas of order and control in the downtown core and surrounding areas of Port of Spain.
“I’m committing myself to an overall beautification project together that will include dealing with street vendors, installing parking and helping the mass of homeless and vagrants that populate the city find their way,” he said.
“As mayor, I’ll do my part to continue to improve Port of Spain, but I’ll also demand that those who do business here are just accountable in helping to keep it clean and business and family friendly.”
Tim Kee added that his mission will be incomplete if he doesn’t instill in residents and those who work in Port of Spain a sense of ownership.
“Once they realize that they are part owners of the city, they’ll take better care of it.”
Nestled on the northwestern coast of T&T, Port of Spain is bordered by the towns of Cocorite, Movant Beetham and the Gulf of Paria, and is home to about 380,000 people.
In a city with an abundance of parks, playgrounds and green-spots you’ll find spots like the Queen’s Park Oval, the Savannah, Woodsford Square, Brian Lara Promenade and culture houses like Queen’s Hall and the National Arts Performing Academy (NAPA).
It has also grown into an economic and financial centre not only to T&T, but the English speaking Caribbean and is home to many of the region’s top financial agencies and banks.
Not only are most of the country’s government departments located in Port of Spain, but it is also a shopping and business hub for Trinis and others across the Caribbean.
The city is also a sporting and cultural activities’ locale with some legendary names in both domains located there.
In addition to the many iconic calypsonians, soca stars and musicians that are based and perform out of Port of Spain, several world-renowned steelbands such as Desperadoes, All Stars, Renegades, Phase II, Starlift and Silver Stars have all combined to add to the glory of the city.
The Port-of-Spain City Corporation was proclaimed the municipal authority of the city of Port-of-Spain by the Governor on June 25,1914.
Celebration of its 100th Anniversary was launched in June with a long slate of activities that included a Miss City of Port-of-Spain pageant, Mayor’s Ball, an interfaith service at the Holy Trinity Cathedral and a major steelband parade that included 26 bands on the streets.
Tim Kee hopes to have the celebrations continue all year.
On August 31, Trinidad and Tobago marks its 52nd Anniversary of Independence.