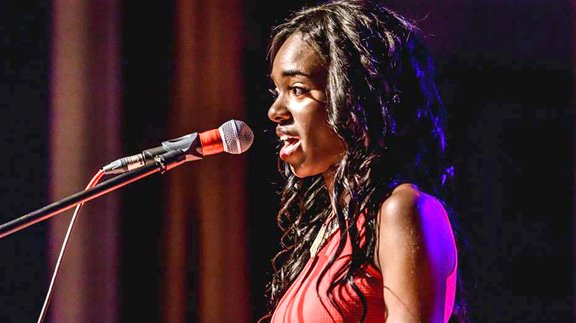 On April 23, Montrealers have another opportunity to stand with those who are going through life facing daily challenges, when second annual Born To Rise Show comes to the Crawley Arts Centre in NDG.
Show organizer and founder of the organization Aiesha Robinson, has chosen the theme:  “Everyone you meet is fighting a battle you know nothing about. Be kind. Always…” upon which the event is built this year.
And she’s anticipating a strong show of support, especially after the success of last year’s event.
“Last year’s show came out to be exactly as I envisioned, I achieved my goal to have our mixed audience touched by the stories of our speakers (who spoke) of being abused, surviving cancer, being bullied, dealing with weight issues, different stories that gave each of our audience members a chance to relate, empathize in one way or another,” she stated in a release to the CONTACT.
“Along with speakers, we had amazing performances that sent uplifting messages. It was a show fit for all ages that brought in some amazing reviews. It was touching.”
Robinson, now in her mid-20s was diagnosed with the skin disorder, vitiligo when she was 18, opening a new chapter in her life.
Vitiligo (say: vi-til-eye-go) a disorder caused by the absence of melanin in certain areas of the skin, which leads to irregular shaped white spots on different areas of the body. It can be acquired at any age.
Last year, in a wide-ranging interview, she told the CONTACT she first heard about the affliction because of Michael Jackson, who famously brought it into international prominence and also had a grandfather with it.
It opened a traumatic chapter in her life.
“Some would stare, others would have funny looks on their faces, especially in social settings such as night clubs and parties, all of which made me feel very bad… I cried a lot.”
Aiesha says there were also times when, because of her appearance, she
faced various forms of discrimination.
She says her struggle with vitiligo has made her realize that many other young people are dealing with their own issues… so she wants to use the experience she has acquired to help.
She launched Born To Rise as a way to reach those dealing with vitiligo and other issues.