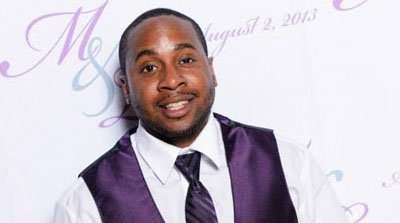 book by its cover.” It’s a clichéd saying, but it is vital in understanding the origins of the tenacity and ambition that has powered 35-year-old Little Burgundy native Denburk Berky Reid for most of his life.
He’s founded initiatives benefitting Montreal’s youth and created the Montreal Community Cares Awards to honor the people making this city a better place – Reid believes we are all put on the earth to make a difference, and he’s been hard at work leaving his mark.
His story begins in earnest with the basketball court at the former Campbell Park, installed when he was 11. That year, he received a basketball as a gift from his father and began heading to the park to learn the basics.
That summer, he enrolled at the Trevor Williams Basketball Aca

demy, where he really sharpened his skills.
But he wasn’t even considered for tryouts on his high school team, despite the fact that he did just fine playing against many of the boys who made the team on the outdoor courts.
The problem was his size. The coach felt he was too small – the first time the Denburk Reid book was judged by its cover, and it wouldn’t be the last.
In the eighth grade, Reid was named the team’s “water boy, team manager, whatever you want to call it,” he recalled, a role he says he tried to fill to the best of his abilities.
His big break came in a game where some of the regulars were missing and the coach needed an extra name to put on the roster. When one of the players found himself in foul trouble, Reid replaced him he scored two baskets in the last minute of the second quarter. After that, he became a regular.
“The guys were happy for me too because they knew I could play,” he said.
He tried to do most of his homework at school, he said, so his grandparents wouldn’t object to him spending his afternoons on the court. He was a numbers guy – he put them up on the court, and handled them with ease on a page.
He chose to attend Dawson College next, where he studied business administration, and where his basketball career was anything but smooth sailing.
He was to play on the triple AAA squad his first year but instead opted to join the double A team so he’d have more playing time. His team routinely steamrolled their competition, a feat some athletes enjoy, but not Reid.
“We weren’t pushed or challenged,” he said.
The following year he tried out for the triple A team and was cut. Reid suspects that once again, his height was the issue.
Reid considering switching schools. The Dawson Athletics brass got involved, he says. The coach apologized, saying she made a mistake cutting him in the first place. He sought advice, and was told that he shouldn’t play for a team that rejected him.
He decided to play for the team that rejected him.
“I took the harder way, knowing they don’t want you but making it work,” he said.
His play at Dawson was stellar – he was named an all-star, and captured MVP honours. His teams won championships all three years he was there.
While trying to choose a university to attend, he heard a familiar voice coming from his living room. Nevio Marzinotto, who months earlier had cut him from a provincial basketball squad because – you guessed it – he was too short, was trying to convince Reid’s grandmother that Reid belonged at McGill.
He couldn’t resist the challenge. He decided to go to McGill and show the coach, who would become a trusted ally, that he could “play some ball.” True to his love of numbers, he decided to study economics.
On Feb. 4, 2005, Reid became the all-time leading scorer in McGill history. A McGill Reporter story chronicling the feat noted he stood 5-foot-7, the second shortest point guard in the country at the time.
He still holds the record – 2,220 points in a five-year career with the Redmen.
Reid went on to play for the Montreal Matrix/Royals, a relatively short-lived semi-pro team, for three years. But while his playing career drew to a close, other doors were opening.
He was still in school when he started doing community work. He had a passion for mentoring kids, about basketball and about life having had so many mentors himself, he said. He eventually returned to coach at the Trevor Williams Basketball Academy, at Dawson and at McGill.
While at McGill, he started up a hip-hop dance troupe for youths and brought them in to perform at halftime during their games.
He tries to teach the teens he comes across not to settle, to always strive for more in whatever it is that moves them.
He tells them to treat people with respect, and always offer a helping hand because they never know when they may need one.
He landed his current day job, as community relations manager with the Montreal Alouettes, in 2010, which keeps him close to his sports background.
It was at the funeral for Paul “Bad News Brown” Frappier, the Haitian-born hip hop artist found dead in 2011, that Reid realized something else was missing in the community.
Funeral attendees commended Frappier’s dedication to community work, and Reid realized what a shame it was his work went largely unacknowledged until he died.
He decided too many people’s work went unrecognized until it was too late, so he created the Montreal Community Cares Awards to thank people for doing important work. The awards began in 2011 and the MCC Foundation, which oversees the awards as well as a dance leadership program, basketball program and more, was established the following year.
Despite what he’s accomplished, Reid says he’s nowhere near completing what he believes he’s been put on this earth to do.
“I’ll tell you, I don’t think I’ve achieved anything yet because my vision is so big that these are just steps,” he said.
For more information on the Montreal Community Cares Foundation, including their upcoming toy drive and how to get involved, visit: www.montrealcommunitycares.com