Otis takes success as far as he can 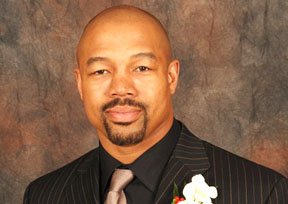 The evening is as go

od a time as any to reach Otis Grant, the retired professional boxer who now runs a gym in Dorval as well a foundation that helps the less fortunate.
It’s supposed to be a less busy time of day but he can’t extricate himself completely from what’s going on around him – partway through a phone interview with the CONTACT, he excuses himself to give someone instructions on where and when to pick up boxers coming into town for an event he’s hosting.
The 46-year-old wears many hats – as co-founder of the Grant Brothers Gym, he helps take care of the business started with his brother, Howard, more than 12 years ago: helping wannabe pugilists of all stripes figure out how to throw a good punch. They also started make and sell their own boxing equipment.
He is the namesake of the Otis Grant & Friends Foundation, founded in 1999 to he

lp support other organizations that help the less fortunate in Montreal.
And now as co-founder of Grant Brothers Promotions, he’s coordinating an upcoming pro-am event showcasing the best of his fighters.
He’s retired from the sport, but with all the endeavors he’s involved in, there’s never time to stop.
“The doors are always revolving. There’s always something going on,” he said.
Grant left professional boxing eight years ago, choosing to bow out of a remarkable his career on his own terms.
Driving home on a June evening 15 years ago, Grant had to act quickly when he saw a car hurtling toward his. He swerved and took the impact on his side of the car instead letting it hit the other side, where his friend and daughter were seated. He was in a coma for a week. He almost died.
Doctors said he’d never fight again, but he rejected the word “never.” He trained and worked and fought, and in 2003 he returned to the ring.
He fought another four years and retired in 2006 at 38 years old from a career that, taken altogether, included winning two North American Boxing Federation titles and the WBO Middleweight Boxing Champion of the World title.
The world of boxing promotion is he and his brother Howard’s latest venture.  They realized running their own promo business would make it easier to get the boxers they work with on fight cards. They’ve done three shows so far, and Friday, Nov. 7 marks their fourth Pro-Am show and their one-year anniversary.
The Grant brothers, originally from Jamaica, started in the boxing business at a young age, going on to represent Canada on the international stage.
“We grew up in this business and we’ve had success at every level, so people come to us,” he said. Case in point – a young boxer from Nigeria recently flew into Montreal to train at the gym.
Three years ago, they moved into a fitness complex in Dorval where they train recreational, amateur and professional-level boxers. They’re under the same roof as Monster Gym, which gives them great visibility, Grant said.
Boxing also afforded Grant the chance to make a difference in the community. He started the Otis Grant & Friends Foundation in 1999 after his accident – he was in hospital for a month and felt fortunate that he survived.

His story was all over the media. Soon after he was released from hospital, he was asked to help out with a food drive, and the drive was a success.
The foundation now gives out thousands of dollars worth of food, clothing, toys and other goods every year to people who need them, and supports organizations such as the West Island Palliative Care Residence.
It’s fuelled by donations and the charity events – hockey and softball games, dinners, golf and poker tournaments – they hold every year.
“I’ve been attached to it and it’s hard to walk away from because I know the work has great impact on the people who need that kind of thing,” he said
A Vanier College and Concordia University graduate, Grant also worked with youth at schools in the West Island for years, but when the gym moved in 2012, he decided to go on an indefinite leave. With a business, a foundation to oversee and a day job, something had to give.
“I became a jack of all trades and a master at none, so I’m trying to put a few things aside and try to master this business and see how far we can take it,” he said.
The gym is more than just a business. Grant says they have boxers who started with them as teens and are now grown and married. His and Howard’s Rasta friends come by and play dominoes on Friday nights and no one bats an eyelash. The Grants and their clients are a family.
And at the centre of that family are Otis and Howard, the brother team, an example of an exception to the “business and family don’t mix” adage, Grant says. They grew up together, they fought together, and they’re upholding the legacy they forged together.
“After being around this business and seeing how crooked and now underhanded and seedy this business can be, I feel fortunate that I can work with somebody that I have confidence in. […] I know he’s got my back, and I’ve got his,” he said.