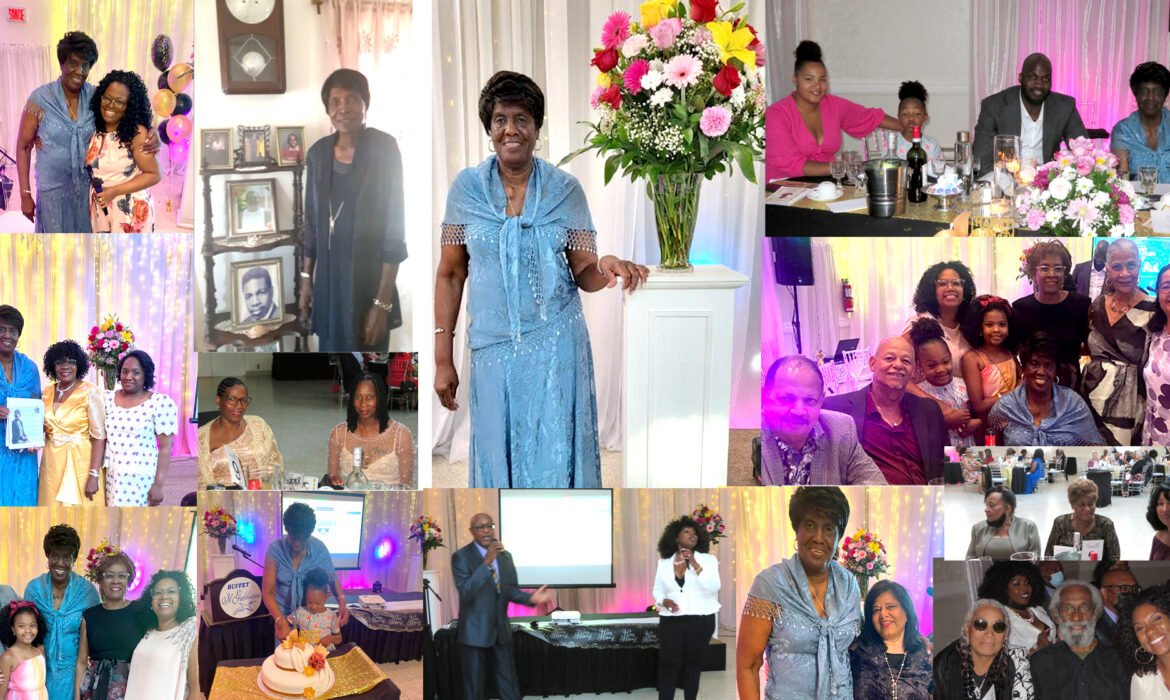 In celebrating her 80th birthday, Ms. Erene Anthony’s life so far is captured and documented as a “Journey of Faith.” For the roomful of friends and relatives that gathered on Friday, July 8, at Il Gabiano Reception Hall in LaSalle, her life-stories showed a journey marked by service to others and service to community.
Guests at the event enjoyed tributes by life-long friends and associates as well as relatives that traced the decades in the life of a woman, who made her mark as an educator, a spiritual leader, a musician, a parent and a grand-parent.
It all began in her native Antigua where she cultivated her love for teaching and service to the church.
She earned a certificate in Education from the University of the West Indies and ventured into the profession that was to be the cornerstone of adult life, teaching on the island for six years.
She also nurtured her commitment to the church at the Grace Bay Moravian Church where she served as the organist and director of the senior and junior choirs.
In Montreal her potential blossomed as an educator following a spectacular academic tenure that saw her earning a B.A in Sociology and Anthropology from Sir George William’s University; an M.A (Education) from Concordia University, a B.Ed. from McGill University and a diploma in the Teaching of Reading.
Ms. Anthony went on make her mark on the academic lives of generations of Montreal students, teaching for decades at elementary and high schools across the city before serving as an administrator in both sectors.
Her work as a spiritual leader also came into full focus at Union United Church where she served as chairperson of the Board and on various committees.
Since her retirement as an educator 18 years ago Ms. Anthony’s life has been revolving around her grand-daughter Jade.
She also makes time to serve on The Black History Month Round Table, The Antigua & Barbuda Association of Montreal, the Quebec Provincial Association of Retired School Educators, the United Church of Canada and the West Island Back Community Association (WIBCA) Chelaine Du Millenaire- an eight-member Foundation that funds a school in the remote regions of Cap Hatien, Haiti.
Along the way she became a licensed financial security advisor and still helps guide many Montreal families to a secure financial.
In the face of her many achievements and contributions, Ms. Anthony counts among her grandest “blessings” her role as mother to Joel, a former NBA player and CEBL team manager and adopted daughter Sherlette, a financial analyst and of course, Jade.
At the birthday celebrations guests were treated to an opening prayer and blessing of the meal by Rt. Rev. Bishop Kingsley Lewis of the Antiguan Moravian Church as well as performances by several local artists.
Joel offered a moving homage to his mom.
Also, virtual tributes poured in from relatives and friends from Antigua, Trinidad, England, the US and across Canada, including from her sister Florence who couldn’t make the trip from Antigua.
True to style, in her speech of appreciation Ms. Anthony laid it all at the feet of her savior in her prayer for continued good health and desire for on-going service to others.