Advertise with Us
Home News Community News We call him Hero. He says it was Divine intervention 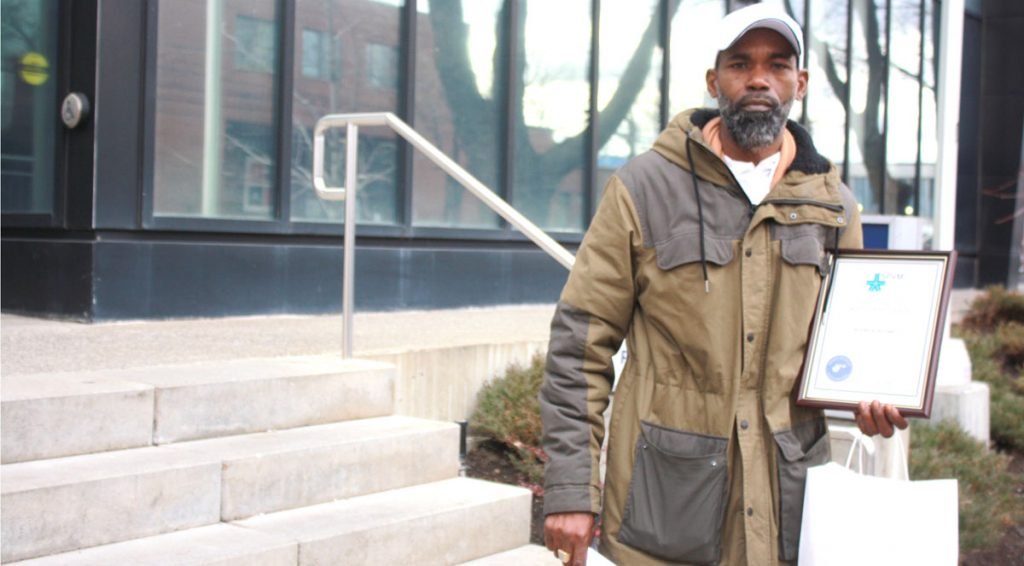 These days, going on two months after a life-changing moment, Roderick Rodney still walks around with the proverbial lump in his throat and never far from tears when he recounts the events of the morning of September 23.

“I’m still mesmerized, still surprised, and still trying to decipher and understand what happened that morning,” is the way he describes his current state of mind.

He had left work on 32nd Avenue in Lachine at 8:45 a.m. that Wednesday, heading home after a long and tiring night shift. It was exactly 9 a.m. when he took the first exit off the Decarie Expressway making his way towards the intersection with Pare Street. He remembered being five vehicles away from the red light when it turned green and traffic began inching forward slowly.

That’s when he noticed a man bolting out of a car on the passenger side, breaking free from the person who was trying to restrain him and running towards the protective railings over the highway.

Rodney says he doesn’t remember thinking much else after that.
But he moved quickly. Putting his truck in park, jumping out, and sprinting towards the guy who by that time was about to hurl himself on the highway below.

“I got there just in time to grab his t-shirt, which began to rip off his body… I grabbed his belt and his pants. By that time he was dangling over the highway and it felt as if I was going over with him. I screamed for help.”

Rodney says he remembered that several people had gathered but no one seemed ready to get involved.

“I think maybe one man tried to lend a hand.”

But it all seemed to be happening so quickly, Rodney says his focus was saving this person’s life and maybe his own, so he held on to the man, who wasn’t saying much of anything but doing all in his power to break free and end his life as they both dangled precariously over the speeding vehicles below.

“Without Mr. Rodney’s action, the victim would have tragically lost his life on September 23. Risking his life, Mr. Rodney accomplished an extraordinary feat….”

The minutes that followed were a blur, Rodney was overwhelmed. He wept uncontrollably for a long time.

He told the CONTACT that the realization of what had just happened seemed surreal.

“What I know for sure is that my actions were not mine, it was the Divine Father that was acting through me to save that man’s life. I felt as if I was ordained to be at that place, at that time.”

Inspector Jean-Nicolas Nault, head of Station 26, one of the biggest police station in Montreal covering, Cote des Neiges, Mont-Royal and Montreal saw Rodney’s act that day in another manner.

“Unlike so many others who were there that day, you made a decision to act… to do something,” he told Rodney at a short ceremony on Monday, November 16, at the station located on Mountain Sights avenue, before presenting him with an Award of Commendation.
Inspector Nault added that because of Rodney’s intervention, the man was given another opportunity to deal with whatever was troubling him in another manner.
“Because of what you did, that person was given a chance to find other solutions to his problems,” he told Rodney.
That same day, Rodney told the CONTACT that he spoke to the man whose life he saved, and told him of the award presented to him by the police department.
He says it was a very moving conversation.
“He said to me: “I wish I was the one giving you that award.”
“He also told me that he heard how much I cried that morning and how much he regretted what had happened, saying that he wished he could have taken back that morning.
I really felt his gratitude.”
Between the day of the incident and him receiving the award from the police, Rodney had not told too many people outside of his family circle, what had happened.
“It was just too emotional to talk about.”
He continues to look back at it as a seminal moment in his life.
“It tells you that there’s a Divine father guiding our every move. I’m convinced of that.”
Born in Jamaica, Rodney migrated to Canada in 1989 with his family. A natural go-getter, he’s an entrepreneur with a barbershop, Kustom Kuts on Decarie Boulevard, he also serves as a security guard at events around our community and across Montreal and he holds down a part-time job at night.
He’s married and the father of three children and grandfather of two.