Advertise with Us
Home News Unfinished business in Montreal North 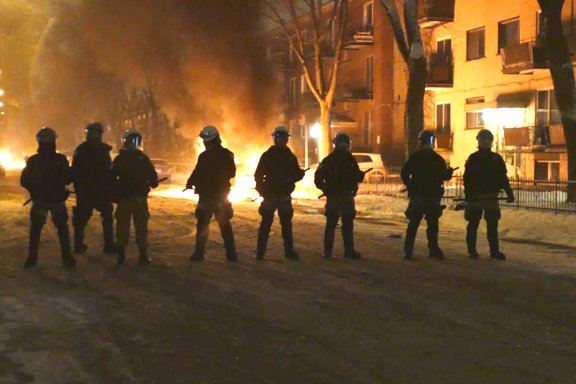 Following riots on the evening of Wednesday, April 5, which left several cars, businesses and a police station vandalized. There’s continued tension on the streets of Montreal North.
The riots were triggered by another police shooting of a resident of the area; 46-year-old Jean-Pierre Bony died in hospital a few days after he was shot by police during what they described as a raid on an apartment tagged as the headquarters of a drug ring.
Police say Bony was trying to evade arrest by jumping through a window and was shot by a rubber bullet. But his murder enflamed passion in a community already on edge with police, following the shooting of another resident in 2012, Fredy Villanueva, an unarmed teenager who was killed by police.
Villanueva would have turned 26 this month and protestors gathered on the streets in the early hours of the evening to mark his birthdate and to denounce the shooting of Bony.
After the protest ended peacefully at 9:00 PM, police say an estimated 60 people began setting fires and vandalizing vehicles and businesses.
Police officials say they strategically chose not to engage with protestors as a way to avoid escalating tension and individuals being injured.
But community leaders continue to be wary of what police and city officials do and say in Montreal North, saying that not much has been done to address the many recommendations that followed other police shootings.