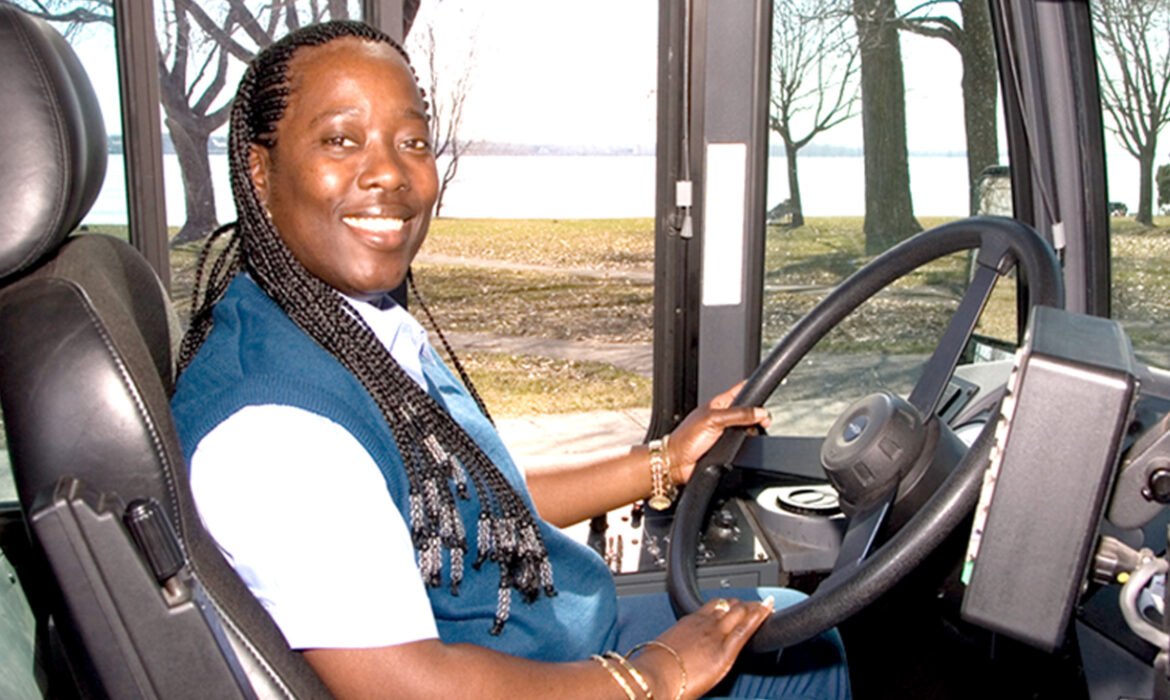 “Come on board. We’re waiting for you!”

These are the words of Karen Rice, who today, two decades after becoming what is believed to be the first English-speaking Black female bus driver in Montreal, continues to be a trailblazer for diversity, behind the wheel at the STM.
So those words can be construed as a call for others in the community to follow in her footstep.
Through her colorful journey of tenacity, triumph and of course, tribulation, the veteran bus driver understands what it means to create your own path to ensure you’re able to leave one behind for those who follow.
In 1998, Rice was a school bus driver and mother to two young daughters, when a friend casually mentioned a potential career with the STM, at the time known as the STCUM. While it was a career she never gave much thought to—her childhood aspirations were filled with dreams of driving a tractor, like the characters in her favorite television show—she eventually gave into curiosity, and ventured out for more information.
As fate would have it, the woman she met at the recruiting office that day would be the first person to “pay it forward.” After a few questions from Rice, she gifted her the study manuals and encouraged her to pursue a new dream.
According to the NDG resident, that would be easier said than done: In 1998, while there were few female bus drivers, none of them looked like her, and none definitely sounded like her. Rice is of Bajan heritage, and this is something that she has had to incessantly remind people of since her very first day.
In Montreal, she recalls that, “to see a Black face in my position, meant you were from Haiti or from any of the French speaking African countries.”
French was something that as a native Montrealer, Rice wasn’t fazed by. It had been a part of her schooling, and a language she spoke very well. But, as a Black face in a very white career field, she understood the assumptions that would be made about her.
These assumptions were often daily reminders to her that: “they saw the colour of my face before they saw the colour of my uniform.”
Rice remembers how difficult it was for her to maneuver through the “boys club” around her. Lunchtimes would be spent alone and on the occasion where co-workers would blatantly discriminate against her, no one would say a word.
But, if you know Rice, then you know that finding the words to speak up for herself has and will never be a problem.
Instead of giving attention to their folly, Rice set her sights elsewhere.
She became the “go to” for the people in her community who were able to see her presence as confirmation that they, too, could aspire to something new.
Whether along her route, or in her private messages, Rice began to mentor a new generation of bus drivers. By doing so, it was her way of paying it forward, like that lady had done for her, all those years ago.
These days, while she still encounters passengers who are surprised, and elated, to meet their first Black-female bus driver, she also finds joy in the young riders who stand close by, watching her every move, in awe and admiration.
She knows that, while labels are fine, the impact you leave on young minds is the best label there is.
While her story, and many just like hers, still deserve to be held in the same light as Jean-Baptiste Jean—the first Black bus driver that was honoured last month by the STM, during its Black History Month celebration—Rice will continue to lead by example, remaining firmly on track.