The task of a pharmacist and franchise owner 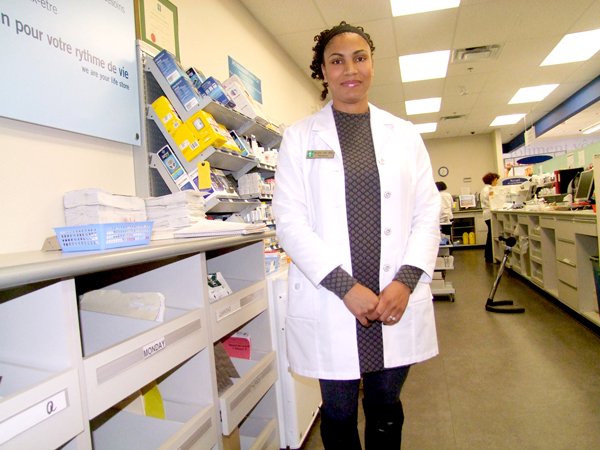 In the two years since Melissa Ross distinguished herself as one of the first Black women to own and operate a Pharmaprix franchise in Quebec, she has been working diligently building her clientele and setting a course for business success and professional satisfaction.
As a certified pharmacist, Ross’ number one priority is the wellbeing of her patients, something that is becoming increasingly hands-on with recent changes in government regulations on her profession. Changes, which she says are benefitting not only patients but also the health system as a whole.
“We are now able to serve in an even larger capacity, alleviating wait times in clinics, doctor’s offices and emergency rooms by exercising our new right to prescribe when the case permits.”
She says when Bill 41 became law in the province this past June, it opened the doors for pharmacists to perform certain duties that were previously restricted to doctors.
“Under certain circumstances, your pharmacist may now renew and adjust the dose of your chronic medications, prescribe treatments for certain minor conditions as well as laboratory tests and blood work.”
She says that although Quebec pharmacists have always been on the frontlines of the healthcare system as a visible and accessible source for healthcare information, the added responsibility means a significant evolution in her practice: “It means more personalized care and more time spent with my patients.”
And she sees the challenge that comes with her new status as a way to use her expertise to serve a wider range of people.
“I welcome and encourage anyone who is interested to book an appointment in order to discuss their pharmaceutical profile in-depth, and address all concerns in hopes of avoiding referral to a doctor.”
As challenging as they are, these are exciting times for the young pharmacist who recently became a first-time mother.
Ross says: “the welcomed addition of a baby to the family has presented another set of challenges, all too familiar to young professional women of my generation. We must learn to juggle motherhood and career using the organizational tools at our disposition and the art of delegation.”
As she enters ever phase of life and career, she brings a history of achievement and excellence.
She grew up in a house where entrepreneurship was encouraged. She was born in England to parents who are from Trinidad and Tobago.
From John Abbot College, she completed her undergraduate degree in Biology at McGill University then it was on to the Université de Montreal, where she acquired a Bachelor’s Pharmacy.
She secured her license in 2008.
After working with Pharmaprix in various capacities for about seven years, Ross acquired the franchise situated at 1 Westminister Street in Montreal West in June 2012.
These days, as she goes about her business building her enterprise and caring for her family, Ross is increasingly mindful of her role as a healthcare professional and her capacity to assist people when they are at their most vulnerable state.
And, amidst the overload of information now available on-line and elsewhere, she says it’s up to individuals to make proper choices when it comes to healthcare for themselves and their loved ones.
“More than ever, patients should be discerning in choosing their pharmacist. It is about selecting a knowledgeable professional who will offer personalized service.”
And she extends a special hand to our community, saying that she stands ready to bring her vast expertise in pharmaceutical services to assist in the well-being of those around her.