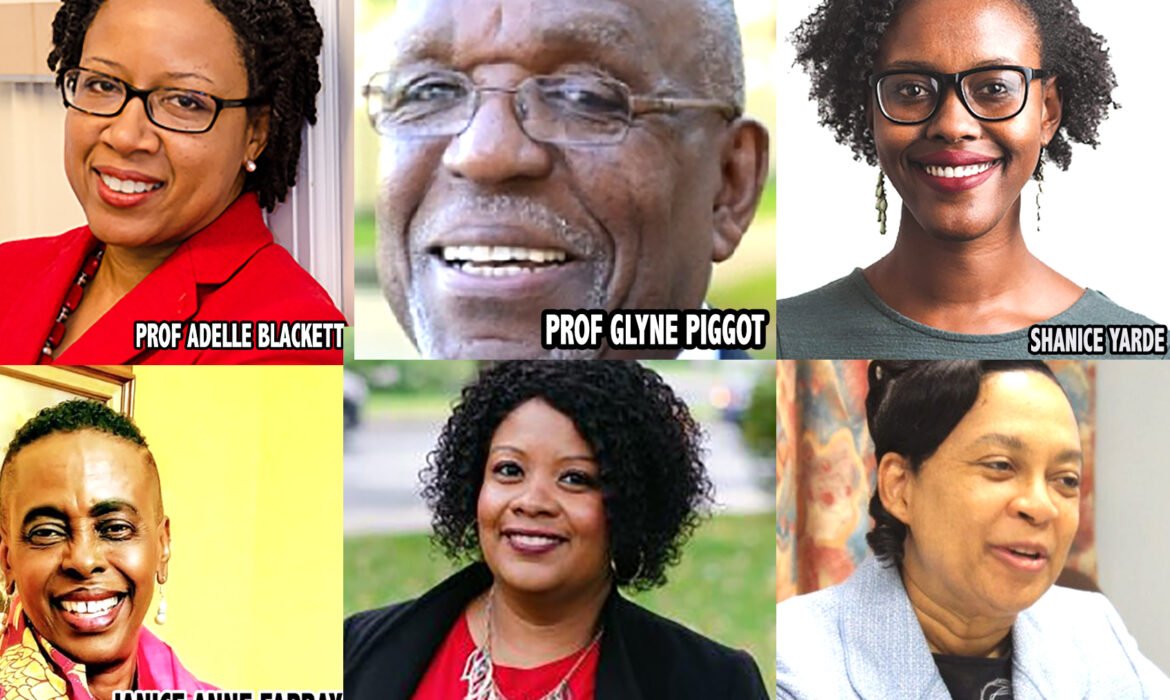 The recently formed Dr. Kenneth Melville McGill Black Faculty and Staff Caucus has been a long time in the making.
The first Black professor at McGill University was Quebec City born William Wright (1827-1908.) a
graduate out of the Faculty of Medicine who became the first Black medical doctor in British North America. He was chair of Pharmacology and Therapeutics from 1854 until his retirement in 1883.

When McGill law graduate Adelle Blackett became the first Black law professor at the university in March 2000, few realized she was also becoming only the second Canadian born, tenure-track professor to have been hired by
McGill.

The long history of Black professors and staff at
McGill, including entomologist Dr. Ernest Melville Duporte, from St. Kitts and Nevis, who spearheaded the establishment of the university’s Institute of Parasitology in 1932, has only slowly started to become broadly known, despite important research undertaken by historians and McGill graduates Dr. Leo W. Bertley, June Bertley, Dr. Dorothy Wills and David Austin, as well as University of Toronto education professor, Dr. rosalind hampton, all well known and respected in our community.
Emeritus Professor Glyne Piggott from Barbados is a leading linguist focused on Amerindian languages including Ojibwa, who carried out his 40-year career at McGill and served as associate dean of the Faculty of Arts before his retirement.
He recalled that in the 1970s and 1980s McGill recruited several Black professors, but most did not stay.

Anne Janice Farray, a respected McGill human resources specialist who has assumed leading administrative roles across the university over the past 40 years and supported many Black faculty and staff throughout their careers was recently recognized for her leadership.
Slowly, and informally, newly hired Black professors and staff have been meeting, sharing experiences and offering each other guidance and support.

Although few in number, Black professors and staff were assuming disproportionate responsibility for equity-related roles across campus, while also mentoring a wide range of students.

Community stalwart Dr. Anita Brown Johnson of the Faculty of Medicine and Health Sciences, Faculty of Dentistry and McGill University Health Centre, and Dr. Charmaine
Nelson, the first Black professor in Art History in all of Canada, were joined by Professor Nicole Ives in the School of Social Work and Professor Patricia Hewlin in the
Desautels Faculty of Management, both from the United States, followed more recently by Jamaican-born, returning-
Montrealer Professor Philip Howard in the Faculty of Education.
Dr. Myrna Lashley, honorary consul of Barbados, retired from a distinguished career at John Abbott
College and took up a position as Assistant Professor at McGill.

A catalyzing event for the Caucus was a Round-Table held in February 2018 at the Faculty of Law, entitled “Black Professors Speak: McGill Renaissance?”.
The event celebrated Professor Piggott’s contributions and provided an opportunity for Black colleagues to meet for the first time – including scholar of postcolonial francophone literature, Professor Mbaye Diouf, and food security expert, Professor Lawrence Goodridge, who subsequently left McGill to take up a chair at the University of Guelph.
To a capacity audience of students, staff and
faculty, participants at the Round-Table
courageously shared the challenges faced, the prevailing sense of isolation knowing that there were barely a handful of Black professors among the 1700 tenure track faculty members at McGill, and strategies not only to survive but thrive in academia.
One graduate student described the exchange as “soul-nurturing”.

Black professors and staff continued to support each other informally and year-round, while celebrating each others’ accomplishments.
Sporadic Black History Month events initially organized through the Social Equity and Diversity Education unit and subsequently falling under equity-education advisor and spoken-word poet Shanice Yarde’s inspired leadership became increasingly regular and focused on bringing leading scholars to McGill to enrich discussions on anti-Black racism and equity.
Similarly, Charlene Lewis-Sutherland, a senior advisor on Equity and Anti-Racism at Teaching and Learning Services,
organized the visit of the prolific feminist and anti-racist scholar, Professor Sarah Ahmed, to McGill.

Just before the pandemic, the Labour Law and Development Research Laboratory and the Faculty of Law hosted a symposium with the Centre for Research Action on Race Relations, Union United Church and the Black Students’ Network, commemorating the Supreme Court’s 1939 Christie v. York Corporation decision that entrenched racial segregation in Canada.
The event was widely attended by the community, including one of the newest Black professors at
McGill, historian Dr. Wendell Nii Laryea Adjetey. In her written remarks, Principal and Vice-Chancellor Suzanne Fortier underlined “the historic links” between the Montreal Black community and McGill.
Attendees applauded when the call was made for
McGill to launch a task force on slavery at McGill. The ground work for the emerging Caucus was laid.
In the midst of the pandemic that exposed inequities faced by Black communities, as the horror of George Floyd’s murder forced urgent discussions on slavery and its legacies, it became evident to faculty that a firm and united position was needed to call for McGill to redress anti-Black racism.

Inspired by the fact that in the 1930s, Dr. Kenneth
Melville – only the third Black professor at McGill – led the campaign at Union United Church in support of Fred Christie’s legal challenge to segregation, Black professors united to form the Dr. Kenneth Melville McGill Black Faculty Caucus.
The Caucus adopted a flat organizational structure, with
Professor Blackett serving as the founding convener through summer and fall 2020 until her academic sabbatical in 2021.
Principal Fortier responded, inviting the Caucus to a meeting to discuss previously articulated concerns. In a public statement issued on Emancipation Day, August 1, 2020, three core demands were set out: a task force on transatlantic slavery and colonialism; targets and timetables for the recruitment of Black faculty, students and staff, and accompanying support; and an office dedicated to anti-racism.
During the summer of 2020, there was heavy media
coverage of anti-Black racism and McGill, as Professor Nelson announced that she was leaving to take up a Canada Research Chair and found an Institute for the Study of Canadian Slavery at NSCAD in Halifax, while students were calling for the statue of James McGill, a slave owner, to be removed.

Principal Fortier moved quickly, vesting responsibility to develop a plan in the Provost’s Office, alongside the vice-principal (Administration and Finance). In contrast, several key universities across Canada entrusted the leadership of similar work to autonomous Black faculty, in some cases studying the history of slavery, and issuing recommendations.

The Caucus participated in discussions in good faith, while broadening its scope to welcome Black staff and course lecturers, including Adrienne Piggott, manager of Procurement Process and Governance, and now a member of McGill’s Board of Governors; Sara Pierre, a recent law graduate who holds a position on equity in the Provost’s Office; popular educator, changemaker and local media commentator Dr. Sabrina Jafralie and Kimani Daniel, a faculty lecturer at the Ingram School of Nursing.

The Caucus also coordinated meetings with Black student organizations and representatives of the McGill Black Alumni Association, as the plan was being adopted. There has been important movement in the action plan notably on hiring, while other key demands remain, as set out in the Caucus’s November 12, 2020 public statement. Moreover, meaningful and sustained consultation of the Caucus on the plan’s implementation remains a particular source of ongoing concern.

Professor Howard, alongside Professor Loydie Jerome Majewska from the Faculty of Medicine and Career Development Associate, Claudine Bordenave, have ably shared the role of convener during the winter and summer of 2021, while professors Blackett, Brown-Johnson and Piggott served as advisory committee members.
Also, several members of the Caucus have played a pivotal equity role on hiring committees across the university, and Professor Ives also co-founded Indigenous Access McGill.
Political Science professors Khalid Medani, Chair of the African Studies Program, and Debra Thompson, Canada Research Chair in Racial Inequalities in Democratic Society, currently co-chair a working group on Black Studies and African Studies that emerged from the action plan through student, faculty and staff calls for a more robust infrastructure for Black Studies at McGill.

Joy Bennett has brought her alumni-relations expertise to the service of the Caucus, and Professor Hewlin took up the critical responsibility of Ombudsperson for students.
Professor Adjetey is the Co-chair of the Social Sciences and Humanities Research Council’s new Advisory Committee to Address Anti-Black Racism. Professor Blackett, Canada Research Chair in Transnational Labour Law and Development, worked with senior university administrators across Canada to draft the Scarborough Charter on Anti-Black Racism and Black Inclusion in Canadian Higher
Education.

Dr. Brown-Johnson assumed the position of Chief of Family Medicine at the MUHC, has served in numerous equity capacities in the medical profession, and effectively represented the Caucus at a virtual event commemorating the legacy of the developer of modern blood banks, McGill graduate Dr. Charles R. Drew.
The work related to redressing anti-Black racism could become all-consuming, but Caucus members have been resolute about ensuring that the Caucus’s primary focus remains on autonomously and conscientiously nurturing and sustaining members – from three recent entry-level hires in social work from Fall 2020,
Professors Régine Debrosse, Alicia Boatswain-Kyte and Charles Gyan, to the long-standing professor of surgery at McGill’s Lady Davis Institute, Professor Fackson Mwale.
T

he Caucus’s mission statement captures this focus and is available along with the various public statements on the Caucus’s website, at http://blackfacultycaucus.mcgill.ca.
As newly recruited Black faculty and staff enter McGill in record numbers over the next few years, the Caucus looks forward to welcoming each, offering its solidarity and ongoing support, while cultivating a community that will emerge from, join and continue to serve broader Montreal Black communities and the society at large.