The bands are ready for Carifiesta 2017 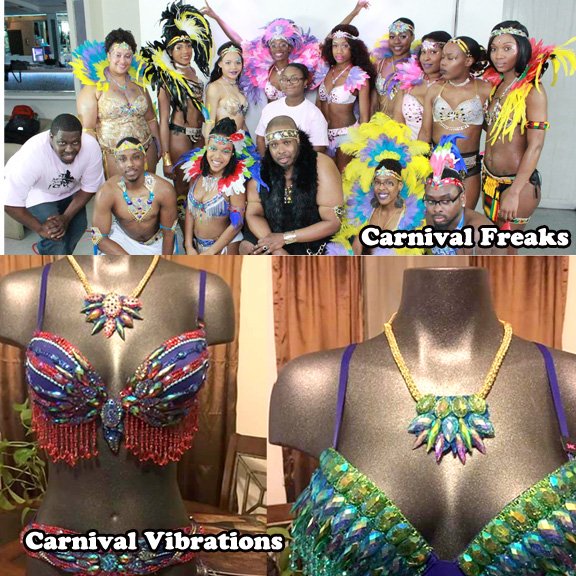 Summer is coming. And as the temperature rises it brings us a little closer to the many events that add color and flavor to Montreal. Carifiesta is one of them.
Those of you who have been reading my articles already know that I am not happy to see the decline of costume bands on the streets of Montreal during the Carifiesta parade.
It is my responsibility not only as a journalist, but also as a defender of my culture, to make sure costume bands do not become extinct during Montreal Carifiesta.
So let me shed light on the first two mas bands to launch their costumes to the public: Carnival Freaks and Montreal Carnival Vibrations.
Carnival Freaks, one of the most recent carnival mas bands on the scene, were the first to launch their costumes for Carifiesta 2017, on Friday, March 24. They will be portraying “COMING TO AMERICA” with five lovely sections that include:
* ROYALTY – The King & Queen in a Section (female & male) portrayed in yellow, blue and purple
* ROYAL WEDDING (female & male) in black, yellow and gold
* TRUE LOVE (female only) – pink and purple
* PETAL GIRLS (female only) – African print.
* Mc DOWELLS (female & male) 0red, blue, white and green. The section leader, Ms. Denise Als aka Dee Designs, designed all sections
Entrepreneur Ledon Anthony John and a team of mas lovers founded the band in 2011.
Email: Carnivalfreaksmas@gmail.com Instagram: @CarnivalFreaksMasBand
Contact & registration: Mr. Brandon Lalla-(514)-821-4522, Mr. Ledon Anthony G – (647)-821-4522, Ms. Denise Als-(647)-218-7790
Montreal Carnival Vibrations present AVATOR
Montreal Carnival Vibrations’ band launching will be held on Friday April 21, 2017 at Centre Eaton de Montréal, 705 Rue Sainte-Catherine O, Montréal, 6:30pm as part of Montreal Caribbean Fashion Week. The band was founded by Matthew Veloza and has been taking part in the Montreal Carifiesta parade since 2004.
Matthew acquired most of his costume making skills from his mother Ivone, who had been making costumes for the Carnival of Madeira while he was a teenager.
This year he and his team is portraying  “AVATOR” featuring three different sections.
Mystique Jungle Of AVATOR in green
Creatures Of Avatar in blue and red
Plants That Glow in the Dark in yellow, orange and red
Two sections are to be included from the Toronto Mas band “Fantazia International”
Contact & registration Information: President Matthew Veloza – 514-600-7168 or 24/7 hotline 438-488-0929, Email matthewsk84life@hotmail.com
Montreal Carifiesta takes place on Saturday, July 8 and the call is for everyone to support the costume bands.
Be free to send your feedback on any of my articles to Productionsounds@gmail.com or Instagram: @Productionjr