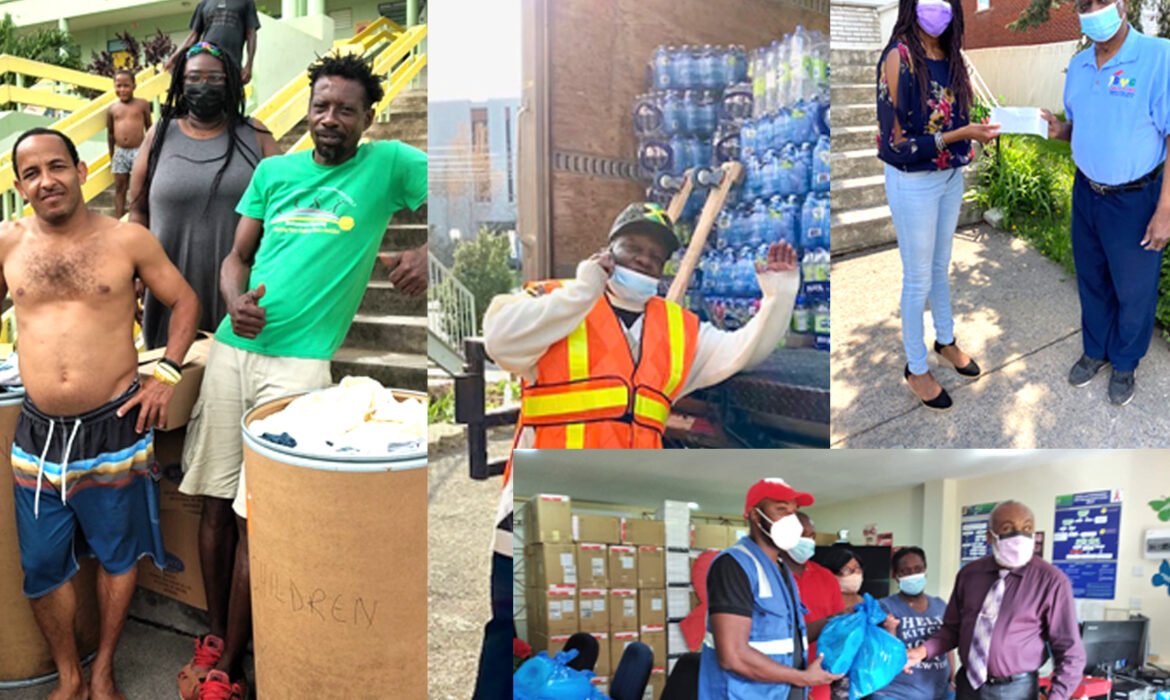 Once the call for help came from the people of St. Vincent and the Grenadines after the Soufriere Volcano devastated their island, Montrealers reacted with urgency and purpose.
On Saturday, April 17, members of the St. Vincent and Grenadines Association of Montreal along with volunteers and supporters mobilized at the St. Paul’s Anglican Church Hall in Cote des Neiges and collected tons of much-needed relief supplies to ship to the island.
A week or so later, after hours of back-breaking work under the limitations of the Covid-19 restrictions, the Montreal group was able to muster a 40-foot container jammed pack with dried and canned goods, toiletries, baby supplies, bales of clothes and at least a dozen palettes of water and had it on its way to the Caribbean.

Gratification for their efforts came in an email dated June 9 from La Toya Creese, procurement and administrative officer of the SVG Red Cross, expressing appreciation on behalf of her organization and hundreds of beneficiaries for the donations.
She listed the three shelters across SVG that received relief supplies from the barrels that were sorted at that time, including the Fair Hall Government School (Shelter), HIV Unit and Carrier Streams of Power Church (Shelter.)

Association president Jack Dear who led the relief effort says the note of appreciation from the SVG Red Cross means a lot to him, members of the association, volunteers as well as the hundreds of Montrealers who donated to the cause.
“It was a team effort that was made easier by the massive outpouring of support from the people of Montreal and surrounding areas. A big thank you goes out to all.”

These days, there is not a lot of news coming out of St. Vincent News on the conditions of the thousands of displaced Vincentians or the rebuilding efforts following the Soufriere Volcano eruptions in April on the island.
However, what we’re hearing is that following the 30 or so major eruptions that took place between April 9-22, the alert level in the country has moved from Red (ongoing eruption) to Orange (24 hours stand-by notice). The latest downgrade came during the first week of May.
Close to 20,000 people were displaced by the volcanic activities, many ending up in shelters around the island and some having to be evacuated to surrounding islands like Barbados and St. Lucia.

As of the beginning of June, thousands were still holed up in shelters unable to return to homes that are covered with volcanic ash and are expected to takes months to clean and restore.
Reports say that agriculture and livestock have been almost wiped out from most of the northern sector of the island where the volcano is located, heaping additional layers of distress on the people of SVG.

While Vincentians in the Diaspora as well as governments, NGOs and people around the world have extended their hands in support with hundreds of thousands of dollars and relief supplies, the need is still at a critical level in order to get the island back up and running.
In early April the United Nation launch a $29 million funding appeal to assist in some of the short-term demands such as water, sanitation and hygiene, shelter and nutrition as well as the restoration of infrastructure.