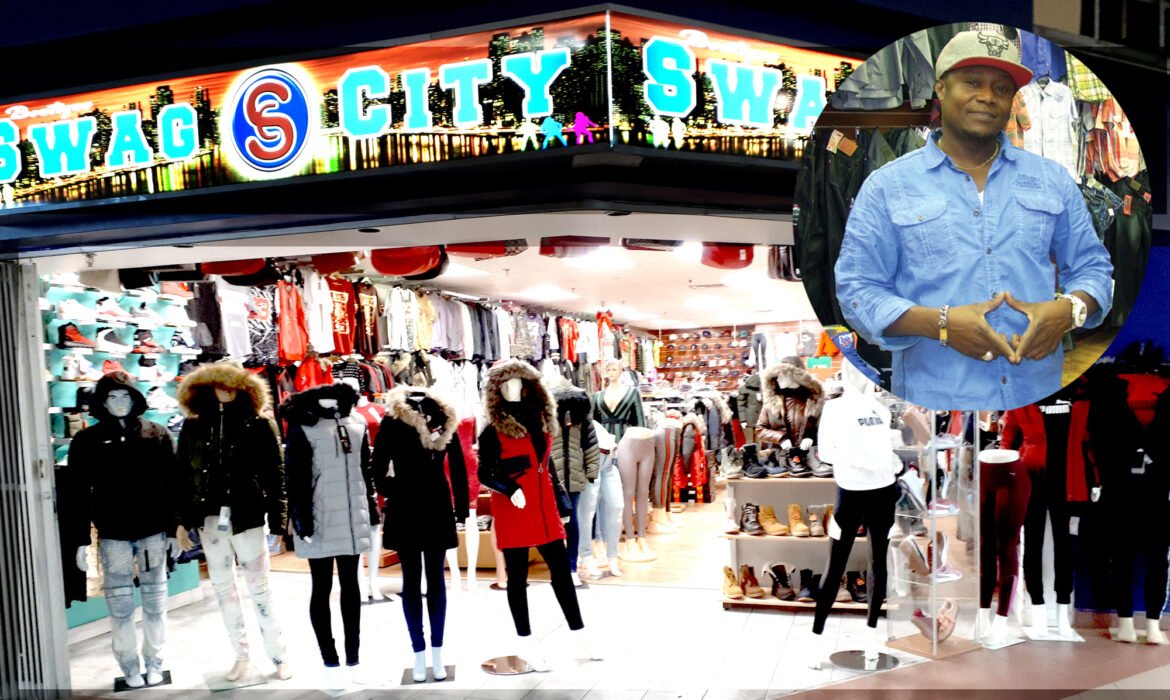 “The reason why it’s important for me to tell my story around this time of the year, is for others in the community to know that they too have (the potential) to make it happen if they believe in themselves and are ready to work hard for what they want.”

The story of Swag City, the little store that could, and its parent company JAH=ONE, tells of the struggles and the perseverance of a young Montrealer who believed in walking the path of self-employment.
And from Day One, Moses Martin, known across the community as Gedian Fyah, knew that nothing was going to get him off track, as he moved around the city with his bag of goods on his back, selling to those he met on the street and at events and festivals around Montreal and beyond.
“There are many roads to take to achieve your dream in life… but this is the one I chose,” says the intrepid entrepreneur, who also hawked his tee-shirts, polos and hats carrying the JAH=ONE logo to every major community event, including Jamaica Day, Trini Day in The Park and The Reggae Festival, and at those big indoor reggae shows.
Gedian’s rootsy marketing approach was obviously an early success because before long the line started to win favor among the young and fashionable set in the city and eventually became an item for many of the international reggae stars who passed through the city. Big names such as Kymani Marley, son of Bob Marley, Luciano, Beenie Man and Beres Hammond all wore the Jah=One label on stage in Montreal.
“Without the start-up money to make it happen, it was not an easy road to start a clothing line,” he told the CONTACT. “So I did it the only way I know, which is what I call ’street hustling’.”
A consummate entrepreneur, he made Montreal his marketplace, moving easily from hawking on the street to setting up a small outlet at an upstairs location on Victoria Street he called Jah=One.
He then expanded it into one of the city’s biggest casual wear stores, between Cote St. Catherine and Bourret.
Then about six years ago, Gedian decided that the time was right for him to take it to the next level, so he approached the owners of the Cote des Neiges Mall, telling them that his store was a perfect fit for their mall.
They visited his place on Victoria and checked him out and agreed with his proposal.
That was the beginning of Swag City, which he established on the ground floor of the mall.
Gedian says it was an absolutely good move for his business, but true to his nature he continued to look upwards and after four years at that location, he approached the Mall owners asking them for a spot on the top floor.
Those familiar with Gedian know how difficult it is to say no to him.
It’s been two years since Swag City has been occupying the Mall’s prime location as you enter from Cote Des Neiges Road.
His is a spectacularly attractive store carrying the latest gear for those who are in search of the latest styles. It’s hip. It’s bright. And it’s welcoming.
I know it’s one of the best locations in the mall and for that I’m very thankful to the management team, Mr. Webber, Mr. Pollak and
Mr. Abie for recognizing the potential of SWAG CITY store.
I’m also thankful for the mall’s security team for their professionalism and hard work making it a great environment for us store owners to do business.
“The reason why it’s important for me to tell my story around this time of the year, is for others in the community to know that they too have (the potential) to make it happen if they believe in themselves and are ready to work for what they want.”
Normally upbeat and ebullient, Gedian becomes emotional when he talks about detractors he has met along the way:
“I remember a Rasta man meeting me and saying to me ‘why don’t you go and look for real work and stop pimping the people and the street?’”
I said to him it’s like he’s blind “if he cannot see that what I’m doing is real work.”
I had to ask him: “Don’t you see is sell me a sell man, I’m not going to rob and thief.”
He says today Swag City is well on its way to meeting his expectations of serving a wider market with his customers comprising different cultures, different races and of all ages, and he appreciates them all.
And he continues to broaden the range of line of accessories with the addition of the RANCH brand shoulder bags as well as the Swag City waterproof back-packs that are available with the extensive line-up of casual wear: shoes and boots, coats, winter jackets and everything else for the hip set.
And as it is every end of year, Gedian promises a 20% discount to all his customers until the end of the Holiday season.
He also has a good word for Montrealers: “I’m wishing a Happy Holiday Season and The Best Of Health, Strength and Great Success for 2019 and beyond to all.”
Find Swag City at Plaza COTE DES NEIGES Store # 202A-B, 6700 Cote des Neiges Rd., Montreal H3S 2B2 514-735-5782.