Advertise with Us
Home News Community News Shoulders To Stand On

Shoulders To Stand On 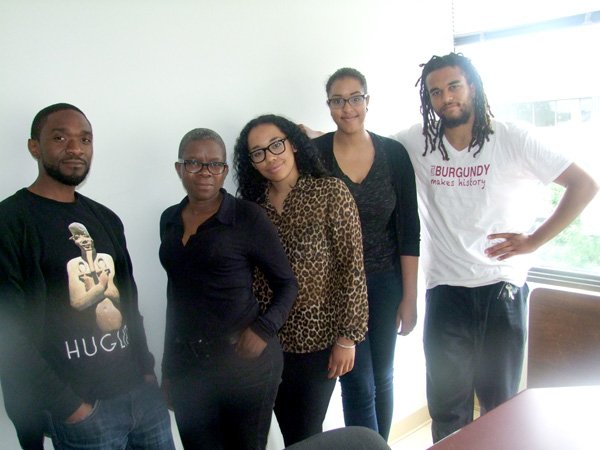 So much of the history of Blacks in Quebec is rooted in Little Burgundy, an area nestled on the south western edge of downtown Montreal where contingencies of African Americans, Black Nova Scotians and a scattering of West Indians planted themselves at the turn of the century, determined to grow families and build a community.
No one told them that it was ‘gonna’ be easy, and it wasn’t. But they persevered, and in so doing laid a foundation by putting down markers that helped to illuminate the way for generations of Blacks who followed.
However, over time those markers have become lost in the overgrowth of socio-economic and demographic changes that have been transforming Little Burgundy and the community over the past six to seven decades.
At times, it seems as if all traces of the Black presence in the area, if not the entire province of Quebec, have been lost in the overgrowth.
Now it’s in the hands of about 20 Black youth to try to retrace the steps of earlier generations and uncover some of the marks they have made to the political, social and cultural landscape of the city and province.
Over the past few weeks, the young men and women, many in their teens, have been participating in an aptly titled project, Standing on Their Shoulders (STS), and are busy learning about some of the institutions that were established in Little Burgundy and the individuals who built and influenced them.
It’s billed as a “unique project to capture, share, teach and interpret the heritage of the Black English-speaking community of Little Burgundy. What they gather they will package in video presentations, two to three minutes long, that are intended to serve as the first draft of a history that has long been stifled.
According to Kai Thomas, the researcher attached to STS, there’re a lot of stories to be told about the Black presence in Burgundy. A strong point of this project is “that every story told by the young participants will be delivered in their own voices and they will keep it real.”
“They are today’s griots and as such, even the stories that are common knowledge will be told in a way not heard before.”
“It’s incredible how much of our history and the history of Little Burgundy they have unearthed so far,” says Jennifer Sinclair, one of the animators of the project. “For us it’s so important to know where we are coming from in order to know the way forward.”
Pharaoh Freeman is also an animator and he is excited by the interest that the young participants bring to the project and their enthusiasm to construct the stories. “It shows that in the right circumstances our youth care a lot about history and that means there is hope for the future.”
“What they are doing can serve as a foundation for other young people to build on,” says Tenisha Valiant, the project’s outreach director. “So there’s the possibility of continuity, and that’s just as important.”
After months of preparation and research, Thomas says all the participants have decided on their topic and are in the final phase before rendering the stories to videos.
The technical part, the filming and editing, will be done by Great Things Studios, owned by three young community members, themselves originally out of Little Burgundy, but who are now doing business out of nearby St. Henri.
Thomas said the studio is bringing their expertise to bear on the project but  the young participants have been provided with extensive training in  all the technical aspects of video recording production and will be fully  involved in the entire operation.
Sharon Eddy, the program coordinator, who says throughout her years in elementary and high school in Montreal heard very little about the Black presence in Little Burgundy or anywhere else in the province for that matter, says the project will be an historical eye-opener for many as it is for her.
And she says it’s garnering widespread support  from community groups and individuals.
Among those providing valuable information and resources to the young participants are: Erene Anthony, Ethel and Suzanne Bruneau, Skipper Dean, Ivan Livingstone, Anna Rockhead, Wayne Thomas,Don Jordan, Phyllis Lewis, Norman Marshall Villeneuve and Louise Villeneuve, Sacha Obas, Robert Galbraith, Ralph Whims, Leon Llewelyn and Judge Juanita Westmoreland
And among the organizations offering support are: Youth in Motion/ Club Energy, Black History Month Round Table, Desta Black Youth Network, Tyndale St-Georges ACCAF (Aspire Canadian Cultural Alliance & Foundation), NDG YMCA, Colored Women’s Club, B.U.M.P. (Burgundy Urban Mediation Project), Concordia University, Centre for  Ethnographic Research and Exhibition in the Aftermath of Violence, Little Burgundy Coalitionand James Lyng High School .
The video presentations will be unveiled at Montreal City Hall next February as part of Black History Month celebration
Like  STS on Facebook Standing on Their Shoulders or reach them at stsproject2016@gmail.com514-342-2247or s.