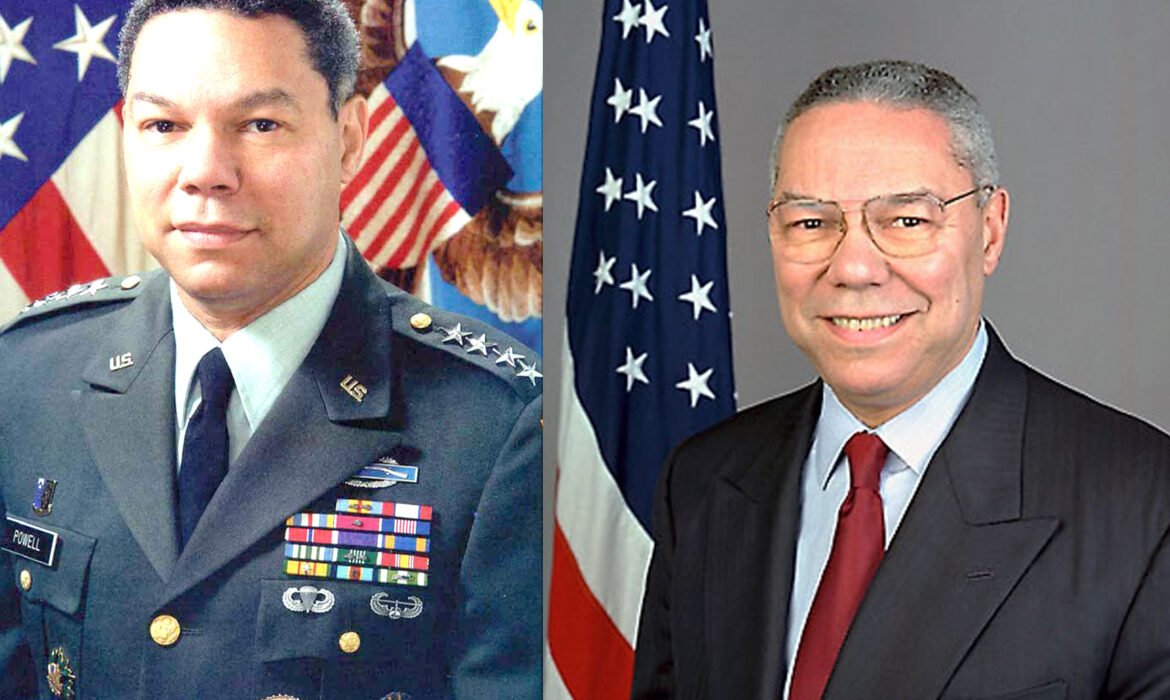 On the morning of Monday October 18, the world received news of the passing of General Colin Powell.
His family made the announcement via Facebook that Powell who was the first Black person to serve as Chairman of The Joint Chiefs of Staff and Secretary Of State of the United States died of Covid-19 complications. He was 84.
Born Colin Luther Powell on April 5, 1937 in Harlem, New York to Jamaican parents, the distinguished war hero cum statesman was beloved by many on both sides of the political fence.
An admitted poor student who grew up in The Bronx, New York, he earned a Bachelor of Science Degree in geology at City College Of New York.

While there, he attended Reserve Officers’ Training Corp (ROTC), an experience he described as life-changing and finally “finding something that he was good at.”
As part of the ROTC Powell joined The Pershing Rifles, a fraternal organization started by U.S. General John Pershing, who served in the first World War.
Powell joined the U.S. Army upon graduation completing his basic training in Georgia where he faced extreme racial discrimination as a Black officer in training.
He completed two tours of service in the Viet Nam War serving initially as an advisor to the South Vietnamese Army until he stepped on a booby trap which led to a serious injury to his foot and brought an end to his first tour in 1962.
Powell returned to Vietnam in 1968 as a major and served as assistant chief of staff of operations for the 23rd American Infantry Division.
He would be decorated with the Soldier’s Medal for bravery after rescuing several American soldiers (including a Major General who was a division commander) from the wreckage of a burning crashed helicopter.
In later years, speaking about his experience in the Vietnam War, he described the leadership as lacking and weak and also repudiated the My Lai Massacre in which U.S. troops were accused of mass murder of unarmed South Vietnamese civilians in a 1968 incident.
However, decades later when he was assigned to investigate the matter, he appeared to downplay the event.
After returning from Vietnam in 1971, he attended Georgetown University earning a Master of Business Administration.
Powell served a White House Fellowship under President Richard Nixon from 1972 to 1973, a program and an affirmative action initiative put in place by President Lyndon B. Johnson in 1964.
He continued to serve in the military as a lieutenant-colonel and later as a senior military assistant to Secretary of State Casper Weinberger.

He was involved in the 1983 invasion of Grenada and the 1986 airstrike on Libya. In 1987, he became the US Security Advisor under Frank Carlucci and the later replaced Carlucci under President Ronald Reagan.
It was during this time that he negotiated key arms treaties with President Mikail Gorbachev of Soviet Union.
In 1989, President H.W. Bush promoted Powell to a Four-Star General and Commander In Chief of US Forces in the continental United States including Alaska, Hawaii and Puerto Rico.
Later that year he was appointed Chairman of The Joint Chiefs of Staff, the highest military position in the U.S. becoming the first African-American to serve in that capacity.
Powell led several major political and military conflicts around the world including Persian Gulf War in 1991, “Operation Desert Storm,” as well as the 1989 invasion of Panama, ousting and arresting President Manuel Noriega.
As head of the armed forces, Powell favoured diplomacy and containment over military action that came with massive casualties.

It was the basis for what became known as the Powell Doctrine: which limits American military action unless it satisfies criteria regarding American national security interests, overwhelming force, and widespread public support.[2]
In an era where were coming into His views usually brought him in conflict with politicians and government officials whose “hawkish” approach favored another path to US global dominance.
Powell resigned in 1993 ending 35 years as a professional soldier..
His stellar military profile contributed to him being seen as a likely candidate to become the first Black president of the United Sates and was touted as a possible opponent of then President Bill Clinton in the 1996 elections.
He represented a new face for the Republicans who reputation has been much maligned following the Watergate scandal of the 1970’s and the failed economic policies of Reagan’s administration in the 80’s.
Powell cited his lack of passion for politics in general as his reasons for not seeking the highest office in the land.
In 1997, Powell started “America’s Promise”, the country’s largest non-profit organization aimed at helping children from all socio-economic backgrounds who are most at risk.
He also launched The Colin L. Powell Center For Leadership And Service, aimed at mobilizing youth for leadership roles whose socio-cultural backgrounds were most underserved in the country.
Although well meaning, these endeavors eroded a lot of Powell’s support amongst the GOP. At the 1996 National Republican Convention in San Diego, , some booed when he spoke about his support and the importance of affirmative action, a policy he claimed was responsible for all his success.
And the boos continued during his speech as he supported the right for woman to decide on the topic of the abortion issue.
When George W. Bush was elected the country’s 43rd President, he appointed Powell as the first Black Secretary of State. The position put him in 4th in command to the presidency and allowed him to decide most of the country’s foreign policies.
The low point in his career in public office was his role in building the case for the 2003 invasion of Iraq following the 9-11 attacks.

Powell would later apologize for false information that he acquired about Iraq possessing weapons of mass destruction (WMDs). The invasion of Iraq lasted five weeks and cause almost 50,000 causalities. Powell claimed in an interview with Charlie Rose in 2004 that he had only four days to review data that he had received on WMD’s in Iraq.
The U.S.-led occupation of Iraq after the war would last until 2011 with a cost of US2 trillion.
In 2005, Powell told Barbara Walters that his role in the invasion of Iraq was a “blot” on his record and said: “It will always be a part of my record. It was painful. It’s (still)painful now”.
In 2005, Powell retired as Secretary of State and returned to private life with his wife Alma whom he had been married to since 1962.

A lifelong Republican, he publicly supported Democrat Barack Obama’s bid for the presidency in 2008, when Obama would defeat John McCain to become the country’s first African-American president.
He also supported President Obama when he was re-elected in 2012 when he ran against Mitt Romney.
Following the creation of the controversial Tea Party movement within the Republican Party and the divisive policies of President Donald Trump, Powell announced this year that he longer considered himself a Republican following the deadly insurrection at the US Capitol.
Powell, true to his Caribbean roots (the son of Jamaican immigrants) never strayed far in his love of music.

In a 1998 report, the New York Times captured it: Although Powell (…) was a model Episcopalian acolyte during his boyhood in the Bronx, he’s no choirboy. The reserved military man is a serious calypso fan, and his favorite artist is the Mighty Sparrow, a legendary singer who is known as ‘’the master of the naughty phrase.’’
In fact, after being serenaded by the Mighty Sparrow at a private function in March 1998, Powell was quoted saying: ‘’Of all the honors I’ve received, this is the best.’’
Recently Powell, who had been double-vaccinated against Covid 19, was being treated for multiple myeloma, a cancer of the plasma cells that suppresses the body’s immune response.
Those who are vaccinated against Covid 19 are still at risk when immune-compromised.
Gen. Powell leaves behind his wife Alma of almost 60 years, three children and two grand-children.