Meet 11-year-old Elizabeth Bell: A powerhouse on the baseball pitch 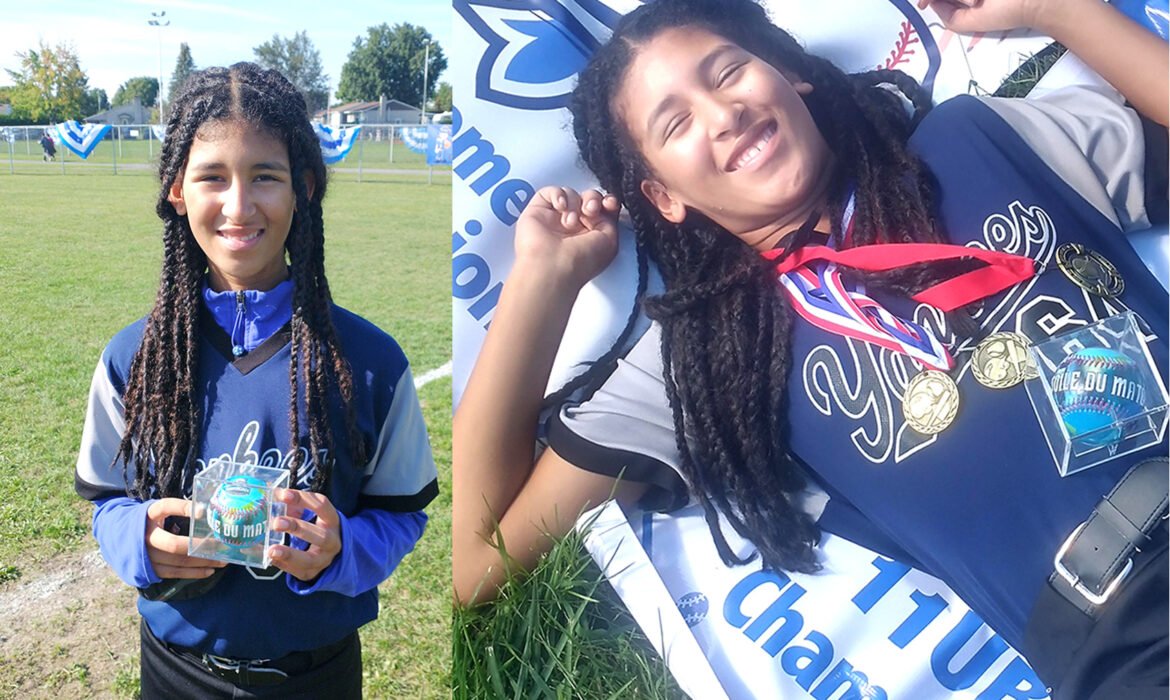 When Jackie Robison broke the color barrier in baseball, he could not have imagined the ripple effect he created.
And now decades later, 11-year-old Elizabeth Bell, a Grade 7 student at Kingsdale Academy is making inroads for herself in the sport as one of the few young Black and female players in the region.
This past season she led her Pierrefonds Yankees baseball team to the Lac St-Louis Regional championship with her bat as well as her prowess on the mound.
She struck out 10 batters (out of a possible 14) in the 4.2 innings she pitched in the Gold medal game against the St Lazare Mustangs Noir, in addition to hitting an inside the park homerun leading her team to victory.
The champion together with her father former player Robert Bell spoke to the CONTACT via phone about Elizabeth’s (or Leemer’s as she is commonly referred to) exploits so far.
One thing is clear, she loves the game.
“I’ve played baseball my entire life, father is my coach,” says the 11-year-old who stands at an incredible 5’9” tall.
Her father Robert Bell and her grandfather were also baseballers.

Elizabeth is an outlier in women’s baseball as it has been long held as the male bastion especially in Quebec. In addition to playing for the Pierrefonds teams she was also on the St. Louis Girls Cardinals team.
At the local level Elizabeth competes with boys and easily holds her own. She says she enjoys the comradery and the team-spirit that are a part of those mixed teams.
Her dad recognizes it also.
“I’m hoping that they get to keep the girls playing with the boys. I know that there’s like a (tendency) of wanting to separate them, but I really think that if the girls want to play with the boys they should,” Mr. Bell says.
Whatever happens, Elizabeth has no intentions of putting down her bat any time soon, as with the competitive landscape changing and squads like Team Quebec and other regional teams as well as semi-professional and professional leagues, there’s room for Elizabeth to keep playing for as long as she chooses to.
Furthermore, the young Montrealer is looking forward to continuing to improve her game all levels if only to show other young girls that with dedication and hard work you can do incredible things on and off the field.