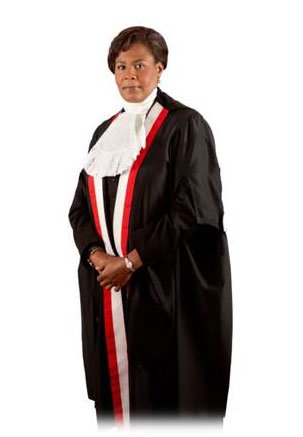 History was made in Trinidad and Tobago when on Friday, February 1 it named Paula-Mae Weekes to be its sixth president and the first woman to hold the position.
Weekes, who earned the distinction as a well-respected jurist for well over two decades, will replace Anthony Carmona, who demits the office of the presidency in March.
She served as a judge of the High Court and in the Court of Appeal of Trinidad and Tobago between 1996 and 2016 before she retired in 2016. Then in February 2017, she was sworn in for a three-year term as a judge of the Turks and Caicos Islands Court of Appeal.
Weekes was nominated without opposition as the singular choice of both the ruling People’s national Movement and the Opposition United National Congress.
Both the prime minister and the opposition leader recognized the symbolism of her appointment.
PM Dr. Keith Rowley was quoted as saying that: “Madam Justice Paula Mae Weekes is eminently suited to carry out these duties, to bring calm and confidence to our national governance and to demonstrate that necessary ingredient of good judgment, which is the unscripted recipe for a successful undertaking of this solemn assignment.”
Opposition Leader Kamla Persad-Bissessar was also quoted saying that she was certain that Weekes’ election, as T&T’s first female president “will serve to inspire our girls and women Today, our girls can find examples of women at the highest levels of our nation’s political sphere, and that is something of which we can immensely proud.”
Persad-Bissessar also made history serving as the country’s first female Attorney General and Prime Minister.
Weekes, a former Bishop Anstey High School student, earned her LLB at the University of the West Indies, Cave Hill campus and a Legal Education Certificate from the Hugh Wooding Law School.