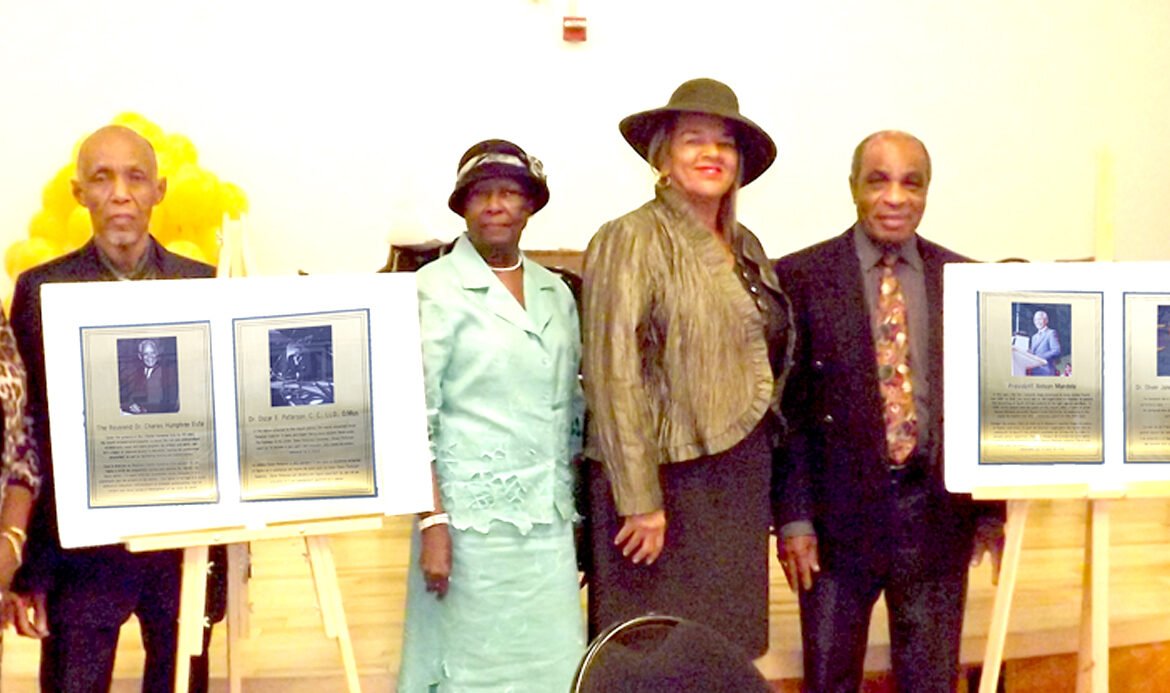 If you’re in the Little Burgundy neighborhood and happen to stroll by Union United Church at Delisle Street and Atwater, you will notice the new sets of plaques adorning the exterior of the building. They are monuments of the long and rich heritage of the church.
The building, which was built in 1899, has been home to the congregation since 1916.
The plaques shine a spotlight on four men, who over the course of the history of the church have helped to empower its congregation and impact the lives of Montrealers and beyond.
The Reverend Dr. Charles Humphrey Este, Dr. Oscar Peterson, President Nelson Mandela and Dr. Oliver Jones have all been over-powering in the way they have impacted the lives of those around them and share a common bond by having brought their message of hope and fulfillment to the congregation of Union United.
Each one has his photo and a brief biographical sketch engraved on a 12×14 plate installed on the outside walls as a lasting memory of their influence.
For 45 years Dr. Este served as the spiritual leader of the flock at Union United with his outreach work extending throughout the community, helping Montrealers and newcomers in areas of employment, housing and immigration and other social issues.
The lives of Dr. Peterson and his family reach deep into the history of the church as he once lived in the building that later served as the manse. They were lifelong members.
Under the tutelage of his sister, iconic music teacher Dr. Daisy Sweeny, Peterson emerged as Canada’s leading and world-renowned Jazz pianist.
Mandela visited Union United shortly after his release from a South African jail, where he spent 27 years as a political prisoner. His visit to Montreal and the church, where he delivered a landmark address, brought out thousands of Montrealers.
And Jones represents a long and unbroken bond between the church and the Little Burgundy community where he was born and raised.
The outstanding pianist played his first gig on stage at Union United when he was five-years-old, then went to national and international acclaim. He remains a much-valued member of the church today.
The plaques are part of the Union United Walking Tour, a soon-to-be launched initiative that will offer Montrealers and visitors to the city insights on the history of the church and the neighborhood out of which the Black community was spawned.
Ms. Erene Anthony, a past chairperson of Union’s board of directors has been the driving force behind the initiative.
She says the Walking Tour stop at the church is meant to tell visitors of the significant contributions that Blacks have made to the city while reminding them of Rev. Dr. Este’s invaluable service to the community and the impact of Oscar Peterson, Dr. Jones and Nelson Mandela on the people of Montreal and the congregation at Union United Church.
“Most importantly, the idea is to preserve our history for our future generations.”
Chris Jordan, who is chair of the church’s Heritage Committee, says the Tour will heighten the profile of the church and open a window on its rich history and that of Little Burgundy.
“Union is the vanguard of Black churches in Quebec and it is important that people know our history,” he told the CONTACT. “It’s also important for us to set a benchmark for future generations as they continue the journey that was started more than a hundred years ago [at this church.]”
The Walking Tour is expected to be launched in the Spring and will allow visitors to see a combination of interesting items, most of which were strategically compiled by Ms Nancy McKenzie who has come to be seen as the resident church historian.
Among those items are
•    The pulpit from which Nelson Mandela addressed an overflowing crowd of Montrealers
•    A Plaque listing the names of Black veterans who served in World War 11
•    The Nelson Mandela Boardroom displaying heritage photos of the outreach work of this community for the past 110 years
•    Plaque of Remembrance in the Narthex listing the names of the 12 Sunday School children who drowned on a day camp outing in 1954
•    Quilt in the sanctuary that tells the story of slaves making their way from the United States to Canada through the Underground Railroad.
There will also be a variety of souvenirs and displays for visitors to peruse, including commemorative cups and plates representing various milestones in the church’s history.
There will also be cards of the Underground Railroad quilt, DVDs of “One Hundred Years of Faith Documentary” by Anthony Sherwood and the 100th Anniversary Book “Proud Past – Bright Future” by Maranda Moses, and photo albums of the church’s events and outreach work.
Information on Union United Church at http://www.unionunitedchurchmtl.ca/index.htm