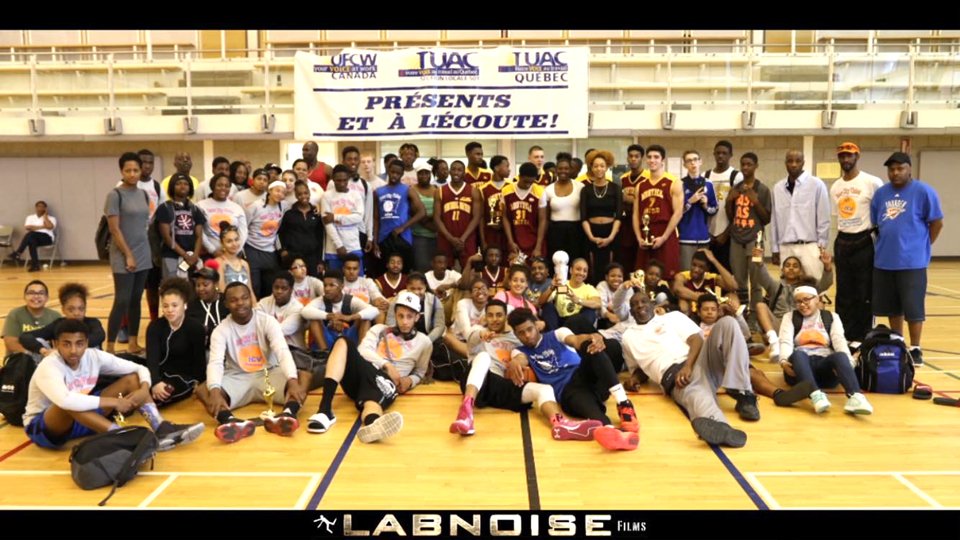 Hugh Scarlett and Charles Boyce grew up in Montreal at a time when Black kids had a lot of activities to occupy their time, but central to it all was the time they spent on the basketball court.
“Some of us were playing ball seven days a week,” says Scarlett who represented a number of semi-professional teams around the city. And it reflected in the quality of basketballers that were coming out of this part of the city.”
He was referring to NDG, Little Burgundy and other areas in the western end of Montreal, which for many years was a hub for ball players from across the city and beyond, and a training ground for local legends such as Trevor Williams, Dwight Walton, Wayne Yearwood, Dean Smith, Pascal Jobin, Pascal Fleury, Charles Rochelin, and of course Hugh Scarlett himself.
Boyce was a long-standing member of the NDG-BCA and talked about growing up in an environment when they, the younger ones, were able to benefit from what the community had to offer back then.
“I think it’s safe to say that basketball was a big part of what brought us together and helped us as we grew. It’s the same thing we’re trying to do today.”
Scarlett zeroed in on a big reason for their success back in the day.
“The one reason we were able to make basketball such a popular sport in Montreal and cultivate such quality players was because we had access to a gym seven days a week,” he remembers.
Those were the days when the spot known as the “Rec,” which was the NDG Recreational Centre operated by the City of Montreal, was jam-packed with ballers almost every night and pitted the best of the best against each other.
Those days Scarlett and others such as Roger McDonald and Boyce were active in the NDG-Black Community Association and at the forefront of organizing tournaments that brought thousands of top ball players from across North America and their fans to Montreal.
Then just like that the BCA was forced to shut its doors, and with that the ball-players lost access to the rec. The impact of that closing was on the community, more so by those who saw basketball as a path to personal enrichment for the youth and to community development.
Out of that disappointment Scarlett, Boyce and other die-hards banded together and formed Montreal United as a vehicle to assist up-and-coming basketballers up their games and travel across Canada and the United States participating in tournaments.
Over the past couple years, travelling most of the times with about 30 young adults, boys and girls between the ages of 13 and 18 and some of their parents. They have been to Boston, Toronto, Philadelphia and Brooklyn, New York, where they visit every year.
Scarlett says to make the trips happen he and his team of organizers embarked on an extensive fundraising drive, calling repeatedly on their supporters and benefactors to help fashion life-enriching experiences for young Montrealers of all cultural backgrounds.
Montreal United also stages a tournament at least once every year, hosting about 18 teams from here, Toronto, and the US, doing their part to keep the game alive for the many enthusiasts in the English speaking sector of the community.
Both Scarlett and Boyce agree that their task of highlighting basketball is made so much more difficult because they don’t have regular access to a gym in the area.
They say the ultimate gift that the City of Montreal can offer them and the throng of kids that they’re trying to keep on the straight and narrow with basketball throughout the year is regular access to a gym in the NDG/Cote des Neiges area.
Even as they continue to reach out to city officials, Scarlett and his team at Montreal United have mega plans for the future that include taking a group of young ball-players to different Caribbean islands over the next few years.
“It’s long overdue,” Scarlett says. Too many of them don’t have a clue about the islands where their parents or grandparents are from. We want to change that by organizing these trips that will be like an adventure for them, and educational also.”
They are hoping to get to Jamaica in 2018.
On the weekend of May 19-21, Montreal United will host its annual Invitational Basketball Tournament with various divisions for boys and girls and for men of all ages.
And because the emphasis is on mentoring and helping youth to develop, the call goes out to Montrealers to help.
Info. 514-594-3128 or montreal.united@live.ca