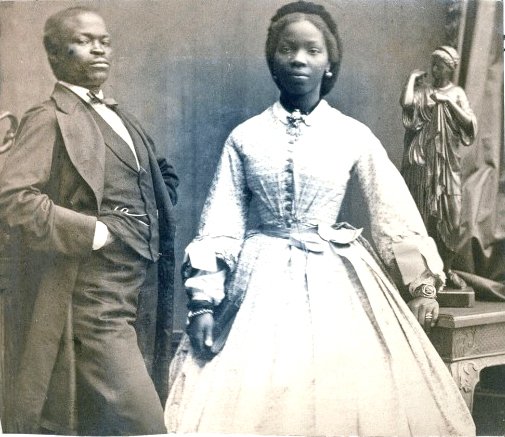 Born an Egbado princess of the Yoruba people

She was born in 1843 of Royal blood, an Egbado princess of the Yoruba people of Southwest Nigeria.
In 1847, when she was a 4-year-old, her whole world as she knew it was shattered by raiders sent by King Gezo of Dahomey, the notorious slave-trading monarch. Her parents were murdered and she never saw any of her siblings again.
About four years later Commander Frederick E. Forbes of the British Navy arrived in Dahomey aboard the HMS Bonetta. One of the tasks that he had been given by the British Government was to persuade King Gezo to end the slave trade.
During his yearlong stay there, he met the young princess and bargained for her life. He said to King Gezo that, “she would be a present from the King of the Blacks to the Queen of the Whites.” The King agreed and Captain Forbes baptized this little princess Sarah Forbes, after his last name, and Bonetta after his ship.
As time progressed, and with the encouragement of Forbes, Sarah began to learn English and music at an astonishing rate, so much so that by the time of their departure for England, Captain Forbes wrote the following observation in his journal:
For her age, supposedly to be eight years. She is a perfect genius; she now speaks English well, and have and great talent for music. She has won the affections, with but few exceptions, of all who have known her, she is far in advance of any white child of her age, in aptness of learning, and strength of mind and affection: and with her, been an excellent specimens of the Negro race.”
Upon returning to England, Captain Forbes presented Sarah to Queen Victoria at Windsor castle on November 09, 1850.
The Queen must have been impressed for she immediately took a liking to the young princess affectionately nicknaming her Sally.
Princess Sarah was to be provided with an extensive education , a comfortable middle class  lifestyle, an allowance and accessibility to the queen.
Her majesty was to remain a protector and benefactor of the little princess until she was old enough to marry. The following year, Sarah developed a long-lasting cough and the queen thought it best for her health to send her to Freetown, the capital of Sierra Leone. She lived and studied there until 1855 and then returned to England where she was now popularly known in the British newspapers as “The African Princess.”
In 1862, Princess Sarah was a guest at the Royal wedding of the Princess Royal. Queen Victoria sent her several handsome dresses along with all the accessories.
Later that year she received a marriage proposal from
Captain James Pinson Labulo Davies, a wealthy 31-year-old businessman from Sierra Leone. She initially refused his proposal and was sent to live with two old ladies in Brighton, in what she described as  “a desolate little pig sty.”
Queen Victoria then sanctioned Sarah who finally agreed to marry Captain Davies. Their elaborate wedding was held on August 14 at St. Nicholas Church in Brighton.  It was a lavish affair with a wedding party consisting of 16 bridesmaids dressed in white gowns with blue trim.
The bride had a wreath of orange blossoms resting upon her head, which kept her veil in place. The wedding entourage that left West Hill Lodge in Brighton for the church consisted of ten horse-drawn carriages.
At the church, it was the brother of the late Captain Forbes who had the honor of walking the bride down the isle and giving her away.
Following the wedding the newly-weds remained in Brighton for a short time then left England for Sierra Leone. She was to maintain a close relationship with the queen throughout her life.
In 1863, Princess Sarah gave birth to their first child. With Queen Victoria’s consent, the little girl was named Victoria and became goddaughter of the monarch. Her Majesty gave Victoria a gold christening set on which was engraved: “To Victoria Davis, from her godmother, Victoria, Queen of Great Britain and Ireland, 1863.”
In addition she was to receive an education and an annuity of 40 pounds for life.
Upon completion of her visit, Princess Sarah returned to Africa where she gave birth to two other children, Arthur Davies, born in 1871 and Stella Davies, born in 1873.
As time progressed, Sarah’s long-lasting cough became a source of concern for her husband, and in 1880 she was finally diagnosed with tuberculosis. She was sent to the Azores to recuperate, but was too weak and eventually died on August 15,1880 at Funchal, Madeira Island, Portugal.
On learning of her death Queen Victoria wrote: “Saw Poor Victoria Davies, my Black godchild, who learnt this morning of the death of her dear mother.”
Some five years later, in the August 3, 1885 edition of The Standard, Mrs. Burton, a friend of Princess Sarah, said: “Mrs. Davies was now free from all her sufferings. She was prepared and looking forward to be with her Savior. At times she wished to remain for the sake of her family, but she had faith even then to commend them all to their God.”
Another friend, Mrs. Nicholson said, “I shall never forget the deep emotion showed by our beloved Queen when I gave her the letter
announcing Princess Sarah’s death, and the motherly sympathy she expressed towards her, saying with deep feeling, “She was a dear creature.”
Captain Davies, in a loving tribute to his late wife, erected an eight-foot granite obelisk-shaped monument in her memory at Ilos in Western Lagos.
The following is inscripted on the obelisk:
“In memory of Princess Sarah Forbes Bonetta, wife of the Hon J.P.L. Davies who departed this life at Madeira, August 15, 1880, aged 37.
Throughout her life, Victoria was a regular visitor at the Royal household; she would eventually marry Doctor John K. Randle, a Nigerian physician from Scotland. Queen Victoria provided the material for Victoria’s wedding gown. Their descendants are living in Nigeria, Sierra Leone and England.
A book entitled “At Her Majesty’s Request: An African Princess in Victoria England” was published in 1999 by Walter Dean Myers.