Advertise with Us
Home News Community News DREAMERS FROM AFAR 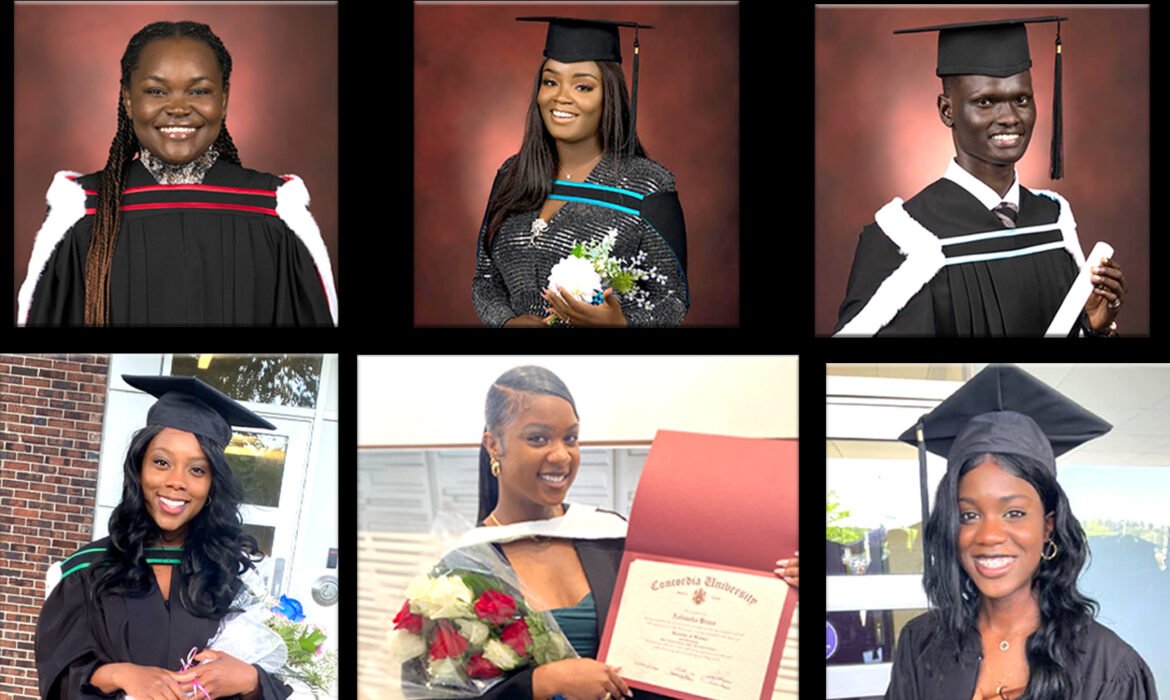 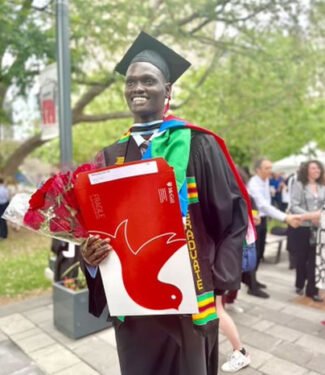 udan’s Makuach village, turmoil and insecurity sent Manyang Lual Jok to Kakuma Refugee camp in northern Kenya. He took the trip with his uncle in 2005 in a truck with other migrants seeking safety from militia attacks.
Whilst at the camp, he enrolled in a school within the camp and continued his elementary school education.

“Having one or two meals a day was normal for me back then and I thought that’s how everyone else lived. Our school was outside we sat on stones and used divided books to write. Looking back, I realize that some of the people working there treated us as less than human. But I didn’t mind it then, I thought it was normal,” he explains to the CONTACT.
For his high school, Jok went to school outside of the camp in Nakuru town which is two hours away from the capital Nairobi. It was here he got to interact with the various people groups from Kenya and at the same time got to appreciate his difference as a South Sudanese.
A conversation on the basketball court with an older friend from South Sudan introduced Jok to the possibility of scholarships. And all he needed to do to get one, was work hard. And when he saw his comrade on facebook in Canada he knew he had to do his best to come here.

“I already had somebody I looked up to and this was someone who was in my situation. He got a good grade and now lives in Canada. I saw that and I wanted it. I knew what the target was, and I had a goal in mind.”

He got an A- at the end of his high school which then enabled him to apply for the
Student Refugee Program (SRP) which offered by the non-profit World University Service of Canada (WUSC).
Jok was selected as one of the 200 students from Kakuma refugee camp and he set off for Canada ready to embrace a whole new world.
He was accepted at McGill University where he studied a double major in Computer Science and Economics. And after four years on May 30 2022, Jok walked proudly across the convocation stage .
As the first person in his family to graduate, Manyang Lual Jok, continues to be an example that hard work and dedication birth greatness. 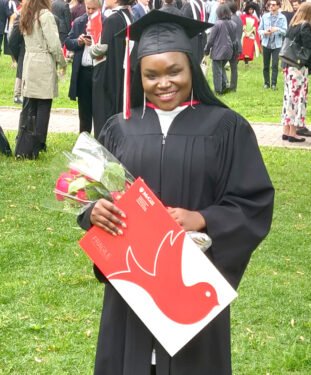 People cannot become what they do not see, Kenyan born, AscarNancy Bako knows this all to well. Her humble upbringing almost made it impossible to dream but if there was one thing she was, it was confident.
From a young age, she knew she was academically gifted and it showed, her elementary and high school were all thanks to scholarships she got for her academic brilliance. Her early upbringing was tumultuous with moments of uncertainty and deep trauma it was hard to think about anything futuristic. At that time, it was about living for the now.
This all changed while at a career fair, lawyers came to her high school and they talked about their career and what it took for them to get to where they were. At this point the wheels started turning in her mind. For the first she allowed herself to dream past what she saw. And the more different people came her paradigm started shifting.

“When we had some civil engineers who came and told us about the profession and how few women they were in the field, I knew I wanted to take the road less travelled. I wanted to become an engineer. I wrote down the grades I needed and stuck them above my desk so that every day I would look at that and work towards it,” she tells the CONTACT
With her goals ringing loudly in her mind, she studied day and night and passed her Kenya Certificate of Secondary Education with an A-grade. With this grade the world was hers for the taking. She applied for various scholarships around in the UK and USA but they were partial and with her financial situation she needed a full scholarship.
By the grace of God as she says, a friend told her about the Master Card Foundation scholarship where she stood a chance of getting into a university abroad to do the course of her choice.

“I had never heard of a country called Canada at this time, “ she says laughing. She applied for the scholarship and was accepted and within moments she was in Montreal Canada at McGill University in the engineering department where she chose to study Civil Engineering with a major in Transportation.
The cold, the culture, the shock greeted Bako as she arrived in Canada. She joined a class of bests and for the first time she wasn’t the best in her class. This coupled with struggles to adjust in a new environment drove her into a deep depression. But she didn’t go down without a fight.

On June 2, she walked across the convocation stage as one who dared to dream and achieved the dream. She hopes to inspire her family and community back home in Kenya, if she can do it, they can too. 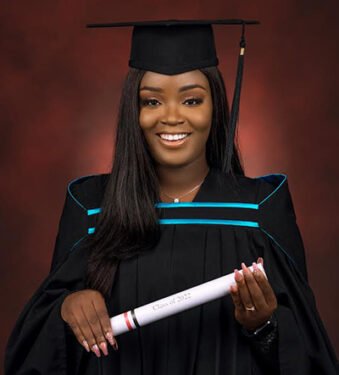 Getting a Master of Arts in Education and Society from a Canadian university was a dream that seemed impossible for Oluwabunmi Amosi. Hailing from Lagos, Nigeria Amosi knew her family’s finances wouldn’t manage to send her abroad to continue with her masters. After graduating with a Bachelor’s degree from Lagos State University she hoped she could get a scholarship more specifically the Mastercard Foundation scholarship.
But this was a flickering hope as she looked around, she felt like the competition around her was steep so the thought of getting into a Canadian university didn’t linger long in her mind. But she went ahead and applied for the Mastercard Foundation scholarship anyway.
And she was found deserving and awarded with a full scholarship to come and pursue a Masters in Education and Society at McGill University.
Because of the pandemic she started the program online in 2020 and the following year she joined the program in person at McGill.

“I was the only black student in my class it was different for me.” She explains to the CONTACT. “I graduated with a 4.0. It was challenging, in the first semester I struggled with a particular course.”

Now as a graduant she looks forward to helping her community .

Sisters Ashana, Ashique and Ashanika Hines are a source of pride

Ashana Hines, graduated with distinction at Bishops university (with Distinction) with a bachelor’s degree in biology with a minor in psychology to pair with her existing Bachelors nursing degree. Despite becoming a young mother, she continued to pursue her education. She grew up in Little Burgundy, going to École de la Petite Bourgogne. Moving to Chateauguay, then finishing at LPP. She graduated from CEGEP de Maisonneuve, she went to Bishop’s University did her degree in the sciences, then finally to Unversite de Montréal.

Ashique went to École de Petite Bourgogne, went to Gabrielle Roy then to LPP. Dawson College, then to Bishops University. Graduated from Bishop’s university (with Distinction) with a Bachelor of Arts in educational studies with a minor in sociology. She is currently teaching in Billing’s and St Ann in Lachine.

Ashanika, graduated from Concordia university (with Distinction) with a Bachelors of Sciences in exercise science minor in Theology studies . Her goal is to get accepted in the Pre-med program at McGill. She wants to be a surgeon. At the age of 23 years old, she is a substitute gym teacher at aprimary schools in the south shore. She is dynamic powerhouse.