Advertise with Us
Home Events Massive Crowd at Trini Day 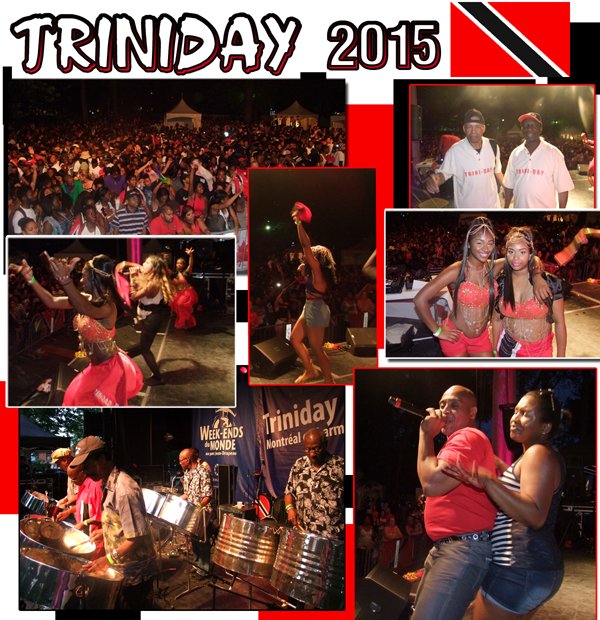 Thousands of young soca hungry fans worked into a frenzy

The colors of the Caribbean were on display at Parc Jean Drapeau on St-Helen’s Island on Saturday, July 11, as Montrealers turned out in massive numbers to celebrate the annual Trinidad and Tobago Cultural Festival and Family Day, or Trini Day, as it’s popularly known.
The day of family activities, which got under way at around 3PM, turned into a crescendo of music and dance by early evening, led by a line-up of local performers, including calypsonians Pufty, Sheryl, Lady B, Loveman Kent, Sweet and Jaalie.
One of Montreal’s oldest performing steelbands, Playboys, gave a scintillating performance, and was well appreciated by the crowd.
Special performances by the youthful sisters Kemba and Ezra Brown brought the crowd up and under the stage and began the jump and wave session.
Featured performers, Connector of Toronto, and Montreal-based Trini soca star, Lesha, delivered highlight performances. Both had the crowd moving to their every command.
And as usual, the true soca session for the evening belonged to DJ Professor who
worked the young soca hungry revelers into a frenzy with a line-up of hits that spanned recent years from Palance to Like a Boss. By the time the event ended at 10:55 the crowd was begging for more.
Organizers Cecil Alfred and Arnold Paris commended the community and all Montrealers for their exceptional participation in making Trini Day 2015 into what they say is : “one of the best outdoor parties in the city.”