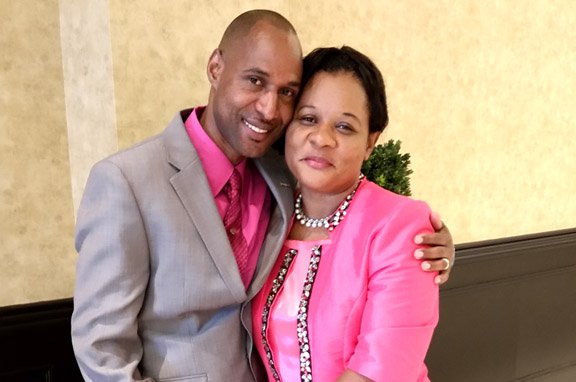 Up at the Montreal West Church of God of Prophecy, which is nestled just outside the de la Savane Metro, on the edge of Town of Mount Royal and Cote des Neiges, there seems to be a free flow of love sprinkling the congregation there.
Ray Johnston, who has been at the church with his wife and family going on 30 years, acknowledges the “good vibes” and places it directly at the lap of two individuals, Pastor Joel Anderson and his wife Myrnelle Sandra Anderson.
“They’ve brought back the love,” he says. “And I call it love in action because they get into your life and they hurt when you hurt and they celebrate when things are good.”
Sister Bernice Gayle, also a long-standing member agrees 100 per cent.
“The Lord has blessed us with a wonderful leader,” is the way she puts it.
Sister Gayle, who holds a number of portfolios at the church, including founder and director of the Montreal West Gospel Choir has been part of the congregation since 1979, says: “along the way we’ve had a couple of good pastors such as Pastor Greenaway… well Pastor Anderson is right up there with him.”
“And the amazing thing is, it’s not just him, it’s the two of them. We’ve gotten a package deal,” says Johnston.
From speaking to others and observation, the love for the pastor and his wife seeps through the entire congregation.
Sit with Pastor Anderson and Sandra for a bit and it’s easy to see why people swoon in their presence.
In fact, Sandra says she spent much of her teenage life admiring the young boy who won the hearts of all the young girls at her church, The Sanctified Church of God in Morant Bay, St. Thomas, on the southeastern edge of Jamaica.
Her dad was a preacher and by the time she and Pastor Anderson were in their mid teens both were baptized and had already pledged their lives to the church and eventually to each other.
Today, almost 20 years since they have been married, they look back on a life together that has been a fairy tale of blessings that have lifted them above all the obstacles that life has thrown their way so far. Those blessings include their three boys, ages 16, 8 and three.
The challenges started exactly six weeks after they were married, when Joel held a steady job at the Goodyear Plant in St. Thomas. The money was amazing and the prospects for the future were bright, especially since Sandra was also doing well as an elementary school teacher.
That’s when the plant shut its doors and sent Joel, together with hundreds of other workers, to the breadline.

But determined to turn that setback into a positive, Joel decided on following through on his lifelong dream of pursuing theology as a career option.
“I was baptized at 16 and not long after was preaching whenever I had an opportunity. So it was something I really wanted to go after,” he told the CONTACT at a sit down at his office at the Montreal West Church of God of Prophesy.
He enrolled at the prestigious United Theological College of The West Indies (UTC), which is affiliated to the University of The West Indies, and is a training ground for aspiring ministers seeking ordination to the protestant denominations.
Although his journey through the college was fraught with challenges, much of which were financial, and an ever-present threat of not being able to complete his training, Pastor Anderson calls his decision to be at UTC a “faith move.”
“It was a difficult period in our lives, but this was something I really wanted to do,” he says.
Just as important, he says, he had the full support of his wife.
Inevitably, he completed his studies and came out of UTC “with flying colors”, but it wasn’t without what they both describe as divine intervention: such as having a lecturer at the school paying off a $60,000 tuition fees balance after a term; then an unknown benefactor depositing $10,000 into his account for several months, and a friend taking him to the Bahamas to secure a summer internship at a church on the island.
After graduating from UTC, Anderson says they had a clearer path to the future.
It started with Joel landing a job as a youth pastor at the United Church in a hard scrabble neighborhood in Montego Bay.
Sandra was also able to secure a position at the local elementary school.
It was something of a baptism by fire for the young couple that found themselves in a poverty and crime-ridden neighborhood helping people to rebuild their broken lives caught in the scourge of crime or the difficulties of early pregnancies.
After three years in that ministry he offered himself as a candidate for full time ministry at the United Church and was ordained in 2007, following which he spent seven years as a full-time minister in another tough neighborhood in Kingston.
“Wherever we go, we make it our mandate to build people and we have been blessed.”
Their journey to Canada and to the loving arms of the congregation at Church of God Of Prophesy came with a lot of twists and turns, as with everything else, it came to past for them.
He says it was his lifelong dream ever since the day someone brought him one of those Maple Leaf Canada t-shirts.
Mrs. Anderson says she never realized how much her husband wanted to migrate to Canada, but made it their mission to do so.
There was a lot of praying, she says. And in the end a family friend affiliated with the church helped them make their way to Toronto.
After a year, the young family made their way to Montreal and fell hopelessly in love with the city and the congregation that came into their charge.
Today, just over a year since they have been here, they have thrown themselves fully into the task of building the church to its fullest potential.
Mrs. Anderson, an accomplished educator, is also a playwright, poet and motivational speaker, and is bringing all those talents to her position as the Youth Director at the church.
She has already been out in the community at Van Horne Park, and has also organized one or two workshops with Brian Smith all aimed at empowerment of young people at the church and in the community.
For his part Pastor Anderson is busy doing what has become his  forte since he entered the ministry…building.
Together, they say their goal is to take Church of God of Prophesy to its fullest potential with a solid Men’s and Women’s Ministry, an effective outreach program and a congregation that is dynamic and well-rounded.
Success, he says, has already been prophesied: “All I have to do is to remain faithful and humble to what God has assigned for me.”