Advertise with Us
Home News Community News Lady Kiki: A Cut Above the Rest

Lady Kiki: A Cut Above the Rest 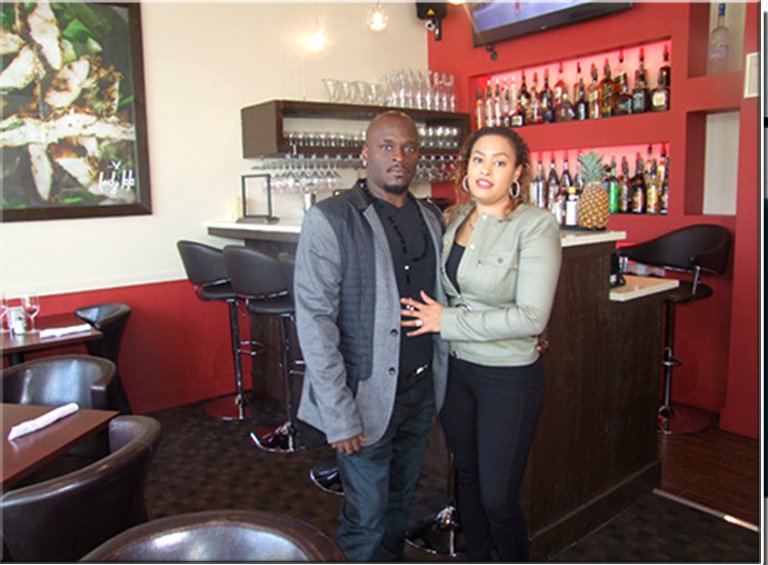 Nestled on the southwestern edge of the city, Vaudreuil-Dorion once was the last little bedroom community you’d gaze at as you made your way out of Montreal towards Ontario.
Well, no more. Because over the past decade or so, the place has become home to thousands of new, young families and dozens of big-named businesses that have transformed it into a thriving and bustling little city.
It’s here that Doug Nesfield and his wife Kira Kurbanali-Nesfield decided to drive a stake in the ground and open their restaurant Lady Kiki, serving Caribbean food mostly to people who know next to nothing about curried goat, jerk chicken, oxtail, fishcakes and corn soup.
Since opening their doors on September 1, the couple has seen a steady increase in the number of people walking through their doors, but most importantly, they are seeing them come back, bringing friends and family with them.
“So far, the feedback has been amazing, thank God,” says Doug. “From the day we opened, we have getting great support from families in the area and others coming from the West Island and other parts of Montreal. And almost one hundred percent of them tell us that the food is great and they appreciate the service that we offer.”
The first thing you notice about Doug and Kira’s place is the décor and ambiance: clean, bright, stylish and if we can say it, young. The theme is burnt amber.
The cushioned chairs and tables and the complete bar set into the place suggest upper scale dining all the way. The restaurant sits 50.
“ If there’s a stereotype for what a Caribbean restaurant looks like, we wanted to step away from it and offer our clients comfort and class,” Kira says. “We know that we’re a cut above the rest and we intend to keep it like that.
It’s easy to see that they spared no expense in doing so.
But it’s the food that’s also drawing rave reviews, as is evident on their Facebook page, which overflows with testimonies of satisfied food lovers who have eaten at Lady Kiki and were blown away by flavors and tastes that have not been experienced in any of the multitude of eating places in that part of the world.
All of this is compliments of the chef, Kira, who makes her way to the restaurant between five and six o’clock almost every morning to begin putting together the day’s menu with a culinary touch described by her husband as “unique.”
“There’s a reason why the food here taste so good,” he says. “You see, cooking is Kira’s passion and she can do it for hours and hours, preparing all different types of dishes, and they will all taste amazing.”
And she concurs: “It’s something I love to do,” adding that she inherited her “sweet hands” (learned to cook) from her grandmother and others in the household in Trinidad and Tobago, where she was preparing full meals in her early teen age years.
In fact, the idea for Restaurant Lady Kiki, named after Kira, came from the many occasions when friends and family were clamoring for more of her food during the regular family B-B-Qs and other get-togethers the couple hosted.
Since opening day, several of Kira’s culinary treats have had clients talking and coming back for more of her jerk nacho entrée, her rotis and the jerk chicken. Her
Kiki Punch has also been a super hit.
However, Doug says it still is much of a learning process for them and clients when it comes to the full appreciation of certain Caribbean delights.
“With certain foods, we have to explain what they are and offer samples,” he says. “Sometime that’s all it takes. That’s the way it was when we first introduced our fish cakes to new clients. They love it.”
As capable as she is in the kitchen, both Kira and Doug admit that they depend heavily on their Jamaican-born sous-chef, Ian Nelson, to bring an additional touch to the delightful Caribbean meals on the menu.
They also credit him for bringing an upbeat and jovial mood that is contagious and usually spreads easily to other staff members and to clients.
And that’s important to Doug, who is particularly big on accommodating his customers and making them feel as if they’re Number One.
“Service is really important to us, and we want to make it the (cornerstone) of our business,” he says.
Looking down the road, Doug and Kira are excited about the way their neighborhood is growing and the potential of Lady Kiki being the place where new families can dine and learn about the Caribbean.