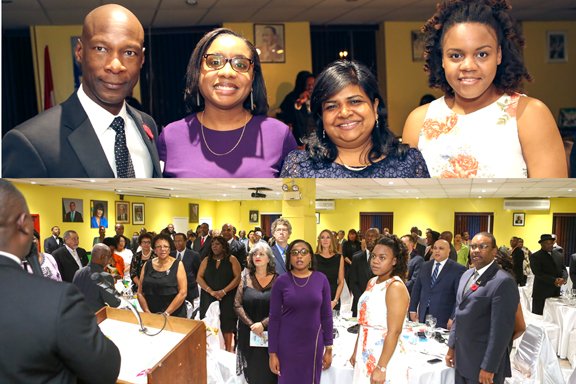 On Saturday, November 5, more than 130 persons filled the Jamaica Association on Jean Talon Street to celebrate Jamaica’s National Heroes.
Organizers applauded what they described as “a moving night, filled with good cheer and happy vibes.”
They say it was “a pleasure to have members of the association, old and new, breaking bread together, but also members of various other groups such as Jamaica National, the Jamaica Ottawa Community Association, Barbados House, and the Cornucopia Association of Canada to name a few.”
People came to celebrate Police Chief Devon Clunis (ret.) who is the first Black police chief in the history of Canada.
Mr. Clunis was a 29-year veteran of the Winnipeg Police Service. He came to Canada from Jamaica at the age of 11 and settled with his family in Winnipeg.
He recounted his life’s journey and inspired all present to live their dreams, for dreams do come true.
During the evening, several individuals received Awards of Recognition for their support and continued positive contributions of the association and the community. They are Jean Stephen of Jean’s Treats, Kenneth Warren and Anthony Campbell of Island Organix.
Organizers also thanked Mr. Clunis for his inspirational speech. And also recognized and thanked the many dignitaries present that evening, including Her Excellency Janice Miller, High Commissioner of Jamaica to Canada, Honorary Consul George Grant, Borough Mayor Russell Copeman, Commandant Mohamed Bouhdid of Station 26 and entrepreneur Barry Danne.
Several top local performers, including Kaisha Lee and King Shadrock were on hand to provide top class entertainment, with additional music from Trevor Campbell DJ aka TLC.
Organizers also extend their gratitude to the many Montrealers who helped add to the success of the evening, such as Pat Dillon-Moore and Howard “Stretch” Carr of CKUT 90.3 FM, for their assistance in promoting the event, and the advertisers who supported their program booklet.
Also all in attendance for their presence and continued support.
The Association will be posting information on Mr. Clunis regarding his foundation in Jamaica and a soon-to-be released book on his life’s journey.