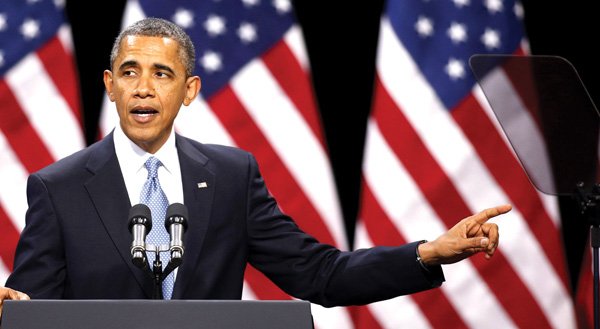 As it has been for much of his presidency, America still doesn’t know what to make of President Barack Obama.
On so many occasions, critics and supporters alike have been tempted to declare his presidency a failure only to be confounded by his ability to seize the moment at critical junctures and display masterful control over the big issues.
Today, his approval ratings stand at 50 per cent, again confounding political pundits and all the bright people, because after months and months of wallowing in the bad books of Americans, the expectation was that Obama would just fade away for the next two years.
He once said: If you’re walking down the right path and you’re willing to keep walking, eventually you’ll make progress.
And so it has been for America’s most unlikely president, who charted a course to bring unprecedented change to politics in the world’s most powerful nation.
But in trying to do so, he spent the last six years in a political fish bowl doing his best to meet expectations of his supporters and build bridges with his detractors. Both groups keeping a constant eye on him looking, and for signs of weakness in the face of the overwhelming pressures of being the first Black in the office.
The haters, led by the Republicans and including an assortment of right-wing types and racists, have never saw good in any of his policies or actions, but no matter how much they try to render him irrelevant, the president continues to out-manoeuvre them on almost every critical issue that has been brought to the table.
His supporters also have had countless occasions to be suspicious of him because of his proclivity to try to be all things to all people at the expense of their mighty investment of trust in him to bring change to a political system that has alienated a significant percentage of Americans.
For a while it was pitiful watching him try to settle into the job and deal with the  %%%%%
The early task of salvaging the American economy, which was in the doldrums and attempting to bridge the political divide with the Republicans took a lot out of him.
And the swagger with which he entered the big oval office soon appeared lame and hobbled as he tried to lead an unruly nation towards what he believed to be the right path.
Along the way, an increasing number of Americans stopped believing in his promise of hope and its possibilities.
For a time his approval rating sunk lower than any other sitting president in history. And under his leadership the democrats were two good shellacking (his word) in two mid-term elections, all of which were supposed to contribute to the irrelevancy of his presidency.
But even when the chips were down, Obama used his keen insights on America and its politics and his iron-willed determination found ways to exercise his mastery of the major issues and make America better.
Now in the tail-end of what is the most polarizing presidency in the history of the USA, Obama appears to have triumphed over doubters on both sides of the divide with a series of accomplishments that will mark him as one of the most significant when history judges.
It started with his Affordable Care Act (Obamacare), described as “the most significant overhaul of the healthcare system in the U.S.” since Medicare and Medicaid in 1965.
The federal legislation singed into law by Obama in 2010 provided insurance coverage to millions of Americans, who were previously unprotected. The Republicans never forgave him.
Another of his master moves came last November when he exacted Executive Order to pass his Immigration Reform Act providing up to 5 million undocumented immigrants protection from deportation.
Also, last November, Obama staked his place in annals of history making one of the most definitive moves in the global environmental debate, when he cajoled China to sign a bilateral deal for both countries to reduce their carbon dioxide emission.
The deal acknowledges that the U.S. and China “have a critical role to play in combating global climate change, one of the greatest threats facing humanity.”
So both countries commit to reduce emissions by 25% to 28% below the 2005 level by 2030.
Last month he followed those two ground- breaking moves with another master-stroke with his initiative to normalize relations with Cuba.
And from the tone of his State of the Union address he seems poised to do the same with arch enemy Iran.
Much of these legacy-type accomplishments come when Obama ignored the clamor of his foes and the suspicions of his friends and acted on what he knows to be right.

He expects push back, especially from  the Republicans who now control Congress, to try to unravel some of  those policies, but he is ready for  them and will veto any move they make.
He should also be conscious of the unspoken expectations of America’s most marginalized ethnic group, Afro Americans… his peeps.
Today, the 39 million or so Blacks have for much of their history in the U.S. been on the margins of that society, figuring prominently among the unemployed and under-employed, most incarcerated and other social ills.
Their on-going abuse at the hands of the police and the justice system is well-documented.
As expected, they silently deposited their hopes for change in the hands of Obama, many knowing full well how difficult it is to move the social levers in a country where many of the institutions are wired against Blacks.
But their hope is if anyone can bring change, Obama can.
So far, iconic Black voices such as Professor Cornell West and political commentator and broadcaster Tavis Smiley say that the Black plight has become worse since Obama came into office.
What they are saying is that he still has some work to do.
So as Obama turns into the final bend in his eight year journey, all eyes are still on the trailblazing  president as he continue on his quest to make a better place out of America, which inspite of its wealth and power is still a troubling society.
How is he going to make it happen is all very confusing.