Advertise with Us
Home News Cuba and The U.S. on the path to warmer relations

Cuba and The U.S. on the path to warmer relations 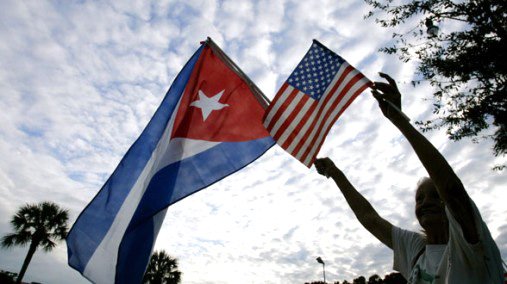 “To the Cuban people, America extends a hand of friendship.”

With those words last December 17, U.S. President Barack Obama launched a new era in relations between his country and Cuba, and in so doing eased regulations on travel and on the transfer of certain goods and services and diplomatic exchanges.
Then he took it to another level with his State of The Union address, calling on his Congress to end the decades-old embargo that has kept the two countries in a state of latent conflict for more than 50 years.
“Neither the American nor the Cuban people are well served by a policy that’s rooted in events that took place before many of us were born,” Obama said in December.
And he reiterated those sentiments in his address to the American people on January 20:
“ In Cuba, we are ending a policy that was long past its expiration date. When what you’re doing doesn’t work for fifty years, it’s time to try something new. Our shift in Cuba policy has the potential to end a legacy of mistrust in our hemisphere; removes a phony excuse for restrictions in Cuba; stands up for democratic values; and extends the hand of friendship to the Cuban people. And this year, Congress should begin the work of ending the embargo. As His Holiness, Pope Francis has said, diplomacy is the work of “small steps.” These small steps have added up to new hope for the future in Cuba.”
The new policies come with great possibilities for the Cuban people who have seen their economy and living standard decimated by the embargo that has been in place since October 19, 1960.
It’s estimated that the embargo costs the U.S. economy $1.2 billion per year in lost sales and exports.
In Cuba, President Raul Castro in a speech, simultaneous to Obama’s on December 15, is receptive to the new policy and repeatedly praised the U.S. president for removing what he described as obstacles to their relations.
But Castro cautioned that with the process of real diplomacy just beginning, “the only way to advance is with mutual respect.”
He made it clear also that his government is still committed to communism as its chosen path to govern.
Obama’s new policy towards Cuba is the most significant change in the relations between the two countries since president John Kennedy imposed the embargo in retaliation for the feistiness of the revolution in the U.S. backyard.
One of the more significant policy changes is the easing of travel restrictions to Cuba that now makes it easier for family visits, and travel for educational and some cultural activities and official U.S. government business. Tourist travel remains banned.
Those who travel are now able to use debit and credit cards on the island and will now be able to return to the U.S. with $400 in Cuban goods, including tobacco and alcohol products worth less than $100 combined.
The U.S. is also increasing the amount of money Americans can send to Cubans to $2,000 every three months from $500.
Also, Cubans might soon have easier access to computers, cell phones and the Internet because of a new policy that authorizes the commercial export of communications devices, software, hardware and the provision of Internet services.
Both the U.S. and Cuba are planning to reopen embassies in Havana and Washington as a way to facilitate better diplomatic relations.
The measures came into effect on Friday, January 16; however, the U.S. Congress can only lift the full embargo.
According to reports, Canada, which has long maintained cordial and strong economic relations with Cuba, played a significant role in bringing this new level of renewed cooperation between the two countries.
Obama singled out Canada for praise because this country hosted a series of meetings between U.S. and Cuban officials on several occasions since 2013.
Pope Francis also played a major role in encouraging the negotiations and mending the relationship. And the Vatican facilitated several of the meetings between the two sides.
Several political prisoners were released as a sign of good faith on the part of both governments. But the deal was not totally glorified on all fronts.
In Miami, many old Cuban dissidents accused President Obama of selling out to Raoul and Fidel Castro.
In Cuba, Granma, the Communist Party daily newspaper cautioned that:
“The measures announced constitute a step in the right direction, but there’s still a long road to travel to disassemble many other aspects of the economic, commercial and financial blockade…”