Advertise with Us
Home Events Food, honor and revival… 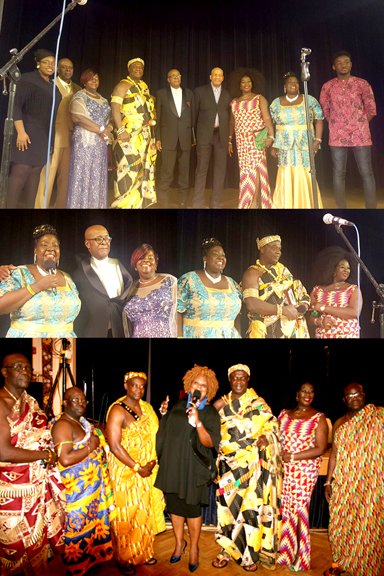 House of Prayer for all Nations  host spectacular evening

On November 11, House of Prayer for All Nations did it again, with their 14th annual fundraiser Banquet at the Schofield Hall in TMR. The night was filled with special guests, three honourees, a king and the power of King of Kings.
For the second year the church chose to recognize those who have made significant and meaningful contributions to the Montreal community. And three exceptional individuals were honoured. The Family and Community Achievement Award was presented to Mr. Barlette Scrubb for his influence and initiative towards the advancement of his family and community; Mr. Egbert Gaye received the Community Excellence award for his exceptional leadership and outstanding service to the Montreal community; and the Community Impact award was presented to Mr. Kingsley Kwateng Amaning (Founder of Mama Africa) for his achievements as an entrepreneur and his contributions to our community.
The presence of Chie Amaning in his traditional attire, adorned with a stunning crown, and his entourage, made it an evening to remember. He also gave a wonderful speech with his Mama Africa standing at his side.
The evening was hosted and catered by the House of Prayer for All Nations’ members and pastoral team who provided a scrumptious three-course meal, serving up some classic Caribbean cuisine that included callaloo soup, curry goat, stew fish and rice and peas.
However, it was Evangelist Bridget Blucher who stole the show, singing tributes to each honouree that included a song in Twi (a dialect of the Akan language spoken in Ghana) for the chief, Mr. Amaning.
As usual, her performance was spectacular, lifting the audience with a joyful praise that quickly filled the dance floor.
It was not long before her pretty blue heels were tossed aside (the stage), and as her title track goes: “give me room, lemme praise my God,” and praise him she did. When her set was done, she thanked the crowd and made her way offstage, but the people wanted “MORE, MORE, MORE…”
She responded favourably to the encore of the unrelenting guests.
It was evident that a revival had taken place in the hearts and souls of everyone in the room. And Evangelist Bridget was an inspiration to all.
Everyone left fulfilled, physically and spiritually.
Save the date, for the second week on November of 2018 for  The House of Prayer For All Nations Banquet… You do not want to miss this event.