From Jamaica to Canada 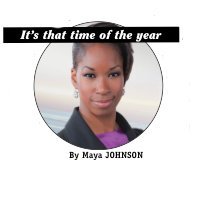 The first week of December, I went downstairs to my storage locker to retrieve my cardboard boxes stuffed with Christmas decorations, ready to go about the task of decorating my condo.
Inside one of the boxes I found the Christmas stocking I’ve had since I was about five-years-old. It’s a typical Christmas stocking – red with white trim. My name is written on it in red, green and silver glitter.
I remember when my mother took me to the Fairview Shopping Mall to have it made. The woman at the store carefully squeezed out “Maya” in cursive letters with the white glue routinely used in elementary school craft projects.
To my delight, she poured sparkles out of a plastic tube in abundance, covering the fresh glue. Once the glue dried, she shook off the excess glitter and, voila, I had a personalized sparkly Christmas stocking.
As I held it in my hand, 25 years later, I was hit with a wave of nostalgia. I found myself reminiscing about the Christmases of my childhood and remembering how happy I was every holiday season and how magical everything seemed to me. Looking at the stocking, I couldn’t help but wonder how my Jamaican parents came to embrace these North American Christmas traditions – hanging stockings, leaving milk and cookies out by the fireplace for Santa.
Aside from the obvious fact there was no snow, I wasn’t really sure what Christmas was like for my parents when they were kids.
So I called them up and asked them.
“We would get money on Christmas Eve and we would go to the local pharmacy – the drug store. That’s where we would go to do our little shopping. Everyone would get their pocket money, and that was a big treat for us,” says my mother, who grew up in the Jamaican countryside, in a small town called Balaclava.
“In the country, in my immediate family, there was nothing about Santa Claus.”
For my father, a Kingston boy, it was different.
“Being the last of 10 (children), I really believed that there was a Santa Claus,” he says. “You would have gifts under the Christmas tree.”
“At Christmas time yu guh to bed early more than any other night, to rahtid, becah yu wan Santa to come,” he adds, breaking out into patois.
It was no secret that many of the gifts under the tree were sent back home by the older brothers and sisters who had immigrated to the U.K. and the U.S. when he was still a small child. Nevertheless, Christmas was always somewhat mysterious and magical.
I ask my parents if they can recall their favourite gifts.
“A dolly,” Mom responds without hesitation. “It was a rag doll stuffed with saw dust, and it had long, wobbly legs.”
She was grateful, because “you didn’t get that many gifts.”
Dad remembers getting a toy car or truck.
“They weren’t battery-operated those times. You’d push and you’d pretend,’’ he says, following up with a series of sound effects mimicking the quick acceleration and sudden braking of the childhood toy powered only by his imagination.
“We were creative at that time. I’m amazed at the cars that Justin and Jayden have now,” he tells me, referring to my six and 10-year-old nephews who have an impressive fleet of high-powered, battery-operated devices.
As for adapting to North American traditions, mom and dad agree it came naturally. After all, they came to Canada as ambitious young adults who envisioned great things for their future Canadian-born children.
“We wanted to make life much easier for them and give them a greater opportunity to take advantage of it, and the only way you can take advantage of a society is adapt to it, and learn how it functions,” says Dad.
“I never ate turkey in Jamaica, but now we eat turkey at Christmas and Thanksgiving all the time, because that’s what Canadians do,” Mom points out.
“Notwithstanding, we’ll have our rice and peas,” Dad chimes in. “We’ve always been Jamaican and we never lost our culture, but you have to adapt to the society that you’re living in.”
At some point in our phone conversation, my mom interrupts me and exclaims: “Oh! They scored another goal?!”
“You guys are watching the game?” I ask.
They are, indeed, watching the Habs play against the Carolina Hurricanes, and mom is thrilled with Alex Galchenyuk’s hat trick. The Habs are winning 4-1 in the third.
Well, watching a Tuesday night hockey game in the regular season pretty much confirms it. From embracing Christmas traditions to Canada’s national winter sport, my Jamaican-born parents who journeyed north determined to adapt have succeeded.
Maya Johnson is a reporter at CTV News Montreal. You can follow her on Twitter @MJohnsonCTV. Her dad is Errol Johnson, Dollard des Ormeaux city councilor and mom is Veronica Johnson, Canada Immigration and Refugee Court judge.