Advertise with Us
Home News Community News Bass is Base 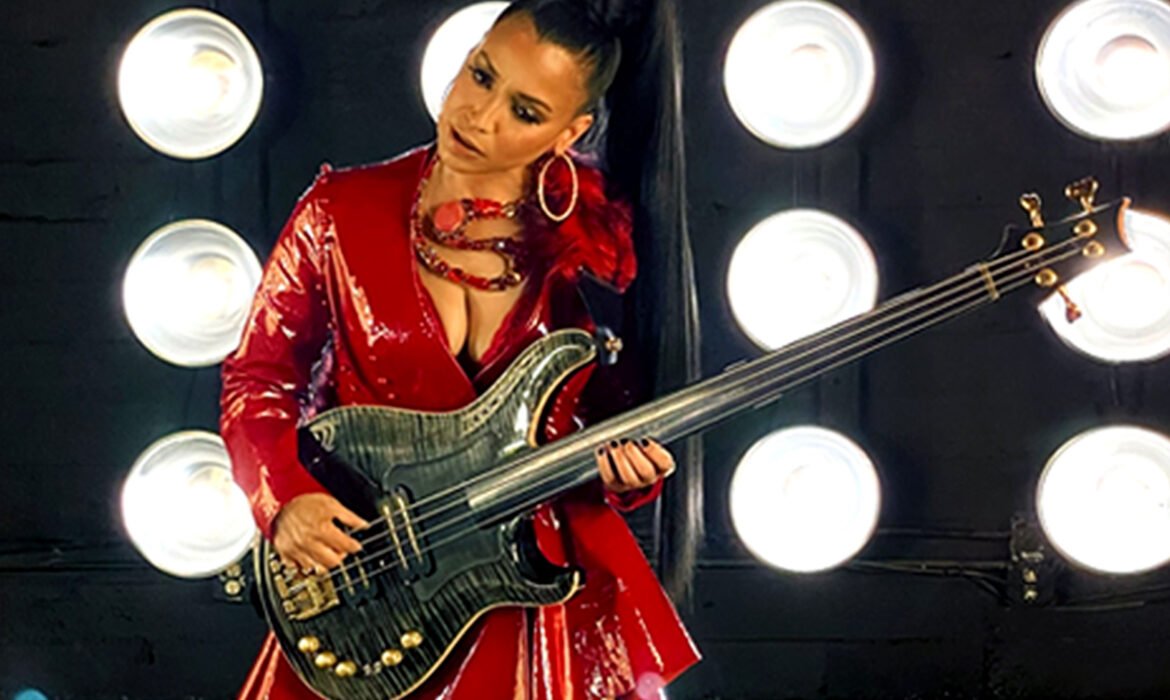 “They keep pulling me back in, Duke”, laughed Rhonda Smith, one of the greatest bass players on the planet.
The Halifax, Nova Scotia born and Montreal raised musician was referring to my remark that other legendary musicians have prevented her from completing her own solo projects by continuing to hire her and her incredible bass playing skills as a side woman.
“It’s hard sometimes to turn down wonderful opportunities to play with amazing people who just want me to be their bass player. I’m just so busy all the time. I’ve had such a great career with so many opportunities here”, Smith shared by phone recently from her current home in California.
“It’s hard to say no. Would you say no? It’s not like I’m laying over here and saying, hmmm, what should I do?” she giggled.
Smith has just released a brand new R’n’B single, “Won’t Come Back”, a soulful ballad about heartbreak, loosely based on a true life experience. 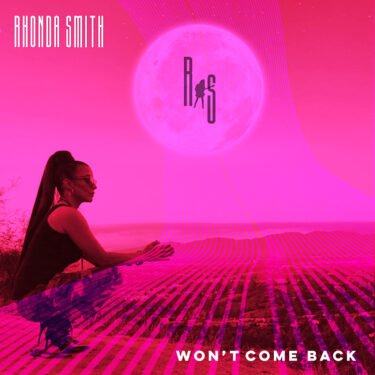 It’s the first offering from a forthcoming album she hopes to complete and release this year amidst her side woman duties.
I told her I’ll speak to Jeff about giving her some time away from him to complete her album, I said only half serious. The Jeff I was referring to of course was rock legend and guitar wizard Jeff Beck.
Smith will head out on tour with Beck again in June(covid willing of course) in what will be her 12th year playing with the multiple Grammy award winner who’s also been inducted into The Rock And Roll Hall Of Fame twice. Once as a member of The Yardbirds and once as a solo artist.
And of course there was the decade she played with Prince but more on that later.
Smith’s primary axe has been the electric fretless bass which tends to bring a jazz tone to her playing. However, her particular style as well as her skill and dexterity on the instrument, has allowed her to even be at home with it in funk, rock and pop.
When I saw her play with Prince in Montreal in 2000 at the jazz festival, she even played a German Vector electric stand up bass that changed colors which added a whole new texture to Prince’s classic-hit “Nothing Compares 2 U” that night.
But after playing bass and making new music of her own, it seems that one of Smith’s favorite pastimes after that is talking about Montreal.
She soon got into that after sharing with me on the phone that she was in the mood for some Greek style lamb for lunch. “I love Mediterranean food. You know why I miss Montreal too? All that shawarma , ooooooh!”
“I moved there(Montreal) in 1976. I remember because we went to the Olympics. A short while after that we moved briefly to Port Hope, Ontario which was just an hour outside of Toronto. I grew up in Beaconsfield. I went to high school in
Smith then romantically reminisced about her time in other Montreal neighbourhoods like Little Burgundy and N.D.G.

“It was an amazing experience. I always talk about how Montreal has influenced my musical career and tastes. It was just a beautiful place musically where everybody supported the music. There was such great jazz music, fusion. There was everything, great R’n’B groups. There was all kind things going on. It was just a great place to want to be inspired to want to play music.”

However, were it not for a slightly older sibling, Smith may not have gone the way of the funk gods but might have become an orchestral woodwind player.
“I’m the youngest of four. My sister played clarinet. My oldest brother played trombone. My brother who was closest to me in age played (electric) bass guitar. So to me at age 11, that was a much cooler instrument to me so I gravitated to that,” Smith chuckled.
“At the moment he brought it home and it was in the case and he showed it, I was all about it and he knew it.” Smith’s older brother whom she had a competitive relationship with had famous words for her that sparked her journey into the world of “bassdom.”
“His famous last words to me were don’t touch it!” I think had he not said that to me, I might have played clarinet”.
Her earliest musical influences were rock stars like, Jimi Hendrix, America, Rush and Led Zeppelin.
Later on as she became more proficient on bass, her older brothers bought her records by jazz fusion bass legends like Stanley Clarke and Jaco Pastorius.
She got a balanced musical education courtesy of her mother who was a jazz fan and would play records by Ron Carter and Ray Brown. Her mother would also bring her to jazz clubs, one of Smith’s all time favorite memories.
Her reputation as a burgeoning bassist started to get around when she was approached by drummer Jim Hillman, who asked her to join his fusion group The Merlin Factor who won a Juno award in 1994 for Best Contemporary Jazz Album.
Not long after while at an industry conference that she attended with her friend guitarist Kat Dyson, she met Prince band member Sheila E, who played on and off with the Minneapolis rock legend over the years as his drummer and percussionist. Sheila was helping Prince assemble a new band to play and tour with after leaving his long-time record label Warner Bros.
Prince was in the middle of recording a triple album for EMI called “Emancipation”.
“We gave her (Sheila) a tape we had and eventually she passed it on to Prince. About three months later I got a call from him while I was living in N.D.G. at the time on Harvard. He wanted me to come out there (at his Paisley Park studio compound in Chanhassen, Minnesota) to meet him and play with him.
Smith went out to Paisley Park and jammed with Prince and a drummer. Prince who at the time had the word “slave” written on his face the first time he met Smith in protest of record label politics, never told her whether or not she had the gig. However he has asked her during the audition to play on a few songs on “Emancipation”.

Smith would join Prince’s band and tour the world with him, including several homecoming gigs in her home town, the first of in ’96 which was attended by her brothers.
Smith would have to learn a couple of hundred songs at any given time because of Prince’s vast catalogue as well as some of his favourite covers by artists like; James Brown, Bonnie Raitt and Chaka Khan to name a few.
Smith was asked to write the fretless bass line for his 1998 single “The One”, which was the most prominent element of the tune. Smith was also very prominent on his 1997 acoustic album “The Truth”.
Smith played with Prince for 10 years and was given some of the most artistic liberties he’s ever given a member of his band.
Prince’s death in 2016 of an accidental Fentanyl overdose still affects Smith until this day.
“I knew something was up. He cancelled a show because they said he was sick. First of all he(Prince) never gets sick and if he ever got sick, he would never tell anybody. When I first heard that my back hairs went up. I said something’s wrong.”
When I asked Smith if Prince’s passing still affects her, she answered in a noticeably somber tone, “yeah a little bit. Yeah that was a special guy she gulped. An incredibly special individual”
Smith, who put out solo albums even during her tenure with Prince, including 2000’s “Intellipop” and 2006’s “RS2” was recommended by her friend, legendary drummer/singer/songwriter Narada Michael Walden to rock legend Jeff Beck.

“In early January I got the call from Jeff’s manager (asking) if I could come to London. They kept calling. In the end I didn’t end up going to London but I ended up in L.A. where I rehearsed with then(Beck’s band). And ironically, the same thing again, I was in a hotel room in New York. All I had was the video “Jeff Beck At Ronnie Scott’s”.

That was the only thing I had to learn all the music because I had to learn the show. I didn’t have an amp in the room. I didn’t have anything. I think I had a little tape player. I had to learn that whole entire show in a couple of days in my New York hotel room and write it down on paper.
In 2019, just before Covid-19 hit, Smith recorded an album with Jeff’s band with legendary actor Johnny Depp on lead vocals. “We recorded it at Johnny’s house. He’s singing on it and it (the album) has some amazing tunes on it. It just hasn’t been out yet.”
As for her amazing new single “Won’t Come Back”, Smith says, “I had some time and I wanted to write just a love song, something emotional about a love gone wrong, specifically with a fretless bass in it because I felt the instrument was getting ignored a little bit. I wanted to hear more of it in contemporary music rather than just in jazz and fusion all the time because I think it’s just a beautiful instrument. It(the song) is based on some truth because usually truth and experience I think has a tendency to talk to people.”
When I told Smith that I loved the song and that it’s sounds soulfully incredible but yet sad, she replied with yet another laugh, “ha-ha-ha well that’s good because it means it’s convincing!”

Rhonda Smith’s “Won’t Come Back” is available at all platforms including her web-site: rhondasmith.com