Advertise with Us
Home News Community News An Appeal for Help

An Appeal for Help 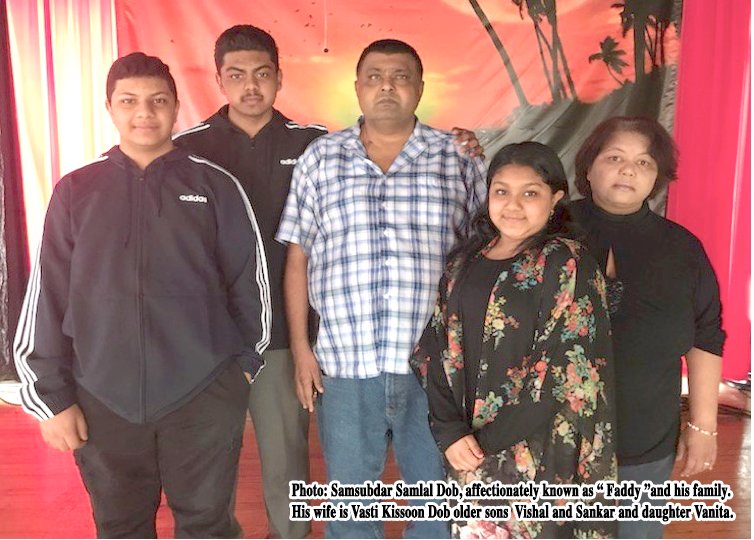 Searching for a donor: Faddy’s urgent need of a kidney transplant

A circle of friends and relatives are gathering around Samsubdar Samlal Dob as the devoted family man (a husband and father of three teenagers) faces his most urgent hour of need.
The 49-year-old Trinidad-born, LaSalle resident known to many as “Faddy” was recently diagnosed with a degenerative kidney disease and is in desperate need of a transplant.
Those around him say his quality of life has deteriorated significantly due to the ailment that has him on dialysis four days a week and unable to work, triggering an urgent appeal from family and a group working on Faddy’s behalf to individuals who might be interested in becoming an organ donor.
Organizers say although organ donation is very complex, with issues of compatibility and the donor’s health, it’s important to put out this appeal to alert the community of this urgent and potentially life saving need.
And they are also launching a fundraising appeal to assist in covering the multitude of medical tests and other procedures that are a part of the organ transplant process, as well as to help Faddy’s wife, two sons and daughter who, due to his condition, have now become dependent on others for assistance to meet their daily needs.
A trust fund is being set up, but in the meantime the management of Caribbean Paradise Restaurant, 8080 Newman Blvd in LaSalle is receiving donations, financial and otherwise, on the family’s behalf.
Since emigrating from Trinidad and Tobago in 1998, ‘Faddy’ has always been a hard worker and community minded and is well known for his services at weekend functions at the restaurant where his engaging personality has won him a lot of friends.
When news of his illness broke a group of those friends immediately rallied to his assistance and formed themselves into a committee to launch the donor-appeal and the fundraising initiatives.
An event is being planned for the next couple of weeks and an on-line crowd-funding appeal will soon be launched.
In the meantime, the call goes out to all to extend a hand to the man and his family who today, more than ever, need the warm embrace of their community.
Info.:  514-363-8080.